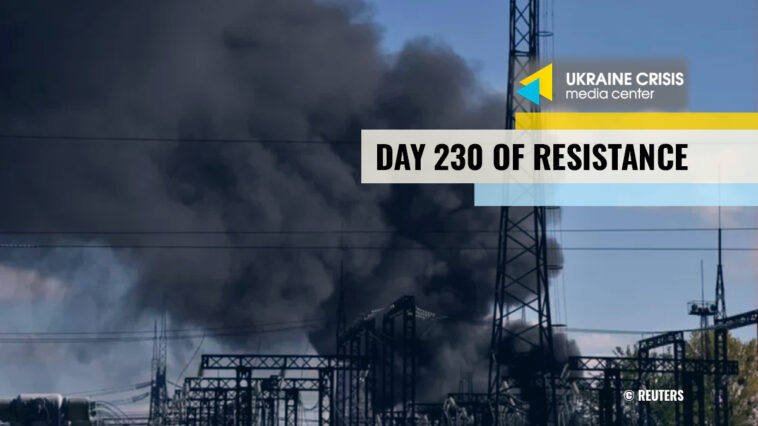 On the morning of October 11, an air raid alert lasted more than five hours all across the country. Ukraine’s air defense systems shot down at least four missiles and several drones in Kyiv, Khmelnytskyi, Mykolayiv, Zaporizhzhia, and Odesa regions.

Speaking during an emergency meeting of the G7, Ukrainian President Volodymyr Zelenskyi laid out a “peace formula” – steps to counter Putin’s goals in Ukraine.

The first point is an air shield for Ukraine, the President said. When Ukraine receives a sufficient number of modern and effective air defense systems, the key element of Russian terror – missile strikes – will cease to work.

The second point is the territorial integrity of Ukraine and bringing Russia to account for the crime of aggression. “Russia must be completely isolated and punished, both politically and sanction-wise,” Zelenskyi said.

Many states will draw conclusions from the consequences facing Russia for its war against Ukraine. A sustainable global security order is at stake, the President said. A tough price cap is needed for the exports of oil and gas from Russia – zero profit for the terrorist state. “Such steps can bring peace closer – they will encourage the terrorist state to think about peace, about the unprofitability of war,” he added. There can be no dialogue with Putin, in the hope that he will respect the agreements, Zelenskyi proceeded.

The next point is security guarantees for Ukraine and a draft model that Ukraine suggested – the Kyiv Security Compact. Russia has also turned Belarus into a springboard for its war against Ukraine. It is trying to drag Belarus into the war as a party, Zelenskyi said.

Ukraine has never had plans to conduct military operations against Belarus. The Ukrainian President urged to deploy an international monitoring mission to the border not to let Lukashenka stage a provocation.

“A mission of international observers may be stationed on the border of Ukraine and Belarus to monitor the security situation. The format can be worked out by our diplomats. And I ask you at the level of the Group of Seven to support this initiative of ours,” the President said.

The war is in its decisive phase. It is important not to fall victim to the Kremlin’s blackmail, Zelenskyi said.

Volyn region: on the border with Belarus. Ukraine in Flames #215

The Volyn region, located in the very northwest of Ukraine, perhaps never troubled itself with the issues of security and defence until its main airport, located in the administrative center Lutsk, was targeted with missiles on February 24. A growing concern is the region’s border with Belarus, a country that has just announced its deployment of troops to the Ukrainian border. What are Volyn government representatives, volunteers, and journalists doing to help Ukraine win the war against Russia? Ukraine in Flames #215 is set to find out.

Armenia vs. Azerbaijan, and how it’s affecting Ukraine. Ukraine in Flames #214