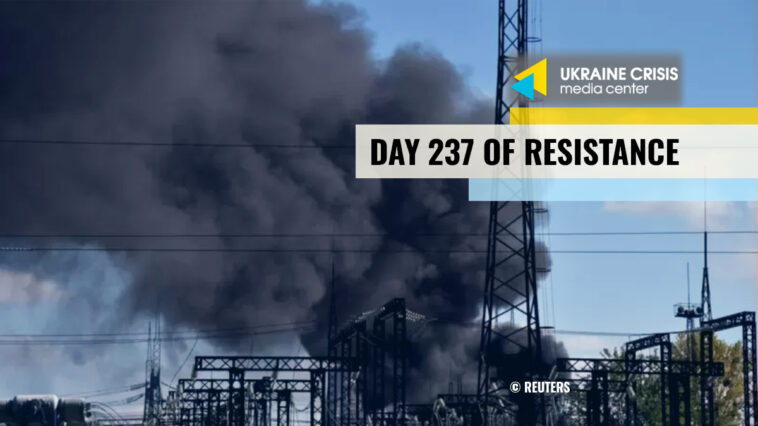 Two thermal power plants were critically damaged. All regions should prepare for planned outages, the Office of the President said. On the morning of October 18, Russia carried out another strike on Kyiv.

“An attack on critical infrastructure facilities killed three people. The sites are heavily damaged. The State Emergency Service does everything possible to overcome the effects [of the strike]. Some areas of Kyiv experienced power and water outages. It’s all been fixed. There is power, and water supply is returning to normal. I ask everyone to be considerate of the situation,” Kyiv’s mayor Vitaliy Klychko said on Tuesday afternoon.

Ukraine to get hundreds of counter-drone systems in coming days, NATO’s Stoltenberg says

NATO will deliver hundreds of counter-drone systems to Ukraine to help it jam the drones and step up the defense of its critical infrastructure, NATO Secretary General Jens Stoltenberg told VG TV.

Addressing the Berlin Foreign Policy Forum on October 18, Stoltenberg reminded that Germany had supplied a modern air defense system IRIS-T to Ukraine. During a recent meeting of NATO defense ministers, other states pledged to provide more air defense systems to Ukraine and supply ammunition for the systems already in use, he said.

Provision of weapons to Ukraine by NATO and other allies halted Russia’s hopes of gaining control of Ukraine’s air space, Stoltenberg said. Ukraine needs various air defense systems to counter all types of threats, including drones, he added.

On the morning of October 18, a Russian missile strike on Kharkiv destroyed a warehouse of humanitarian aid supplies, police chief of the Kharkiv region Volodymyr Tymoshko said. There were no casualties.

“At 8:20 a.m., a strike hit Ukrzaliznytsya’s rail infrastructure site in Kharkiv. [Russia fired] six rockets, possibly S-300, the type of missiles it earlier used to carry out attacks on Kharkiv. The strike damaged railway tracks and warehouses. There were no military facilities in the impact area. The military has never used the site. There were warehouses of humanitarian aid supplies. Six missiles hit targets, and two more were shot down. Their debris fell in other areas of Kharkiv,” Tymoshko said.

Russia is using Iranian kamikaze drones to attack Kyiv, the Ukrainian capital. On October 17th, several drone strikes on Kyiv killed at least 4 people, including a pregnant woman and her husband. Russia is continuing its state terrorism against Ukraine. The increasing number of missile and drone strikes on civilian targets testifies to Russia’s incapacity to win this war on the ground. This is the weekly digest of our “Explaining Ukraine” podcast. Hosts: Volodymyr Yermolenko, Ukrainian philosopher and journalist, chief editor of UkraineWorld.org, and Tetyana Ogarkova, Ukrainian scholar and journalist, in charge of international outreach at the Ukraine Crisis Media Centre.

Foreign media that work on the ground in Ukraine are an important facilitator of the Ukrainian resistance to Russia’s aggression and its propaganda machine. UCMC spoke to several foreign journalists who are currently working or have recently been in Ukrainian cities and learned about their impression of Ukraine and its people amidst the full-scale war – watch Ukraine In Flames #222 and hear their stories.