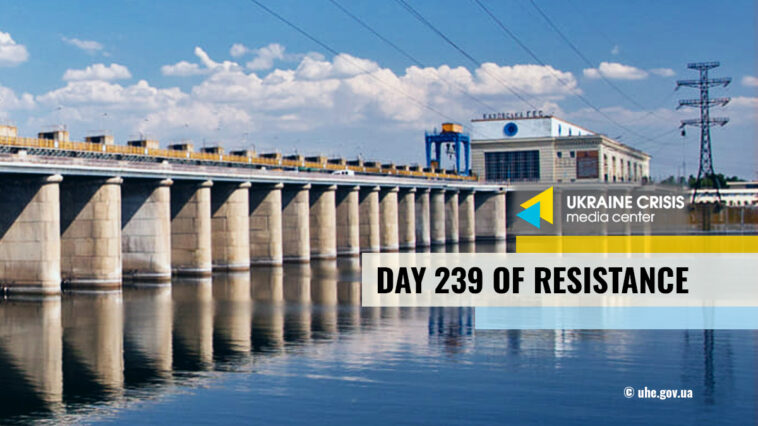 “That is a large energy facility. The dam holds back about 18 million cubic meters of water. If the Russians blow up the dam, more than 80 towns and villages, including Kherson, will be in the flash flooding area. Hundreds of thousands of people may be affected.”

“Water supply to a large part of southern Ukraine may be disrupted. The Russian terrorist attack could leave the Zaporizhzhia nuclear power plant without water for cooling as the plant uses water from the Kakhovka reservoir. Even the canal that was built to supply water to Crimea, the one that Moscow often brings up, will be completely destroyed. That is Russia’s real attitude towards the Ukrainian Crimea,” the President said.

“Environmental, humanitarian, and industrial consequences of the Russian terror act will amount to a historic disaster,” he added. Russia got everything ready for staging the terror act, Zelenskyi said.

Why Russia wants to blow up dam, ISW explains

False accusations by Russia’s commander in Ukraine Surovikin that Ukraine plans for striking civilians and flooding Kherson are likely preparing the ground for a Russian attack on the Kakhovka hydroelectric power plant, a false-flag operation. “The Russian military may believe that breaching the dam could cover their retreat from the right bank of the Dnipro River and prevent or delay Ukrainian advances across the river,” the Institute for the Study of War (ISW) said in a report of October 19.

Russian authorities likely intend these warnings to set information conditions for Russian forces to damage the dam and blame Ukraine for the subsequent damage and loss of life, all while using the resulting floods to cover a third humiliating retreat for Russian forces, this time from western Kherson, the report reads.

In a version that differs from ISW’s Kherson assessment, the General Staff of the Ukrainian Armed Forces said that Russia aims to keep the city. “Intelligence data shows that holding the frontline and halting the Ukrainian counteroffensive in Kherson region are the Russian forces’ top priority in the nearest time,” deputy head of the Main Operations Directorate of the General Staff Oleksiy Hromov said.

Russia plans to deploy the freshly mobilized Russians to the right bank of the Dnipro despite the serious logistical hurdles it faces after the Ukrainian Armed Forces destroyed the key crossings, Hromov said.

Russia has drafted more than 200,000 troops to fight in Ukraine, Deputy Defense Minister of Ukraine Hanna Malyar said quoting recent figures. Russia has mobilized 66 per cent of what it planned, she said.

The direction of the offensive may be changed to the western part of the Belarusian-Ukrainian border, the General Staff added.

“There is a growing threat of Russia renewing its offensive in the northern front. The goal this time may be the western part of the Belarusian-Ukrainian border to try to cut Ukraine’s supply lines of weapons and military equipment from US and European partners,” deputy head of the Main Operations Directorate of the General Staff Oleksiy Hromov said.

Hromov said that Russia is continuing to deploy its aircraft and other military units in Belarus. Belarus is continuing to undertake covert mobilization and to allow Russia to use its territory to launch the drones and ballistic missiles on Ukraine. Hromov said that Russian MiG-31 aircraft had been deployed to Belarusian airfields. The aircraft can carry Kinzhal cruise missiles.

Ukraine was monitoring the situation and bolstering its borders on the northern axis, Hromov said.

De-mining Ukraine will take years, and the mination situation on the ground changes as the war develops. We spoke with the Executive Director of Ukrainian Deminers Association Tymur Pistriuha, Deputy Minister of Internal Affairs of Ukraine Meri Akopyan, and Communications Officer at HALO Trust Ukraine Olesia Fesenko to find out more about this difficult process.