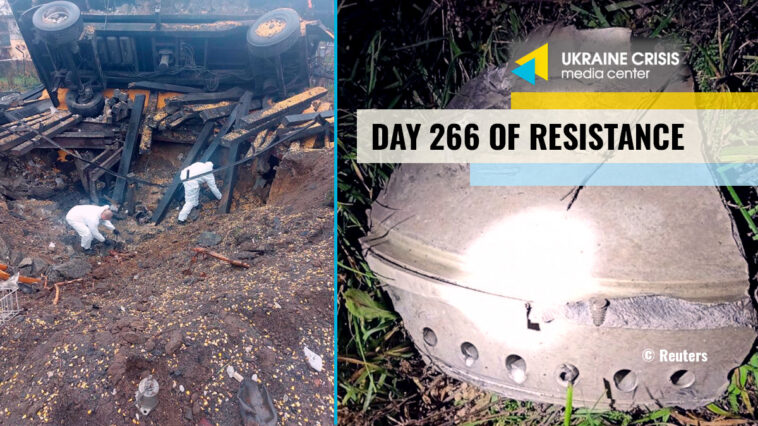 On November 15, at least one missile hit an area where grain was drying in Przewodów, a Polish village near the border with Ukraine, coinciding with Russia’s massive missile attack on Ukraine. Two people were killed. Poland said it might invoke Article 4 of the NATO treaty. The article says that member states will consult together whenever security of another member is threatened.

Poland and NATO did not provide final assessments of the incident. The missile that hit Poland could have been fired from Russia or by Ukrainian air defenses at an incoming Russian missile.

As the investigation continues, U.S. National Security Council Spokesperson Adrienne Watson issued a statement on Wednesday, saying that the U.S. has full confidence in the Polish government’s investigation of the explosion near the border with Ukraine. Whatever the final conclusions may be, it is clear that the party ultimately responsible for this tragic incident is Russia, the statement reads.

“We have seen nothing that contradicts President Duda’s preliminary assessment that this explosion was most likely the result of a Ukrainian air defense missile that unfortunately landed in Poland,” Watson said in a statement.

Polish President Andrzej Duda said that the missile that hit Poland on Tuesday was probably an accident. There is no evidence that it was an intentional attack on his country, he said. He added that it was highly probable that the missile was fired by Ukrainian air defenses.

On Wednesday evening, Russia’s Foreign Ministry released a statement, denying any involvement in the blast.

“I am convinced that we have to be and we will be [part of the investigation]. I want justice, and if [the blast was caused] by our air defenses, I want the proofs. First, investigation, access and evidence,” Zelenskyi said.

He said the command of the Ukrainian Armed Forces and the Air Force had reported to him about the incident, and there was nothing to doubt.

Ukraine should be given access to the site, Zelenskyi said. “Can we wait with final judgements? Do we have the right to be part of the investigation team? Of course we do,” the Ukrainian President said. Ukraine is acting like “a live shield” for the rest of Eastern Europe, Zelenskyi said, adding that he did not hear the Western allies say that. He said he held confidential talks with foreign leaders last night.

Ukraine had not been invited to join the investigation into origins of a missile that struck Poland, Zelenskyi said.

Ukraine returned 103 children who were forcibly deported by Russia, deputy head of the juvenile prevention department of the National Police Yaroslav Shanko said in a news conference at Media Center Ukraine – Ukrinform on November 16.

“According to the National Information Bureau, 11,129 children were illegally deported to Russia. [Ukraine] returned 103 of them,” Shanko said.

The Ukrainian government is working to develop a legal mechanism to return the children who were illegally taken to Russia, he added. As of the morning on November 16, 432 children were killed, and 835 more were injured following Russia’s invasion of Ukraine.

The Russian forces shelled Kupyansk, in Kharkiv region, killing one civilian and injuring a policeman. A 76-year-old woman was killed outside her house as a shell blew her head off. As the attack began, local prosecutors and police were conducting exhumation of the remains of a woman killed in a Russian artillery strike on September 15. A policeman was reported as wounded.