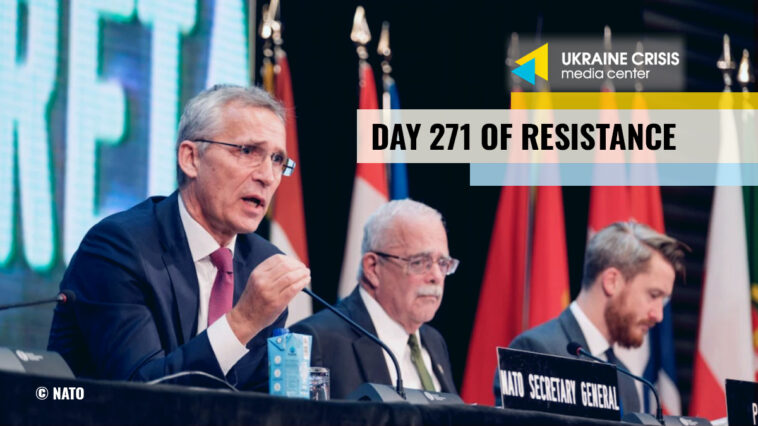 On Monday, November 21, the NATO Parliamentary Assembly (PA) passed a resolution declaring Russia a terrorist regime. The resolution also calls for the creation of an ad hoc international tribunal to prosecute Russia for the crime of aggression [against Ukraine], MP, head of Ukraine’s delegation to the NATO PA Yehor Chernev said.

“All 30 NATO member states backed the proposals of our delegation. Through the tribunal, it will be possible to hold to account not just direct perpetrators of the war crimes, but also Russia’s high-ranking leaders,” he said in a Facebook post. The resolution will be sent to the governments and parliaments of all NATO member states, he added.

In an address by video-link on Monday, Ukrainian President Volodymyr Zelenskyi called on the participants of the plenary session of the NATO Parliamentary Assembly to support Ukraine’s application to the EU and NATO.

“Ukraine is not yet a full-fledged member of the EU and NATO, but I’m addressing you on behalf of the people who have always been, and will be part of the values that you share. (…) You all see the threats facing us – all of us who cannot imagine their life without freedom. You can all see Ukraine’s significant contribution to the protection of our community. You all see how important it is that we really united as a defense after February 24. Thanks to that you also see that Ukraine is destined to become a full-fledged member of the EU and NATO. I urge you to support our applications to the EU and NATO!” Zelenskyi said.

Russia moves part of troops from south to east, but keeps defense in south solid

Russian forces are reportedly beginning to reinforce their positions in occupied Luhansk, Donetsk, and eastern Zaporizhzhia regions with personnel from Kherson region and fresh draftees, the Institute for the Study of War said in a report on November 19.

The Ukrainian General Staff reported an increase in Russian military personnel in Luhansk and towns southeast of the city. The Russian forces deployed 10,000 to 15,000 troops to Mariupol and Mariupol district, advisor to Mariupol’s mayor Petro Andryushchenko said.

Still Russia maintains a large concentration of troops and equipment in the south, head of the joint press center of the Defense Forces of Southern Ukraine Nataliya Humenyuk said on television. “It is not the case that the enemy left their positions in the south vulnerable,” she said. “They are redeploying to other directions to pull out of the range of [Ukraine’s artillery] and have a dynamic maneuver to quickly take positions and strike the Ukrainian Armed Forces,” Humenyuk stated.

Four people were injured in a strike on Kherson, deputy head of the office of the President Kyrylo Tymoshenko said. “Unfortunately, one person died while being transported to hospital,” he said on Telegram. A woman was injured as Russia struck the village of Antonivka outside Kherson. She was taken to hospital, Tymoshenko added.

One week after Ukraine liberated Kherson, it renewed the train connection with the city. Ukraine’s president Zelensky visited Kherson only a few days after the Russians fled the biggest city they had occupied since February 24th. Ukrainians are renewing electricity supply across the country, though its infrastructure was heavily damaged by the Russian strikes. Russian propaganda says the West is afraid of Russia, although the reality is that Russian defeats in Ukraine provoke increasing disappointment inside Russia. Learn more from the weekly digest of our Explaining Ukraine podcast. Hosts: Volodymyr Yermolenko, Ukrainian philosopher and journalist, chief editor of UkraineWorld.org, and Tetyana Ogarkova, Ukrainian scholar and journalist, in charge of international outreach at the Ukraine Crisis Media Centre.

Podcast Explaining Ukraine. Odesa in search of security and identity

Odesa, a city on the Black Sea. One of the most beautiful Ukrainian cities. Always in danger of Russian strikes from the sea. And a key place for global food security, as Odesa ports export majority of Ukrainian food when other ports are occupied by Russia. We visited Odesa some time ago to understand how this city is living. Hosts: Volodymyr Yermolenko, Ukrainian philosopher and journalist, chief editor of UkraineWorld.org, and Tetyana Ogarkova, Ukrainian scholar and journalist, in charge of international outreach at the Ukraine Crisis Media Centre.

Learn more from the new episode of the Explaining Ukraine podcast. This conversation is hosted by Tetyana Ogarkova, a Ukrainian scholar and journalist, and head of the international department at Ukraine Crisis Media Center. Tetyana’s guest is Olena Orzhel, chief scientific officer at the Institute of Higher Education of Ukraine’s National Academy of Educational Sciences.

Crowdfunding for Victory: how donations save lives on the frontlines. Ukraine in Flames #255

While Ukrainian defenders are doing the impossible, fighting on the frontline, Ukrainian civilian volunteers and charity funds are doing their best to provide supplies for the army. Watch Ukraine in flames #255 to understand how crowdfunding contributes big time to the defeat of russian aggression