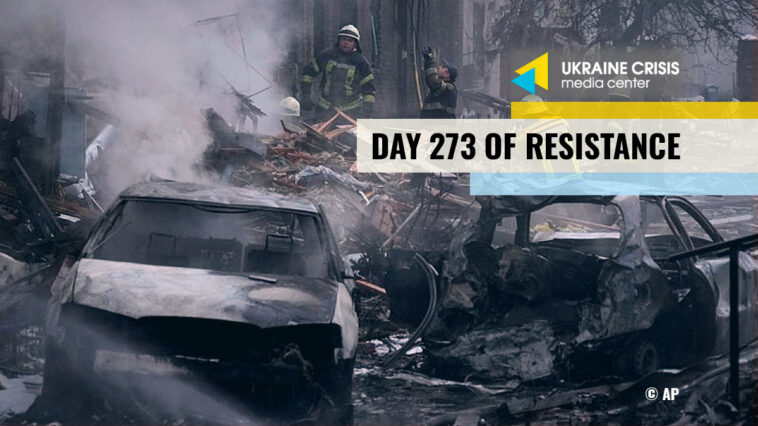 Ukraine’s air defenses shot down 51 out of 70 missiles and five self-destructing drones launched on Wednesday. Ukraine’s Air Force command said: “On November 23, a terrorist state once again carried out a massive missile strike on Ukraine’s critical infrastructure. [Russia fired missiles] from bombers and ships of the Black Sea Fleet.”

“Missiles were fired from 10 Tu-95MS strategic bombers flying over Volgodonsk in Rostov region and the Caspian Sea, and two missile boats in the Black Sea,” the Air Force said. Russia launched about 70 cruise missiles of the Kh-101/Kh-555 and Kalibr type.

Six Ukrainians were killed and 36 more injured in Russia’s missile attacks on Wednesday.

Overnight into Wednesday, November 23, a Russian missile attack destroyed a two-story maternity building in Vilnyansk, in Zaporizhzhia region, killing a two-day-old baby. A mother and two doctors were rescued from under the rubble.

“A newborn baby was killed in a Russian strike on the maternity ward of the hospital in Vilnyansk. His mother was injured. She is in a fair condition. Yet that’s just her physical condition. She’s getting psychological help,” Health Minister Viktor Lyashko said in a comment to Ukrainska Pravda.

On November 23, there were power outages in parts of Moldova as Russia launched missile strikes on Ukraine’s energy infrastructure.

Power was out in parts of Chisinau, Balti, in several more cities, and Transnistria, Newsmaker said.

“Russia plunged Moldova into darkness. Russia’s war on Ukraine kills people, ruins houses and energy infrastructure. (…) We cannot trust a regime that takes power and heat away from us, and deliberately kills just to keep other peoples in poverty and humiliation. However difficult life may be now, our only way, Moldova’s way into the future is toward the free world,” Sandu said.

Ukraine’s President Volodymyr Zelenskyi wrote on Twitter that he had instructed the Ukrainian ambassador to the UN to request an urgent meeting of the UN Security Council following Russia’s missile strikes on Wednesday.

“I have instructed our Ambassador to the UN to request an urgent meeting of UNSC following today’s Russian strikes,” Zelenskyi said.

“Murder of civilians, ruining of civilian infrastructure are acts of terror. Ukraine keeps demanding a resolute response of international community to these crimes,” the President twitted.

Turkey: Choosing between Ukraine and Russia? Ukraine in Flames #258