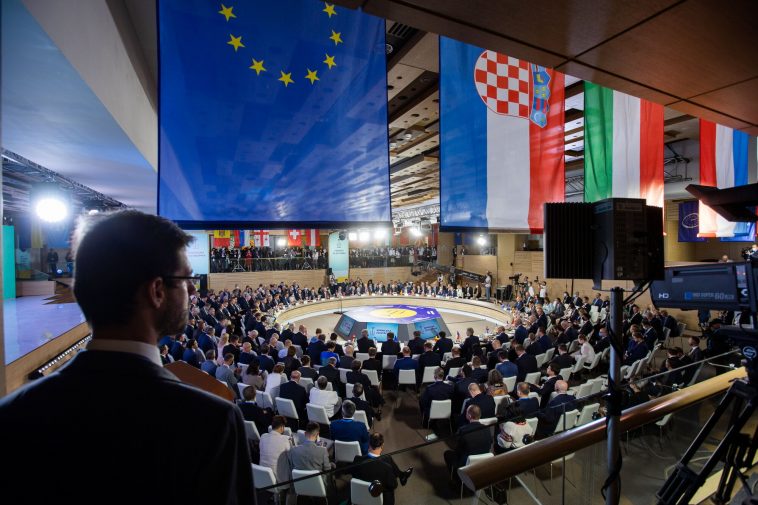 On August 23, 2021, Kyiv hosted the founding summit of the diplomatic initiative Crimea Platform.

Launched by the Ukrainian government as a negotiation platform, the Crimea Platform serves the goal of coordinating the actions of Ukraine and its international partners aimed at protection of the rights of Crimeans and deoccupation of the peninsula. A total of 46 participants, representatives of individual states and international organizations took part in the first summit of the Crimea Platform. We take a look at who came to vow their support for the Platform, what statements they made, what the Platform’s joint declaration affirms, and what Ukrainians’ views of the future of the peninsula are.

Summit participants: who came to vow support for Kyiv?

A total of 46 participants, representatives of individual states and international organizations took part in the summit. Participating states of the Crimea Platform represented by their presidents were Latvia, Lithuania, Estonia, Poland, Slovakia, Hungary, Moldova, Slovenia, and Finland.

Presidents of the Parliament represented Switzerland and the Czech Republic.

The President of the European Council and the NATO Deputy Secretary General participated in the summit.

Germany was represented by the Federal Minister for Economic Affairs and Energy Peter Altmaier.

The U.S. was represented by the Secretary of Energy, Chargé d’Affaires ad interim at the U.S. Embassy Kyiv, and Assistant Secretary for International Affairs at the U.S. Department of Energy.

“The sheer number of the participating states proves that the NATO member countries and the EU member states, and other partners keep the issue high on the agenda. All those states will sign the final declaration. From the diplomatic standpoint, that’s of utmost importance, those are the countries that will continue sharing our position. That final declaration is very important,” underscored Valeriy Chaly, Chair of the Board at Ukraine Crisis Media Center, Ambassador of Ukraine to the U.S. in 2015-2019 during the discussion of the results of the nationwide survey of Ukrainians’ views of the future of Crimea conducted by the Ilko Kucheriv Democratic Initiatives Foundation and the sociological service of the Razumkov Center.

Sixty-one per cent of Ukrainians say that Crimea belongs to Ukraine. Fifty-seven per cent say a Crimean Tatar autonomy needs to be created after the peninsula is liberated from Russia’s occupation, a nationwide survey conducted between July 29 and August 4, 2021 by the Ilko Kucheriv Democratic Initiatives Foundation and the sociological service of the Razumkov Center finds.

How does Ukraine restore sovereignty over Crimea? Forty-seven per cent of Ukrainians that consider realistic the prospects of Ukraine’s restored sovereignty over Crimea say tougher international sanctions against Russia achieved through diplomatic efforts are most efficient. Forty-six per cent say reforms and economic well-being on mainland Ukraine will motivate Crimeans. Negotiations with the Russian Federation (12 per cent), complete isolation of the peninsula with contacts cut off (13 per cent) are viewed as least efficient ways to deoccupy Crimea.

Main political statements made at the summit

Remarks by President Zelenskyi, Prime Minister Shmyhal, and Head of the Parliament Razumkov. In his opening remarks, President Zelenskyi said that Crimea has been occupied for 2,741 days. “We cannot lose another day,” he added. Ukraine will not free Crimea without international support, Zelenskyi said. Ukraine “is determined to do everything to return Crimea,” he added. “Ukraine and me personally will make each and every effort to restore the sovereignty over Crimea, so that Crimea becomes part of Europe alongside Ukraine. We will resort to all available political, legal and, primarily, diplomatic means,” Zelenskyi said. The toll of over 100 political prisoners, suppressed freedom of expression, forced demographic changes, and illegal drafting of Ukrainians to the Russian army make up the sad reality of the Russian occupation of the peninsula, the President said.

Ukraine’s losses from the illegal annexation of Crimea exceed USD 100 billion, Prime Minister Denys Shmyhal said. Ukrainian government has elaborated the strategy for deoccupation and reintegration of Crimea, it is also expected to address human rights violations in the peninsula, the Prime Minister said.

According to the Head of the Parliament Dmytro Razumkov, the Crimea Platform “is not yet another summit”, but “an active mechanism deployed to serve Ukraine and uphold the rule of law in the modern world.” “The Ukrainian flag has to fly over Ukrainian Sevastopol,” Razumkov added.

Remarks by the leaders of the EU and NATO. Since 2014, the European Union has dedicated over EUR 16 billion to Ukraine, said President of the European Council Charles Michel. “Our aim is to make sure that the illegal annexation will in no way be legitimized,” he added. The European Union will continue to enforce its non-recognition policy of the illegal annexation of Crimea. Michel called on Russia to stop the forcible integration of the peninsula into its mainland.

The Ukrainian people have chosen the path of freedom, democracy and Euro-Atlantic integration, said NATO Deputy Secretary General Mircea Geoană at the Crimea Platform summit in Kyiv. “NATO stands firmly by your side,” he added. “NATO strongly condemns and will not recognise Russia’s illegal and illegitimate annexation of Crimea. Crimea is the territory of Ukraine and we call on Russia to return control of the peninsula to Ukraine,” the Deputy Secretary General of NATO said.

The security situation in Crimea, eastern Ukraine, the Black and Azov Seas affects us all, he underscored.

Russia’s actions have brought suffering and loss to the Ukrainian people. And they undermine international law and threaten the rules-based international order, Geoană said. He reminded that at the June summit, NATO leaders reiterated the decision of the Bucharest Summit that Ukraine and Georgia will become members of NATO.

Remarks by leaders of participating states. The leaders unanimously said that the annexation of Crimea in 2014 was illegal, and Ukraine holds the right to restore its sovereignty and territorial integrity. Speaking after President Zelenskyi of Ukraine, the President of Latvia said the occupation of the peninsula was a “brutal violation” reminiscent of the 19th-century politics rather than the 21st-century course.

That politics should not be accepted, the President of Latvia emphasized. President Duda of Poland started his intervention speaking in Ukrainian. “Poles understand your situation, your feelings and suffering,” the President said. Ukraine needs solidarity. “We do not recognize the illegal occupation of Crimea and Sevastopol. We know how indifference pains. We felt that in 1945 when the Allies betrayed us abandoning us with Stalin behind the iron curtain,” Duda said.

Crimea is inseparable from Ukraine, President of Moldova Maia Sandu said. Its illegal annexation by Russia is a blatant violation of international law. Moldova has been Ukraine’s trusted partner, Sandu reassured.

Lithuania stands ready to reinforce the sanctions against Russia until Ukraine restores its sovereignty over Crimea, said President of Lithuania Gitanas Nausėda.

“We are united by our vision that the rights of Crimeans should be fully restored, in line with international law. We all remain committed to Ukraine’s territorial integrity and sovereignty. We will work to reinforce the sanctions and strengthen international efforts until Ukraine restores its sovereignty over Crimea,” Nausėda said.

The United States will keep sanctions on Russia in place until Russia ends its occupation of Crimea and its aggression in eastern Ukraine, said Secretary of Energy Jennifer Granholm at the Crimea Platform summit in Kyiv.

“The United States of America is proud to be here to participate in and support the Crimea Platform. Let me be clear – we stand with Ukraine and with all you in condemning the illegal annexation of Crimea. (…) And we will continue to support the Crimea Platform, keeping true to our long-held view that Crimea is Ukraine, will always be Ukraine… and that Russia must be held accountable for its aggression,” Secretary Granholm said.

On behalf of President Biden, she reaffirmed the U.S.’s support for Ukraine in its efforts to advance reforms, to achieve it’s Euro-Atlantic aspirations, and to deliver a better future for all Ukrainians.

Germany will continue to enforce the non-recognition policy of the annexation of Crimea and will support the sanctions against Russia, said Federal Minister for Economic Affairs and Energy Peter Altmaier. “Germany does not recognize and will not recognize the illegal annexation of Crimea by the Russian Federation. We understand that the annexation has created a huge problem in the region, so the EU has imposed sanctions, and extended them a number of times. It will continue to extend them further as long as the reason for the sanctions stays,” Altmaier said.

The Minister condemned the repressions against the Crimea Tatars and ethnic Ukrainians by the Russian authorities. “The annexation of Crimea is an outrage against the rule of law. We will not let turn Crimea into a blind spot on the map. We stand together with Ukraine, and we call for negotiations, and the need to restore the international order”, Altmaier said.

“On behalf of Emmanuel Macron, the President of the French Republic who delegated me to attend the summit, I would like to underscore three key points. Let me remind that France does not recognize the illegal annexation of the Autonomous Republic of Crime and Sevastopol by the Russian Federation. We have been consistent in our support for the territorial integrity of Ukraine. The situation represents a threat to the international order,” Riester said.

France is concerned with the situation in Crimea, systematic violations of human rights, particularly of Crimean Tatars. “Russia is responsible [for those violations – edit.], as it has occupied the territory,” the Minister added.

President Volodymyr Zelenskyi with a bit of irony invited Russia to join the Crimea Platform to work out joint ways toward the deoccupation of Crimea. “The Russian Federation did not take part in the summit, but it was so active in discussing, commenting, and reacting that it created an impression that it did participate in the Crimea Platform.”

“If it has so much interest in the platform, we invite the Russian Federation to join the Crimea Platform to jointly work out the ways of deoccupation of Crimea, and we invite it to correct the historic tragic mistake it made.”

“I promise that in the declaration of the summit that condemns the occupation of Crimea there will always be a line for the signature of a representative of the Russian Federation. The signature will likely be put at the last summit of the Crimea Platform in Yalta,” President Zelenskyi said.