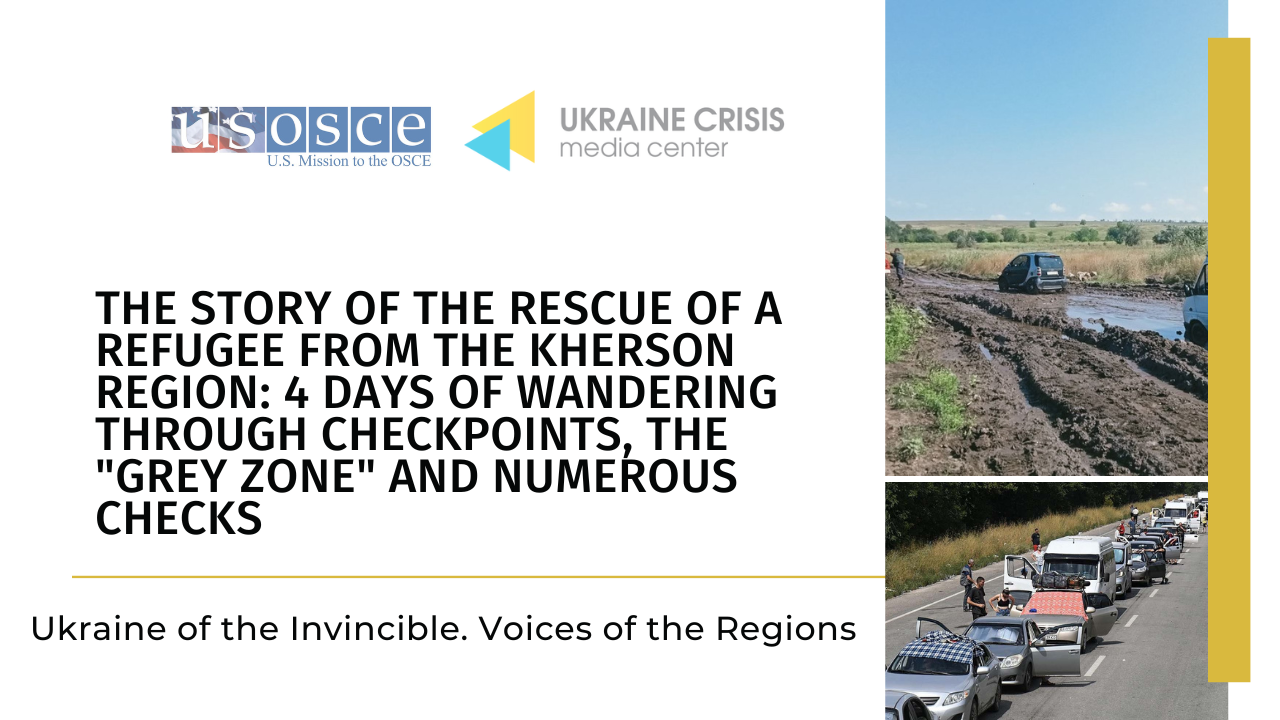 For thousands of people from Zaporizhzhia, Kherson, and partly Donetsk regions that were ready to flee from the occupation into the arms of their native Ukraine, Russia’s invasion made Vasylivka on the Dnieper not just the only place of salvation but also a territory of tough ordeal.

Not everyone can go through it. Ivan Fedorov, mayor of Melitopol, said: “Evacuation is rather harsh now. Yesterday, a newborn baby with sunstroke was taken to hospital because the occupiers did not let it leave the checkpoint for two days. We know for sure that ten people who waited for evacuation have already died.”

Oleksandra Andriyenko (first and last name changed for security reasons) was lucky. Despite the risks, incredible physical stress and psychological pressure from the Russian occupiers, she managed to get to Zaporizhzhia. Her story is another proof of what Ukrainians can do to remain free.

Like everyone in the Kakhovka district, she found herself under occupation on February 24, in the first hours of Russia’s invasion. Ways to leave were immediately cut off and she had to stay in the territory taken over by the Russians. However, after the orcs assisted by local collaborators began to form a “new government”, it became very dangerous to stay, and Oleksandra had to evacuate without delay.

“Having been under occupation for so long, I realized that I had to be ready for any developments. So, by the time of my departure, I had already been monitoring information on Telegram channels about evacuation conditions from the Kherson and Zaporizhzhia regions for about two months. I monitored the carriers and packed a suitcase.”

Nevertheless, Zero Hour came unexpectedly, and packing was very fast. In the evening, she had a phone talk with a friend who also had to evacuate, and in the morning they left for Zaporizhzhia together.

“Olia (the car owner’s name) and I agreed on how to behave at Russian checkpoints and how to answer questions. We were sure they would ask us why we had decided to leave the occupied territory. Our legend was simple and true: we are going to Zaporizhzhia to look for work. When asked if we planned to go back, we said: definitely, as soon as the situation in the Kherson region stabilizes. But the Russians did not specify what kind of stabilization we expected.”

At peacetime, it was quite simple: Kakhovka – Melitopol – Vasylivka – Zaporizhzhia. The distance is 375 km so the journey takes about 3-4 hours. But that was at peacetime.

“It didn’t take us long to go through the checkpoints from Kakhovka to Vasylivka. According to the standard procedure, they greeted us politely, and then according to the instructions, checked our car and documents. First of all, they paid attention to registration stamps and inspected the trunk and interior of the car.”

When speaking to the Russian military, they followed the main recommendation of those who had crossed the demarcation line before: tell the truth if possible so as not to arouse suspicion or additional questions.

“Olia and I hardly looked like drug dealers or explosives dealers, at most like tomato sellers from Velyki Kopany, so it didn’t take us long to go through all those checks. Only at the entrance to Melitopol, an Asian-looking orc asked us at length where and for what purpose we were going, and then advised us to get a job in public catering establishments of Melitopol and not to go to the territory of Ukraine in search of work. He”recommended” it so persistently that we had to drive to the city, and then meander around the streets of Melitopol to get to the Zaporizhzhia highway.”

Money, documents and arrangements do not guarantee of a quick exit from the occupied area

On some days, over 5,000 cars gather near Vasylivka, and they stand for 3 to 5 days on average, or even more. It is currently the only corridor through which you can exit the occupation area, and it is not entirely safe, because the “gray zone” is now and again shelled by the Russians.

“The driver of the Daewoo Lanos, behind which we parked, told us to go to the gas station and sign up for the exit queue. He also added: “Remember to take a photo of the registration list because there are plenty of mountebanks and swindlers here – some sell places in the queue, others get into the evacuation convoy without registration. You must watch out and get to know the “ten” right away.”

At one of the gas stations, they form convoys to leave, check documents, cars, office equipment and mobiles. Vehicles make four columns: general, privileged, paid and trucks. One day there was also a fifth column made of buses, because there were too many them.

Everything is clear with the paid column: pay – pass. But there is no fixed tariff. It varies depending on the solvency of those who decided to speed up their departure. One day the prices ranged from $100 to 300 per car, and the next day they rose to $500.

“But neither documents nor money is a 100% guarantee that you will pass the Vasylivka checkpoints in one day. It all depends on the Russians’ mood. We spent four days in the line, and there were no privileged and paid exits the first two days – the orcs were in low spirits.”

Thousands of people come to Vasylivka daily and leave their “waste products” and garbage – right on the side of the road and around broken and looted gas stations and supermarkets.

“Tons of rotting and smelly garbage and a public toilet everywhere without division into “W” and “M” are the first things we saw and smelled on entering the WOG gas station. And all this against the background of the southern heat, when the temperature reaches 45 degrees and the scorching heat makes paving stones feel like a well-heated stove. You cannot hide in the shade of trees or forest belts along the side of the road – everywhere is public toilet.”

But no one turned on air conditioners, if they were in cars, – we had to save fuel. People did not know what was ahead, and the Russians allowed taking only 20 liters of fuel. To lower the heat, we covered the cars with blankets, sheets, pieces of polyethylene or foil.

“Olia and I, like most refugees, hid from the heat in the shade of our car and moved around it during the day following the shade to avoid the scorching sun. The sunscreens we took with us turned out to be ineffective and did not save us from sunburn. Neither did the cream against the bites of mosquitoes and insects flying in clouds over piles of rotting garbage.”

A dream that was a torture

They slept in “paradise” conditions because there were two of them in the car, so there was more than enough room to sleep. The neighbors in the parking lot did not have such “comfort.”

There was no room for mothers, so they spent all night walking near the car, and then took turns in the daytime to take a nap in the car, because they could not fall asleep in the terrible heat and had to watch over their children all the time.

Bus passengers spent all night in their seats. A granny from the Mercedes bus lay down by the roadside near the bus. Our dog ran into her when he dashed to do his things at night.

These are just a few examples of how refugees spent the night at that gas station. They spent the next three nights at the other one, where convoys were formed to exit the area.

“On both sides of the gas station, vehicles lined up in rows of 10 cars each. At night, everyone was in cars, because the russians forbade sleeping outside. And during the curfew, a military patrol walked between the cars. That’s probably why spending a night at the WOG seemed quite comfortable to us compared to BRSM.”

Water was worth a fortune

Those planning to leave the occupied territory through Vasylivka were warned in Telegram channels about the need to stock up on drinking and technical water. It was advisable to take frozen water so that it would be cold longer, 10-12 liters per person. But, as it turned out, even that amount of water was not enough.

Only once in four days did the russians bring a barrel of technical water. Then we had to really forage for water.

“A frisky ten-year-old boy from a nearby car conducted a detailed survey of the area and said the bus drivers showed where we could get water from, but we couldn’t drink it, only wash our hands. It turned out that the water was taken from fire reservoirs behind the gas station, next to a pile of garbage. Several-meter-long pieces of wire had been screwed to the iron hatch covers of those fire reservoirs and clipped plastic bottles were adjusted to draw oily water.”

Those who had cash could afford to buy food and drinks. But for people who flee from the occupation and have spent all their money to move out, buying a hot meal is not cheap. Because in most cases, whole families leave. It costs at least UAH 1,200 for a four-person family to have three meals a day. Therefore, most of those who travel through Vasylivka take food with them. It is frozen and cooled so that it does not go off as long as possible.

The only reply was silence

Finally, after two days of wandering near Vasylivka, a russian officer came and said that their ten cars were allowed to leave.

“Already at 7 in the morning we were in a convoy formed to leave. We had the documents checked several times and the cars in the convoy were checked according to the list. They warned us about the need to take our laptops and computers to the nearby checkpoint for inspection that lasted from 10 minutes to an hour.”

However, even after fulfilling all those requirements, the russians allowed only 30 cars to proceed to Zaporizzhia on that day, and the travelers again stayed overnight at the gas station.

Morning of the fourth day. Another order to prepare the cars for leaving at 7 a.m.  However, an hour passes, two, three – there is no movement. No one knows why they don’t allow the vehicles to pass. At 11, a russian officer comes and says that it is necessary to clean the roadside and gives garbage bags to drivers. We wait for two hours while they clean the roadside. Then there is a lunch break at the checkpoint, and we are waiting again, because apparently the military commandant said that the convoy would be allowed to pass at 5 p.m.

More than an hour under the scorching sun, and finally the convoy began to move. Ahead was a destroyed bridge over the Karachokrak River and a bypass road through the “gray zone.”

“We were somewhat lucky, because after heavy rains, that road had been impassable a week before, but we managed to travel that dangerous section of dirt road almost without incident. Finally, 30 kilometers of the “grey zone” were left behind, and the road to Zaporizhzhia lay ahead of us. Although it was broken by explosions in some places, it was a shortcut to our freedom, to Ukraine.”