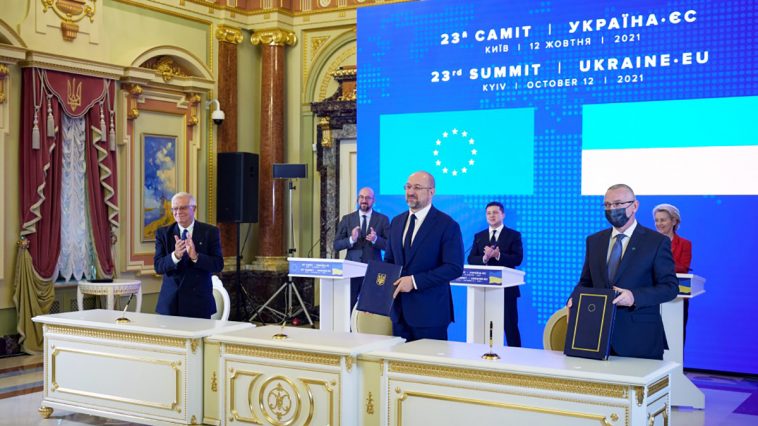 On October 12, the leaders of Ukraine and the EU met for a summit in Kyiv. The main accomplishment of the meeting is the Common Aviation Area Agreement signed after more than 15 years of negotiations. The agreement is to reshape the Ukrainian air transportation market.

Analysts are unanimous in their positive views of this years’ EU-Ukraine summit highlighting the Common Aviation Area Agreement, the EU’s investment commitment, and pledge to support Ukraine in standing against Russia on all fronts – in energy sector and in the affairs of Crimea and Donbas.

Accomplishments do not end there. The final joint statement from the summit covers all cooperation areas between Ukraine and the EU. Here are the main achievements of the meeting and setbacks to the progress, as seen by Ukrainian media.

The agreement foresees that the European and Ukrainian air carriers will be able to operate an unlimited number of direct flights between any airport in Ukraine and the EU. Ukraine will bring its aviation safety standards in line with the EU’s. The agreement is to be ratified by all EU member states. It will come in force even before the ratification process is completed, the Ministry of Infrastructure of Ukraine said.

Ukrainian carriers fear they will stand to lose from the agreement, as EU carriers will fly domestic routes in Ukraine, while Ukrainian airlines will only be able to operate flights between the EU member states if they also serve a point in Ukraine.

Energy and security: Russian gas and Russian aggression. The European Union continues to stand by Ukraine, the final statement reads mirroring what the EU leaders said at the summit.

Brussels is to develop mechanisms to uphold energy security of Ukraine. The EU may increase reverse gas flows and jointly use Ukrainian gas storage facilities, the President of the European Commission said.

The final statement reads: “In the context of the existing and future gas transmission systems on the territory of the EU and Ukraine, we reiterated our mutual commitment to full implementation of the applicable EU legislation and the Association Agreement obligations. We also agreed to make best use of each other’s existing energy networks and capacities, and to consult and co-ordinate, as appropriate, on infrastructure developments, which may affect interests of both Parties. We underlined the need to fully apply the EU energy and competition legislation. The EU and Ukraine stressed the importance of working together against any potential efforts by third parties to use energy as a weapon, in particular as regards the effects on the sustainability of gas transit through Ukraine.”

In the statement, there is a passage on Crimea: “We remain deeply concerned about the presence of Russian military equipment and personnel in the non-government-controlled areas of Ukraine and unprecedented large-scale military build-up close to its border with Ukraine and in the illegally annexed Ukrainian Autonomous Republic of Crimea and the City of Sevastopol. We strongly urge Russia to meet its commitments under the Vienna Document, and to provide more transparency and to credibly explain the deployment of military forces and equipment in these areas.”

The EU’s policy on Russia remains unchanged, and sanctions on Russia stay.

For many years, Kyiv has sought the EU’s recognition of its accession prospects. President Zelenskyi said it was discussed behind closed doors. Prospects of membership in the EU are seen from Ukraine as a “logical and anticipated step”, the President said at a news conference.

“What is at the end of this path? Is there any?” the President is quoted as saying. There was no direct answer to that question.

Ursula von der Leyen said the EU and Ukraine “share the same destiny as one European family”. Arguments brought forward by the Ukrainian President were strong and solid, said the President of the European Council Charles Michel. They will intensify the discussion in the EU, he added. That is not what Ukraine hoped for.

Prospects of EUR six billion investment. The EU will mobilize EUR 6.47 in public and private investment for Ukraine. Further details were not revealed.

The final statement underscores swift implementation of the plan.

That does not mean that the EU will disburse the entire amount. The investment plan includes grants, loans, and bank guarantees that will help attract investments that are ten times the size of the initial funds. Similar plans were drafted for other Eastern Partnership states. The amount of loans, guarantees, and grants was not revealed. “We have included all Eastern Partnership states in the investment plan announced in June. Different parts of the plan are destined for different states,” an EU official said.

Prospects of removing barriers to Ukraine’s industrial products. Kyiv and Brussels work to update import duties on Ukrainian products under the EU-Ukraine Association Agreement. Ukraine hopes of more opportunities in the EU market.

The Agreement on Conformity Assessment and Acceptance of Industrial Products is to be signed at the next year’s EU-Ukraine summit, Zelenskyi said.

Seen as a breakthrough deal, it simplifies the access to the EU market not only for Ukrainian raw materials, but also for value-added products.