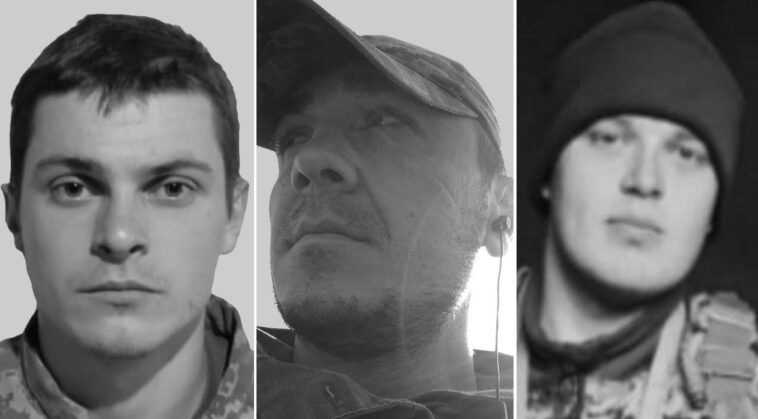 Despite attempts to declare a new (i.e. renew the old) truce, the war in Donbas continued. In December, the Joint Forces Operation headquarters reported 128 shellings, including 38 in violation of the Minsk agreements.

The first two defended their native Donbas. They were born in the Donetsk and Luhansk regions. The third is a paratrooper from the neighboring Dnipro region.

All three lives were cut short by bullets from Russian snipers, who have recently been causing bloodshed on the line of contact…

Herovkin, a serviceman of the 93rd Independent Kholodnyi Yar Mechanized Brigade, was killed by a Russian sniper’s bullet in the Novotroitskyi district of the Donetsk region, defending Ukraine and his small motherland.

Valerii Yevhenovych Herovkin, or “Hera”, was born in Kramatorsk on July 21, 1999. He studied here at school №5, graduated from Kramatorsk Technological College trained as an electrician.

The boy was brought up in the family of a Protestant priest, pastor of the Church of Christ the Savior Yevhen Herovkin. According to one of his father’s colleagues in Kramatorsk, the boy was very intelligent and took part in various church events.

The guy made a decision to go to the front to defend Ukraine on his own.

He joined the Armed Forces in September 2020. He fought as an antitank grenadier in the 93rd Mechanized Brigade.

“My father explained to Valerii that living in our reality is also a risk, anything can happen. But at the front, the risk is much higher. He told his father that he understood perfectly well that he could be wounded or even killed. He consciously went to serve,” the pastor said in a comment to Obozrevatel.

Colleagues talk about Valerii as a positive guy who was always ready to help.

Hera regularly played sports, even trained at the front.

Valerii had a girlfriend Oleksandra, whom he met at a church meeting.

On December 1, the Ukrainian soldier was shot in the head by a Russian sniper at an observation post near Novotroitsk.

The 74th Reconnaissance Battalion is “sectoral”, i.e. it performs combat missions along the entire length of the front line of one of the directions (Donetsk). 30-year-old Stanislav Zaporozhets was from the Luhansk region. He was born in Lysychansk.

The senior soldier has been in the Armed Forces of Ukraine since 2019. Served in the 74 Independent Reconnaissance Battalion. He had the call signs “Rumun” (“Romanian”) and “Zep”.

“Stanislav will be remembered forever as the soul of the company. He personally took great care of uniting the military team, had a clear sense of humor,” said Zaporozhets’s fellow, Dmytro.

Zep died on December 16 near the village of Pavlopol, Volnovakha district, from a fatal bullet wound inflicted by a Russian sniper.

“…He died instantly. At the same time, he was in a bulletproof vest and helmet. No violations were committed by him. It was in the evening, in the dark of night,” said member of the unit Eduard.

His mother and younger brother remained behind.

The hero was buried on December 20 in the city of Novodruzhesk, Luhansk region.

The last Ukrainian soldier died in 2021 from an enemy bullet in the Avdiivka area on the evening of December 31, when the country was about to celebrate New Year’s Eve.

It was junior sergeant Stanislav Bohuslavskyi from the 25th Airborne Brigade of the Armed Forces.

“This is a heavy loss for each of us… Junior Sergeant Bohuslavskyi S.A. was a sincere, open man, always ready to lend a helping hand to his fellows, among whom he enjoyed respect and authority. But the enemy with its insidious actions ended the life of a paratrooper, a patriot, a true son of his people…

Eternal memory to the hero… We will not forgive!!!”, the 25 Airborne Brigade said, expressing deep condolences to the family and friends of the defender of Ukraine.

“Stas was my soldier, I used to be his sergeant. Then he was promoted and became a sergeant. I taught him from the beginning. He came here in 2018, started his military career not far from here, in Kamianets – it is a few kilometers away. And from the soldier, he made it to the section chief. He already passed on his combat experience to others and had several rotations behind him. They wanted to promote him to the chief sergeant of the platoon…”, says his colleague Olexandr.

“He was a soldier who had already become a warrior. He was truly an example to all – such a strong, sturdy chap. Reliable, could always lend a hand in a difficult moment. We really lack people like him… Who can go side by side with you under any circumstances,” adds Ivan, another comrade-in-arms.

It is known from the deceased’s Facebook that Stas Bohuslavskyi lived in the city of Novomoskovsk in the Dnipropetrovsk region.