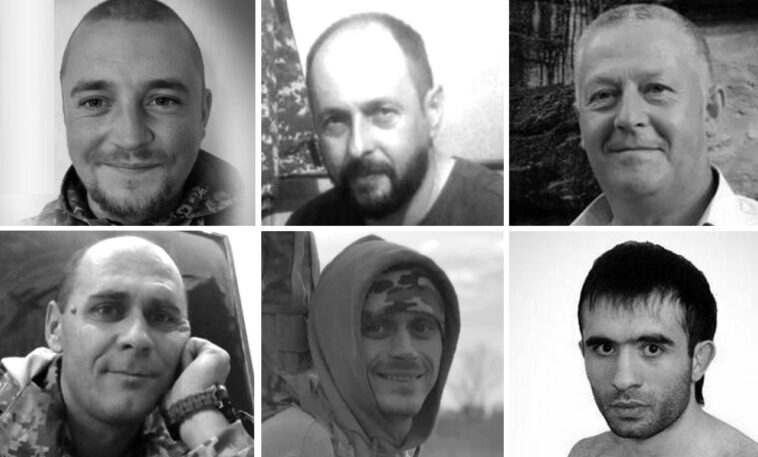 The autumn of 2021 was the last for the six soldiers who laid down their lives for Ukraine in November.

Two servicemen were from the 79th airborne assault, one each – from the 128th Mountain Assault, 24th and 54th Mechanized Brigades, and the 8th Special Regiment.

Two defenders died in the Donetsk region, four – in the Luhansk region.

Lieutenant colonel and master sergeant, two more sergeants, and two soldiers. Ukrainians, ethnic Russians, Tatars, and Azerbaijanis… Not boys, but mature men. From 29 to 51 years old. Each of them chose the path of a warrior, followed it till the last breath and died for Ukraine to live and win.

Their sacrifices are a reminder to each of us that the war is ongoing. In November, the Russian occupiers fired 222 shooting attacks at the positions of the Armed Forces of Ukraine, 78 of them with weapons banned by Minsk. In addition to the six fallen soldiers, 19 more fighters were injured.

Serhii received the call sign “Liutyi” not for his temper (Liutyi has another meaning – fierce) – everyone who knew him spoke of the 31-year-old soldier as a very kind and sensitive man, though ruthless to enemies. February is the month when he and his wife had their firstborn son five years ago. Happy father took the call sign in honor of his beloved son.

Serhii Yelisieiev was born on January 17, 1990 in Dnipro.

Childhood friends mention only good about him: he loved to play the guitar, did not fight with anyone, helped the elders. At the same time he had a virile character and, if necessary, could stand up for himself and protect the weak.

“As a child, Serhii was an incredibly kind and obedient boy. That’s how he grew up. He loved his wife very much,” says his grandmother.

Yelisieiev was at war since 2015. At first, he served in the 93rd Separate Mechanized Brigade.

“He acted boldly, unconventionally, decisively and defiantly, although he was always mindful of caution,” a dueling comrade recalls, “The first time I saw Serhii on a combat post he was smiling, in good humor. We became friends pretty quickly. He proved to be a responsible, reliable and very competent commander.”

In 2019, Yelisieiev resigned from the Armed Forces but soon signed the contract again. This time he joined the 128th Separate Mountain Assault Brigade. Sergeant, commander of a combat vehicle – commander of a division.

Serhii died on November 2 near Pavlopol in the Donetsk region.

“While on a battle mission, he watched the enemy on duty at night. And as it happens, the enemy somehow crept close… and a sniper bullet took the life of our comrade,” said Volodymyr Zelenkov, a representative of the 128th Mountain Assault Brigade.

The soldier was buried in Dnipro on the Alley of Heroes of the Krasnopil Cemetery.

He is survived by his wife, five-year-old son, parents, grandmother and great-grandmother, who survived Holodomor and World War II.

Vitalii Pavlysko died three weeks shy of his 48th birthday. He was born on November 29, 1973, in Yavoriv, Lviv region. He received vocational secondary education, served in the police.

He was defending the state since 2014. Chief sergeant of the 7th Mechanized Company of the 3rd Mechanized Battalion at the 24th Separate Mechanized Brigade named after King Danylo of the Armed Forces of Ukraine.

According to colleagues, Vitalii was engaged in blasting operations and demining of various objects, of which he had great natural ability.

The comrades and commanders of the unit where Chief Sergeant Pavlysko served from the very beginning of the Russian-Ukrainian war remember him as a very brave, decent, responsible, hard-working and experienced serviceman, a good warrior and a reputable soldier who always showed reasonable initiative and had the back of his commanders, subordinates and comrades.

“Vitalii was the salt of the earth. There are few of such people,” said Lieutenant Colonel Viktor Kudriashov, who served with Pavlysko from the very beginning until the end of 2020.

Vitalii received the pseudonym “Hunter” for his great passion for hunting.

“He loved to hunt. A real menace of hares and pheasants. He had his rifle here, which he often took with him when hunting. He even liked to just walk around with his handgun in nature. There are thousands of hares and pheasants here now. It is a pity that he never got a chance to catch a boar. He already got on the track but missed this chance,” comrade under the pseudonym “Deerslayer” said.

Vitaly served more than one rotation on the front line. And when he last came home, his mother begged him to stay – as if she felt she would never see her son again.

“But he stayed here for a while and went back, as usual. He’d say his comrades are there, he needed to watch over them, warn them. He was for the people, for someone’s children,” Sofia wipes away tears.

But Vitalii was not destined to see the victory come true. On November 7, at about 2 p.m., the Russian occupiers fired at the positions of the Armed Forces near Novozvanivka in the Luhansk region with weapons prohibited by Minsk. Vitalii Pavlysko died on the spot from injuries received as a result of a 120 mm mine rupture.

The soldier was buried in the New Cemetery in the town of Yavoriv.

He is survived by his parents, wife, daughter and son.

On November 12, two experienced soldiers of the 79th Separate Assault Brigade were killed by an explosion in the JFO area in the Luhansk region.

Master Sergeant Vadym Fedosieiev was born on October 1, 1970, in the village of Burylove of the Kryve Ozero district, Mykolaiv region. He devoted almost his entire life to the army. At the age of 14, he already played in a military orchestra – a military unit was located near his native village. He was the head of the unit.

“I met him in 1993, when we started serving together. He was a good friend, very ardent, scrutinous about his responsibilities. Vadym became a commander of a repair platoon where parachutes are repaired. In fact, he was responsible for people’s lives, for the way a parachute would work in the sky,” said Oleh, the soldier’s friend.

Old comrades said that when Vadym Fedosieiev served in the UN peacekeeping mission in Yugoslavia, he was taken prisoner by Serbs, where he was tortured. He himself did not like to recall it.

In 2009, he retired from the military but stayed to work in his dear unit. After the beginning of the Russian aggression in the east, in March 2014, the man was mobilized. He went to war without hesitation – not for nothing did he choose the profession of the defender of the Fatherland.

Until recently, his position in the 79th Brigade was the head of the repair shop of the parachute and supply-dropping equipment and military uniforms and gear at the maintenance section of the landing company.

On November 12, 2021, a car carrying 79 sergeants, Vadym Fedosieiev (behind the wheel) and Lt. Col. Ruslan Prusov ran into a mine near the village of Nyzhnoteple in the Luhansk region while on a combat mission. Given how the car broke, the servicemen had no chance of survival.

The paratroopers were buried in the Honorary Sector of the Myshkovske Cemetery in their native Mykolaiv.

The master sergeant is survived by his wife and adult son.

Ruslan Prusov, a 44-year-old lieutenant colonel and chief of the 79th Separate Air Assault Brigade, also gave most of his life to the army.

He was born on January 2, 1977, in Bolhrad, Odesa region. There he graduated from school, was called up to the Armed Forces. He did compulsory military service in his small motherland.

A son of a Ukrainian and a Tatar, Ruslan dreamed of becoming an officer. And he made his dream come true. He mastered military science at the Odesa Institute of Land Forces (now the Military Academy), as well as at the National Defence University of Ukraine named after Ivan Cherniakhovskyi.

But being an officer is not just about education. Ruslan Khalilovych’s innate leadership qualities are noted by all who happened to serve with him or under his command. “If Khalilovich is around – we feel more confident,” – former subordinates admit.

Mentions of the paratrooper officer (then still a major) Ruslan Prusov can be found in the memoirs about the battles for Donetsk airport in the winter of 2015, recorded by journalist Serhii Loiko.

Ruslan Prusov was killed along with Vadym Fedosieiev on November 12 while performing a combat mission as a result of a car detonation with an enemy unknown explosive device near the village of Nyzhnoteple in the Luhansk region.

Ruslan Khalilovych Prusov was buried in the Honorary Sector of the Myshkovske Cemetery in Mykolaiv.

He is survived by his wife and young daughter, as well as a daughter from the previous marriage.

Ubert Mrachkovskyi, a senior soldier and sniper in the 8th Special Purpose Regiment, was born on July 12, 1988. He lived in Khmelnytskyi.

The boy’s mother died early, so his aunt raised him.

“I sent him to the army, saw him take the oath. When he started contract service, I came to Lviv, he served as a paratrooper. And then he decided to move to Khmelnytskyi, to transfer to the 8th Regiment. So he retrained as a sniper. He was in Mariupol, Donetsk, Luhansk,” the woman said.

When the Russian aggression in the east began, Ubert went off to war as a volunteer. He took part in the battles for Savur-Mohyla as a member of the 51st Separate Mechanized Brigade, was wounded.

Having returned to service after the treatment (this time – in the 128th Airborne Assault Brigade), he took part in the battles for Debaltseve.

“He was a positive person. He never lost his sense of humor. He was always with a rifle, cheered others up, boosted morale. He knew what he was doing, he was obsessed with his service,” says Artem Komisarchuk, also a member of the 51 Mechanized Brigade, about his comrade.

Ubert was killed on November 19 near Prychepylivka in the Luhansk region: a bullet hit him in the head.

The soldier was buried in Khmelnytskyi.

His aunt, wife and two children remain behind.

Ali Naib Alkhasli was born on January 22, 1992, in the capital of Azerbaijan – Baku. He came to Ukraine a few years ago – to Kharkiv, where pankration is actively developing. Ali Alkhasli not only admired this ancient Olympic martial art like many other martial arts but practiced it professionally. In the ring, he performed in shorts with the inscription saying “Warrior” in Ukrainian. He later received such a call sign in the army.

He found a wife in Kharkiv, dreamed of creating a pankration section and training young people. But in 2018, unexpectedly for friends and relatives, he signed a contract for service in the Armed Forces of Ukraine and went to the front.

Senior soldier, senior operator of the 2nd anti-tank division of the anti-tank platoon at the fire support company of the motorized infantry battalion, the 54th Separate Mechanized Brigade named after Hetman Ivan Mazepa.

Everyone who served with Ali or knew him closely in civilian life, speaks of the Azerbaijani soldier of the Armed Forces as a very kind, open and sincere man.

On November 26, at about 4 p.m., Ali was on combat duty near Novomykhailivka in the Marinka district, Donetsk region, when he was shot by an enemy sniper.

Ali Naib Alkhasli was buried according to the Muslim custom on the Walk of Fame in Kharkiv.

He is survived by his mother and younger brother in Azerbaijan and his wife in Kharkiv.