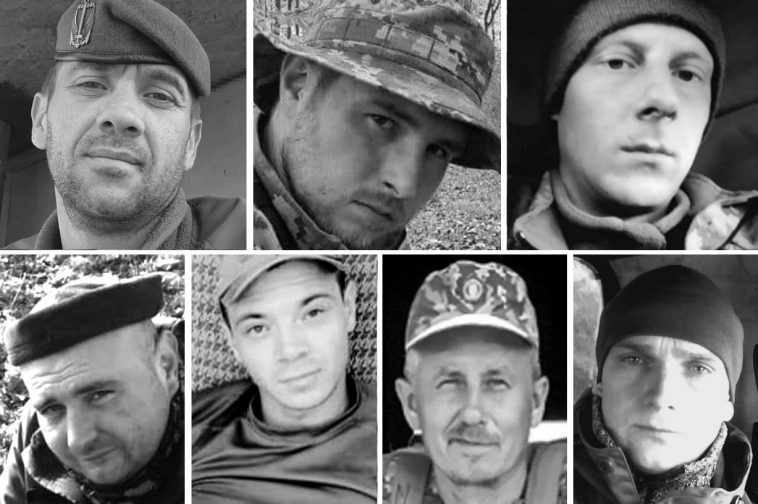 This is a summary of Novynarnia‘s article.

The intensity of hostilities on the Eastern Front has increased. The official number of shelling occasions in September was 222, which is 40 more than in the previous month. 34 Ukrainian soldiers were wounded and seven were killed.

They were born in different parts of Ukraine: from Stryj to Kharkiv oblast. They were Ukrainians and ethnic Russians. The youngest was 24 and the oldest one — 49.

Last fall, they gave their lives for Ukraine, protecting our peace.

The war continues. We remember all those who do not let it go beyond their trenches. Eternal memory to our defenders.

Oleksiy Kulenko was born and spent his childhood in the village of Orlove, Holivanivskyi raion, Kirovohrad oblast. After finishing school, he worked as a tractor driver and machine operator.

His comrades describe him as a brave man, a good friend, and a responsible soldier.

Senior soldier Kulenko planned to take a vacation in October and propose to his girlfriend. Instead, on September 11 he received a shrapnel wound incompatible with life during the occupier’s mortar attack of the Armed Forces’ position near Prychepylivka in the Luhansk oblast.

The soldier was buried in Orlove. His brother and three daughters remain behind.

Denys Herman, a soldier, and intelligence officer of the 74th Separate Reconnaissance Battalion, was born in Zaporizhzhia in 1989.

From 2006 to 2010 he was studying at the university, being an active and responsible student, and finally got a Master’s degree. After that, he participated in Maidan, mostly in Zaporizhzhia. In 2019, Herman signed a contract with the Armed Forces and got to the front in January 2020.

“During his service, he proved himself an honest and conscientious fighter. This year he underwent professional training and received his military specialty. Denis was very special because of his kindness — he loved his mother, sister, and father. Also, he loved animals of all kinds. There were always some kittens and dogs surrounding him. And that is why he had a callsign “Hedgehog”, — tells Eduard Korovnyk, a  deputy commander of the 74th Intelligence Battalion Eduard Korovnik.

Denys died on September 11 in the Donetsk oblast due to the fatal shrapnel wounds received during the artillery shelling of the Armed Forces’ positions by Russian troops.

He was buried in Zaporizhzhia.

He was survived by his parents and sister.

27-year-old Artur Holub started protecting his country in 2020, having just graduated from the university.

He was born in 1994 in Malyn, Korosten raion, Zhytomyr oblast. During his studies, he worked as a truck driver. Therefore, after joining the Armed Forces, he willingly got behind the wheel of a military car.

Artur was a sailor and a driver in the 503rd Separate Marine Battalion.

His friends, colleagues, and superiors remember Artur as an extremely kind, cheerful and lucid man who was impossible not to like.

His comrade, Mykola Stavytskyi tells that when they were standing near Horlivka, Arthur could drive his truck in places where other drivers simply refused to do so. “He was very diligent and responsible. His car was always in perfect technical condition, being one of the best in the battalion… He was an honest guy, very fair and fearless, like an adult child”, says Mykola.

Arthur had a beloved 8-year-old son Dmytro and was very proud of him.

He also took great care of his sick mother. To raise money for her operation, Arthur worked at night as a loader in warehouses while studying in Mariupol between rotations.

In the spring of 2021, he earned a Marine’s beret. Also, he dreamed of becoming a paratrooper. In summer, he wrote to his comrade Mykola that he jumped with a parachute for the first time in his life and was incredibly happy to see the sky so close. That was their last correspondence.

On September 12, Russian-occupation forces shelled Ukrainian Armed Forces’ positions in Donetsk oblast from anti-tank missiles. One of the rockets hit Arthur’s truck. He literally burned in the cab…

Artur was buried in his hometown Malyn. His mother, younger brother, and son remain behind.

The name of 34-year-old Valentyn Chepurnyi was not included in the official reports of the Armed Forces headquarters on combat losses. After all, on the day of his death at a position near Krymske in Luhansk oblast, he was officially considered a civilian already since his contract had expired just the day before. Valentyn just stopped by to pick up his documents and say goodbye.

In 2015, he started serving in the ATO / OOS zone. Previously, Valentyn served in the company specialized on radiation, biological, chemical protection, and during training in Shyroki Lany decided to transfer to the 17th Kirovohrad Motorized Infantry Battalion of the 57th Separate Motorized Infantry Brigade named after Kish Otaman Kost Hordienko. He served until he injured his leg during the exercises. This happened shortly before the end of his contract.

Sergeant Chepurnyi was sent to hospital for treatment. His contract expired on September 10. According to the deputy commander for moral and psychological support of the 57th SMIB, the soldier was offered to send all documents by mail. However, Valentyn decided to deliver them in person. Having arrived at the rear control post, which was far from the “line of fire”, he called on his comrades. He bought some cookies, tea, and coffee to treat them with. The brothers slipped through, suffering simple injuries. And then the shelling started, and Valentyn got a shrapnel injury from a 120-caliber mine which was incompatible with life.

Valentyn Chepurny was buried in his native village of Vysokopillya in the Kherson oblast.

He was survived by his mother and son.

24-year-old Demyan was born in 1997 in the village of Rudnyky, Stryj raion, Lviv oblast. Being the youngest son in a large family, he had three brothers and two sisters. Their mother raised them all on her own.

Demyan was cheerful, sincere, and decent. In 2014, when the war started, he graduated from high school. After finishing school, he was called up for military service. Later, in August 2016, he signed a contract with the Armed Forces. And when his term expired, he signed another one.

He was a Senior soldier, commander of a combat vehicle, commander of the mechanized division of the 17th SMIB in the 57th Brigade.

At the same time, the soldier was studying at the university, majoring in “History and Law.”

Demyan was enthusiastic about classes, as academic discussions with teachers. Although he was serving in the East, he continued to study remotely. He got in touch with the teachers and successfully passed his exams.

In October, he had to return home to his relatives, who were looking forward to seeing him at last.

But on September 13 the occupiers once again fired at the positions of the 17th Battalion near Prychepylivka with various types of weapons, including small arms. Demyan was hit in the head by an enemy bullet which gave him no chance of survival.

Danyliv, a senior soldier, was buried in his native village Rudnyky.

Viktor Molostov, an ethnic Russian, was born in 1971 and spent his childhood in the Vologda oblast. In 1987 he moved with his parents to Ukraine, to the village of Novooleksandrivka, Krasnohrad raion, Kharkiv oblast.

Viktor is remembered as a very sensitive, reliable, and kind man. Also, he was a great family man, good husband and father.

It is said that one of Molostov’s sons also served in Donbas.

Viktor was mobilized in 2015 so he didn’t hesitate to give up his civilian job and went to the war.

He served in various brigades on the front line. After demobilization, he returned home, but less than two years later signed a contract with the Armed Forces. He was serving in the Separate Mechanized Brigade named after Ivan Mazepa. Viktor was a senior soldier and a commander of a combat vehicle.

“Viktor was a role model for other fighters. He had more experience: both in life and in the army. He always performed all the tasks and never refused or said he could not do something. Also, he gave advice to other servicemen,” — tell his comrades. He had great career prospects. However, on September 26, while performing a combat mission in Donetsk raion, he died due to the enemy explosive device. Unfortunately, there was no chance of survival.

Viktor was buried in Novooleksandrivka.

His wife and two children remain behind.

Oleksiy Stryzhak was born in Zelenodolsk, Dnipropetrovsk Oblast, in 1982. He worked as an electrician at DTEK and Kryvyi Rih thermal power plant. In 2015, he went to war.

Since 2017, he had been a combat medic in the 25th Separate Airborne Sicheslav Brigade.

Junior Sergeant Stryzhak is remembered as a sincere, open-hearted person, who was always ready to help his comrades. He had respect and credibility.

Oleksiy died on September 30, having received a fatal shrapnel wound while the enemy was shelling Armed Forces’ positions near the village of Kamyanka in Donetsk raion. According to the press center of the Joint Forces Command, the occupiers fired 122 mm caliber artillery.