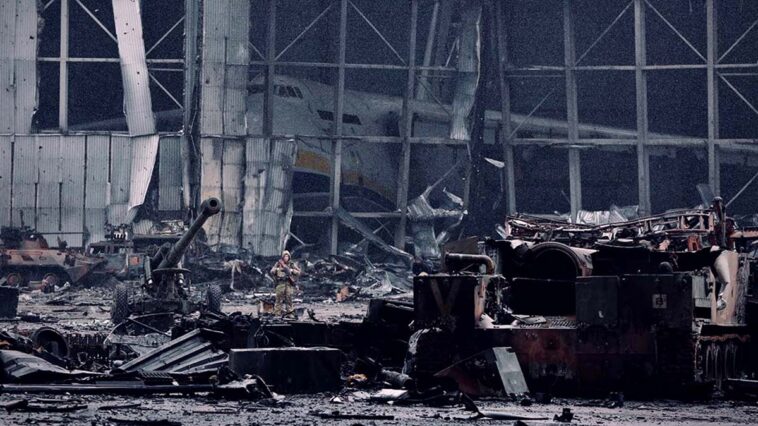 The Hostomel airport was strategically important in the planned by Russia assault on the Ukrainian capital. The Ukrainian forces couldn’t let such a takeover happen.

Hostomel – a town of 17 thousand inhabitants off to the north-west of Kyiv, was one of the first places to be on the forefront of the Russian assault due to its close proximity to the capital as well as its airport. The runway of the Antonov (Hostomel) airport lured the Russians in like a magnet. For a few days, they tried to take control of the runway: they deployed paratroopers, arrived in armoured vehicles, while taking high casualties, yet pushed again and again. This was more than stubbornness: the Hostomel airport was strategically important in their planned assault on the Ukrainian capital. The Ukrainian forces couldn’t let such a takeover happen.

‘In the first days, our guys acted cunningly and tactically smart’, recalls a local inhabitant by the name of Yuriy, who returned to Hostomel after it was liberated. ‘At a certain point, they stopped shooting at the Russians and gave them a possibility to enter the airfield. Their column rolled for two to three hours: some of it to Bucha, some of it onto the airfield – and that’s where our guys covered them with shells’. Soon after, it became known that Russia lost a lot of its elite paratroopers in Hostomel.

For the duration that mobile coverage was present in Hostomel, Yuriy frequently called his father, who lives near the airfield, and thus knew about everything that was happening there. After luring the invaders onto the airfield and thus giving them a false sense of comfort, Ukrainian forces covered them with intense fire from all sorts of weapons, according to Yuriy. During those intense moments, the area of the airfield and its surroundings turned into a living hell from which there was no viable escape for the Russians.

Surprisingly, this scenario repeated itself at least three times. The Russians were not stopped by high casualties, nor the repetition of the same mistake over and over again. This could be considered as a short ‘prologue’ to the events in Chornobayivka, a village north of Kherson where a military airfield is situated. The Russians tried to deploy paratroopers there more than ten times, without success. After more attempts in Hostomel, Russian aircraft hit a high-rise residential block near the Antonov airport, thinking that was the source of coordination of Ukrainian shelling of the airfield. As a result of the events in Hostomel, the Russians suffered high casualties and only ended up having a completely destroyed airfield, unuseable for its main purpose. The invaders took their anger out on ‘Mriya’ (meaning ‘dream’ in Ukrainian) – the largest aircraft in the world, which was not taken out of Hostomel to a safe place in time.

READ ALSO: The Beast from the Void. Putin’s fascism: How it came about and what it wants

‘I waited until the last moment, expecting that the local government would initiate some sort of evacuation for those who would be endangered by the occupation’ says Yuriy. ‘I understood that no one was ready for this sequence of events – local officials in particular, but I didn’t even see an attempt to explain to the local communities what they must do in such an emergency’. Today we know that the helplessness and lack of responsibilities of officials have cost many Ukrainians their lives. Even though in the first few days, one would experience shock, later – the consequences turned out to be even more horrifying. Even during the first days of the invasion, no one could imagine the frightening events which would unfold in neighbouring Bucha, Irpin, Borodyanka and other towns in the Kyiv region.

Without getting called up for evacuation (as there was no evacuation organised), Yuriy and his family decided to act upon his own intuition. After a certain point, the risk posed by staying in Hostomel skyrocketed. When armoured columns entered the town alongside infantry units, things were tolerable for the time being. However, when Yuriy noticed snipers positioned on rooftops and Chechens going into people’s private yards, he understood that it was time to leave.

‘I served in Chechnya before the collapse of the Soviet Union’ said Yuriy. ‘I recognised their language immediately. My regiment took part in the Chechen War, and many of my fellow servicemen as well’. Yuriy is certain that on the basis of the two Chechen wars, Putin built his modern army. The servicemen of the Chechen Wars trained new recruits, later occupied higher positions in the army themselves, and to this day are directly involved in the war against Ukraine.

The moment for leaving was chosen by Yuriy immediately after there was a brief pause in the fighting and Hostomel fell silent. ‘Our guys hit the orcs (such a label has been given to Russian troops by many Ukrainians), the orcs fell silent and I understood that staying in Hostomel was not a good option, otherwise, we would be in trouble. Family was ready to depart, their belongings packed and inside the car. The children were laid down on the floor of the car between the back and front seats, covered with various things for protection as well as a metal sheet of cover on top. The car doors were then covered with homemade ‘bulletproof’ material. Yuriy then hopped into his car and covered his knees with a manhole cover as a protective shield and then hit the gas. They drove by a Russian checkpoint with lightning speed, fortunately, there was nobody there. At the next checkpoint, the Russians surprisingly did not react to the car at all, as Yuriy and his family drove past them. Perhaps they didn’t even have the time to react. The danger could also come from a Ukrainian checkpoint, which could initiate fire upon mistaking civilians for saboteurs. Without breaking, Yuriy started to wave in the direction of the checkpoint and the soldiers there understood that he was one of their own. The soldiers thus gave them a sign to continue without stopping. Yuriy continued to drive at a very high speed in the direction of Kyiv, until finally realising that he is safe and that no one will shoot him in the back. Only after this, did he stop next to a group of Ukrainian soldiers which were stationed by the road, shut the engine off and took a breather.

Yuriy says that he was simply lucky. He sensed the right moment to escape and took the right decision to use it and luckily, his car was not shot at. As it turned out, the brief silence that Yuriy used for his escape only lasted a few minutes and was the last of its kind for days to come. Afterwards, shelling and the briefly interrupted exchange of fire resumed and none of Yuriy’s friends and neighbours could make it out using the same method of escape. Instead, people had to stay home and live through the terror in their basements. They were relatively lucky too however, as they also kept their lives.