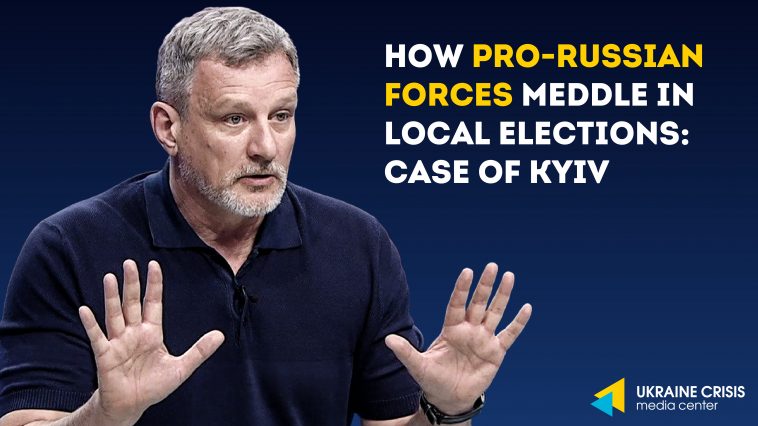 As Kyiv mayor elections, scheduled for autumn 2020, are fast approaching, key political forces in Ukraine step up their game. Leading position at capital State Administration is traditionally desirable for political and administrative influence it entails, so the competition is fierce – and not devoid of manipulations, including the use of online trolls and bots, which have become a crucial element in political meddling, be it foreign or domestic. Kyiv deserves special attention not only for its position as a capital, but also because potential fraud taking place here evidences a broader trend. Local elections in the regions, which are also planned for autumn 2020 and have already become a subject of numerous political conflicts, are likely to use a similar tool-kit – which, as it becomes increasingly obvious, is actively applied by pro-Russian forces to promote their candidates.

A specific case caught our attention when we noticed the suspicious online behavior among the supporters, which are highly likely to be inauthentic accounts, of one particular candidate in Kyiv – Andrii Palchevsky.

Andrii Palchevsky is mostly known as a businessman, who had projects both in Ukraine and Russia, but his ties with Moscow are arguably stronger than those with Kyiv, where he was born. Having graduated from a former Military Institute of Foreign Languages in Moscow, directly linked to the Ministry of Defense, he was a career officer and is sometimes linked to GRU – accusations he has obviously denied. He continued his career in Russia and even attempted to get elected to State Duma. After this attempt failed, he moved back to Ukraine, only in the middle of 2000s, where his political ambitions gained more recognition.

Palchevsky became a Deputy Minister of Family, Youth and Sports under Prime-Minister Mykola Azarov. It is essential to remember that Azarov was one of the leading members of pro-Russian Party of Regions – the one behind former President Viktor Yanukovych, who was ousted as a result of Euromaidan in 2014 for systemic corruption, police brutality and pro-Russian policies. Both Yanukovych and Azarov unsurprisingly took refuge in Russia, whose position on Kremlin’s aggression against Ukraine they wholeheartedly support. Azarov has repeatedly facilitated Kremlin’s narratives on “civil war”, “fascist Ukraine”, “discrimination of Russian minority” and is a proponent of anti-Western rhetoric.

In presidential election of 2019, Palchevsky supported current President Volodymyr Zelensky. In fact, he expressed hope that Zelensky’s presidency will lead to a “reboot” of relations with Russia – and he did so on air of “60 Minutes”, one of top political programs in Russia that has been involved in a constant spread of disinformation regarding both Ukraine and the West.

Palchevsky’s role in former pro-Russian government might not have been indicative of his political preferences, but his sentiment is rather clear. Back in 2011, when he discovered himself as a TV-host, he publicly discussed the idea of Ukrainians and Russian being the same nation with Nikita Mikhalkov – Russian film-maker who has repeatedly made derogatory claims about Ukrainians. To be precise, Palchevsky said “Kyiv is a cradle of Russian civilization. Genetically, we are the same nation” and talked about the prospects of “reunion” between both states.

Now Palchevsky supports one of the key pro-Russian actors on Ukrainian landscape – Viktor Medvedchuk, endorsing his trips to Moscow, where he and other representatives of “Opposition Platform – For Life” party met Russian leadership and discussed gas issues at their own discretion. One of these trips is now being investigated by Prosecutor General’s office for possible state treason.

While Palchevsky does not take explicitly pro-Russian stand on Crimea and occupied territories in Eastern Ukraine, for it would likely damage his potential support, his position is ambiguous to say the least. In terms of Crimea he is a proponent of a populist approach that “Crimea will return to prosperous Ukraine”, while he does not deny a possibility of giving Donbas region to Russia, saying that “People must decide at a referendum whether to continue the war and keep Donbas for ourselves or to allow the leader to give it away”.

Despite formerly supporting Zelensky, Palchevsky became increasingly critical of Ukrainian government, particularly after COVID-19 outbreak. He was an active contributor to what can be evaluated as “Quarantine Maidan” operation – a spin of long-running campaign supported by Kremlin to encourage protests and undermine government to make it more susceptible to pressure from Moscow. Along with other activities aimed at polarizing Ukrainian society and promoting Kremlin’s narratives ranging from anti-Western rhetoric to false claims of Revolution of Dignity being a coup and Ukraine being a “fascist state”, this operation was supported by local media linked to Medvedchuk.

TV-channels ZIK, NewsOne and 112 provide Palchevsky with a significant amount of screen time. He is a regular guest at top political programs of all three channels, but the most active one is 112 – it has more than 30 publications on Palchevsky in June 2020. His announcements and publications are also widely circulated by Russian and pro-Russian online media, some of which, like Ukraina.ru and Politnavigator, were blocked by Ukrainian government for propaganda. Some of the news outlets recognized as “junk-websites” for their low professional standards and accusations of publishing political PR, such as Znaj.ua (related network of accounts was taken off Facebook in 2019) are also quite eager to share Palchevsky’s comments.

Palchevsky started to actively campaign for the position of Kyiv mayor in October 2019, almost a year before the election. To pump up the visibility of public support, manipulative sociology was involved, which remains one of the major tools of electoral influence. The Belgium-Ukraine Research Institute (BURI) published a survey, according to which Palchevsky got over 14%, making him a second most popular candidate after the current head of Kyiv City Administration Vitalii Klychko.

Numbers, however, are as questionable as BURI itself. It was called out by one of the well-established Ukrainian think-tanks “Democratic Initiatives” Foundation and its late director Iryna Bekeshkina, who was among the leading sociologists in Ukraine. There was a good reason to question the transparency of BURI’s efforts and its existence. The company portrayed as an independent and respectable European organization has no functioning web-site. Although as of today the place of domain register is concealed, it has been established before that BURI was registered from Moscow in 2018. Previously organization was also involved in presidential election campaign, claiming pro-Russian candidate Yurii Boiko would get 15% of the votes and come in third in the race. This number, which turned out to be considerably lower, was picked up by Russian and pro-Russian media in their coverage of Ukrainian elections and later used in accusations of elections being rigged.

In Palchevsky’s case, his prospects as a mayor according to BURI were first published on a web-site EUtoday, positioned as a European outlet to get more credibility with Ukrainian audience. Then they were promoted in a local media space – first of all, by the abovementioned Znaj.ua, and picked by more mainstream media and in social networks. Interestingly enough, this combination of seemingly European, unbiased and respectable resources did not stop with Boiko or Palchevsky. In February 2020 the very same EUtoday quoted BURI again, claiming there were growing approval numbers for Viktor Medvedchuk himself – which was unsurprisingly republished (2) by Medvedchuk’s media.

Manipulative sociology, access to Medvedchuk-linked media and substantial amount of old-fashioned billboards that started appearing back in autumn 2019, long before some of the parties have made decisions about their potential candidates for the position, do not constitute an exhaustive list. There is a high probability that bots are also involved.

A significant amount of Facebook profiles leaving comments in support for Palchevsky on news publications about mayor elections, including at one of the leading outlets Ukrainska Pravda,  have a small amount of friends (usually circa 30) and rarely post anything – in particular, have few photo uploads. Some of them, however, appear to be highly interested in Palchevsky personally. Google Image search for one of the presumed bot accounts generates images of Andrii Palchevsky himself, mostly from publications about him on 112 – because the person in question has been actively leaving comments under those.

Moreover, opening several of these links demonstrates that the company commenting in support of Palchevsky is largely the same – there is a similar set of the same ~10 accounts that post comments under relevant publications, and two profiles seem to consistently post after each other, sometimes engaging in a mutually supportive conversation:

NB: While there is no conclusive proof that these are not original Facebook accounts, such patterns are likely to indicate inauthentic coordinated behavior.

In addition to the generic complimentary comments, there are several main groups of messages promoted by presumed bot accounts in regard to Palchevsky’s candidacy as a mayor:

Putting Palchevsky against Klychko and denying his ties to Russian and pro-Russian actors may be spotted more frequently. First of all, Klychko currently enjoys the highest level of support among the possible candidates, so to raise the chances of any competitor it is important to first and foremost undermine the current leader of electoral race. This also makes room for a speculation that at least part of the bots involved does not support a designated candidate directly, but rather is focused on leaving negative comments about current Kyiv leadership, which are also a lot. This, however, does not mean that all the criticism is artificially generated: there are many issues in the capital which current administration is not dealing well with.

Second, as central regions in general have the second highest approval of joining EU and NATO after Western ones, it is safe to say that Kyiv is mostly in favor of European and Euroatlantic integration. Openly pro-Russian candidate does not have high chances of success in the city, and it is, therefore, important to disengage from such political links.

Use of bots and trolls in facilitating political support is not a new tactic. During 2019 presidential campaign, almost 30% of all content on elections in Ukraine were written by bots (one third of them operating from Russia), and, despite the denials, this tool was utilized by different candidates. There is no proof that if Andrii Palchevsky indeed relies on artificial online support in campaign for Kyiv, he is the only one to do so. Comments in his favor, however, appear to be the most aggressive and explicit – and behind it one might easily overlook his ties to Russia, which are of particular importance when it comes to a potential position of significant political power.