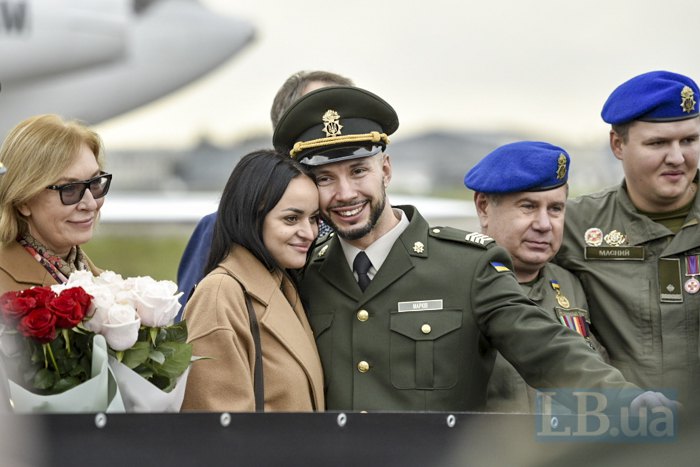 This week, Ukrainians awaited with bated breath the ruling of the Milan Court of Appeal that was considering the case of the Ukrainian National Guardsman Vitaliy Markiv. Markiv has dual Ukrainian-Italian citizenship. In July 2019, the court of first instance in Pavia, Italy convicted him of involvement in the murder of Italian photojournalist Andrea Rocchelli and his interpreter, Russian human rights defender Andrey Mironov. He was sentenced to 24 years in prison. On November 3, 2020, the Milan Court of Appeal acquitted Markiv. He was immediately released from custody, the next day he returned in Ukraine. We take a look back at Markiv’s case, highlighting why the justice restored is important for Ukraine.

Vitaliy Markiv (born in 1989) moved to Italy in 2003 with his mother and sister. He graduated from a technical college and acquired Italian citizenship. He worked as a DJ. Markiv returned in Ukraine in December 2013, during Euromaidan. He actively took part in the protest, and later enrolled in the National Guard of Ukraine, where he served in the General Kulchytskyi battalion. In spring and summer 2014, his unit was deployed near Sloviansk. Markiv’s participation in the combat actions became a pretext for his arrest in Italy: he was charged in the murder case of Italian photojournalist Rocchelli.

What was Markiv accused of? Why was he charged? Vitaliy Markiv was arrested upon his arrival in Bologna, on June 30, 2017. From then he was held in custody.

The indictment was based on the testimony of two key witnesses: French photographer William Roguelon, a survivor of the attack, and Italian freelance journalist Ilaria Morani, whose piece published in “Corriere della Sera” newspaper was seen as evidence of Markiv’s involvement. Still, credibility of their testimony was doubted on a variety of occasions. Thus, Roguelon changed his testimony several times, while Morani, when speaking in court, failed to prove that her conversation with Markiv (in which he allegedly “confessed”) quoted in her article, actually happened.

The prosecution claimed that on May 24, 2014, Vitaliy Markiv, a National Guard “commander” was involved in 30 mortar rounds fired upon the foot of the Karachun hill, where the journalists were staying. According to the prosecution, he passed the information on journalists’ location to the Ukrainian troops that allegedly fired upon them from mortars. In the attack, Andrea Rocchelli and his fixer Andrey Mironov were killed.

Markiv did not deny that on May 25, 2014, when the journalistic crew was killed, he was with his battalion on the hill Karachun. Markiv’s tablet, seized from him upon arrest, had dozens of photos made from the hill. The prosecution decided that some of the pictures recorded his permanent combat position.

From there, the investigators concluded, the site where the journalists came under attack was visible. Initially, Italian media reported that Markiv was charged over a mortar attack that he and his battalion made upon the ravine. Later, after the National Guard presented evidence that mortars were not in service with them at the time, the version of the events was amended.

The sentence of the first-instance court states that Markiv while watching a sector near the foot of the Karachun hill, saw unarmed reporters and fired upon them from the rifle, later, he directed the mortar fire by the Armed Forces of Ukraine.

The role of Russia’s propaganda in Markiv’s guilty verdict. Ukrainian journalist Olha Tokariuk, who has been covering the Markiv case since its onset and is a co-author of the “Crossfire” documentary about the case, is convinced that a number of facts point at the trace of Russia’s propaganda in Italy that contributed to the atmosphere around the case, in which the sentence was made.

Firstly, a lot of paragraphs in investigation documents seem to be copied from Russia’s propaganda materials. Thus, Markiv was called a “militant from an illegal group”, while the Ukrainian Army was presented as chaotic and incompetent. Ukraine was accused of the lack of will to cooperate over Rocchelli’s death case (in part, those accusations are true – Ukraine failed to hold a thorough investigation immediately in 2014-2015. It kept sending invitations to hold a joint investigation after Markiv’s arrest, but Italy ignored those invitations.) The prosecutors also referred to pieces from websites of Russia’s propaganda and those of Russia’s proxies (for example “Russkaya Vesna”) as evidence in court.

Besides, the coverage of the case by Italian media was often one-sided: they only covered the position of the prosecution. It shaped the public opinion seeing Ukrainians as dangerous radical right, and Markiv as a merciless murderer.

Russia’s propaganda had ground for these manipulations well-prepared, as its affirmations on “the civil war” in Donbas, “Nazi-led” Ukraine and “the coup” in Maidan were broadly distributed by Italian media since 2014. The distorted picture could have affected the jury’s decision.

Arguments of the defense. Markiv’s defense insisted that the charges are absurd and no real evidence is in place.

Besides, a surprisingly severe sentence issued by the court in 2019, saw Ukraine’s Minister of Interior Arsen Avakov actively engage in the case. The National Guard, where Markiv served, is part of the Ministry of Interior.

Markiv’s defense and Ukraine’s Ministry of Interior insisted that as of May 2014, the units of the National Guard were provided with light weapons only, and that was not possible for Vitaliy Markiv to “command” a mortar unit.

Following dozens of interrogations and examinations that Ukrainian investigators made, in August 2020, the Minister said that Ukraine’s law enforcement got evidence of Markiv’s innocence.

Interviews of the National Guardsmen who served together with Markiv, allowed to locate the precise position of the defendant. It was 1,760 meters away from the site where the journalistic crew was killed, meaning that precision fire from a Kalashnikov rifle that Markiv had at the time, was not possible from his position. Besides, the ravine could not be seen from the position.

Ukrainian policemen reported they found a guy, who possibly jumped into the ravine together with the journalists and the taxi driver. He is a local, he said that the first series of shots on May 24, 2014 were fired not from Karachun, but from the side of the “Zeus” factory controlled by the militants at the time.

Investigators analyzed the audio that Rocchelli made minutes before his death. They found that the shots were fired not from the 500-meter distance, where the Ukrainian troops were stationed, but from 200 to 300-meter distance to the “Zeus” factory.

Acquittal, release from custody, and return in Ukraine. The appeal was considered by the Milan Court of Appeal. Markiv was acquitted on November 3, he was back in Ukraine on November 4.

Upon his release, Markiv said that the day marks the paramount victory over the insidious propaganda “that not only aimed at compromising Ukraine’s integrity, dignity, and honor, but targeted the Ukrainian nation as a whole.”

“I cannot believe that. I was preparing myself for the worst scenario while hoping for the best. My sole wish and hope was for the Italian court to stay on the just side,” Markiv told “Radio Liberty” moments after release from custody.

He thanked all who supported him in jail, he also confessed that he is not angry at Italians, as not all of them agreed with the court’s decision.

Similarly, his attitude to journalists did not get worse, even though his case gained pace due to an article. “I purposefully avoid naming the person who wrote an article about me. But there were both Ukrainian and foreign journalists, who write the truth. They got curious: if he is ‘journalists’ ardent foe’, as he is presented, why are the facts in discordance with that?” Markiv proceeds.

Vitaliy Markiv added that he plans to continue military service and sees his future in Ukraine. “I promised myself to stay strong for the heroes who sacrificed their lives and those who are fighting for the independence,” he added.

He said, together with the lawyers he is considering a possibility of claiming compensation from those responsible for his three years in custody, those who “were trying to compromise” not just the National Guard, but entire Ukraine.