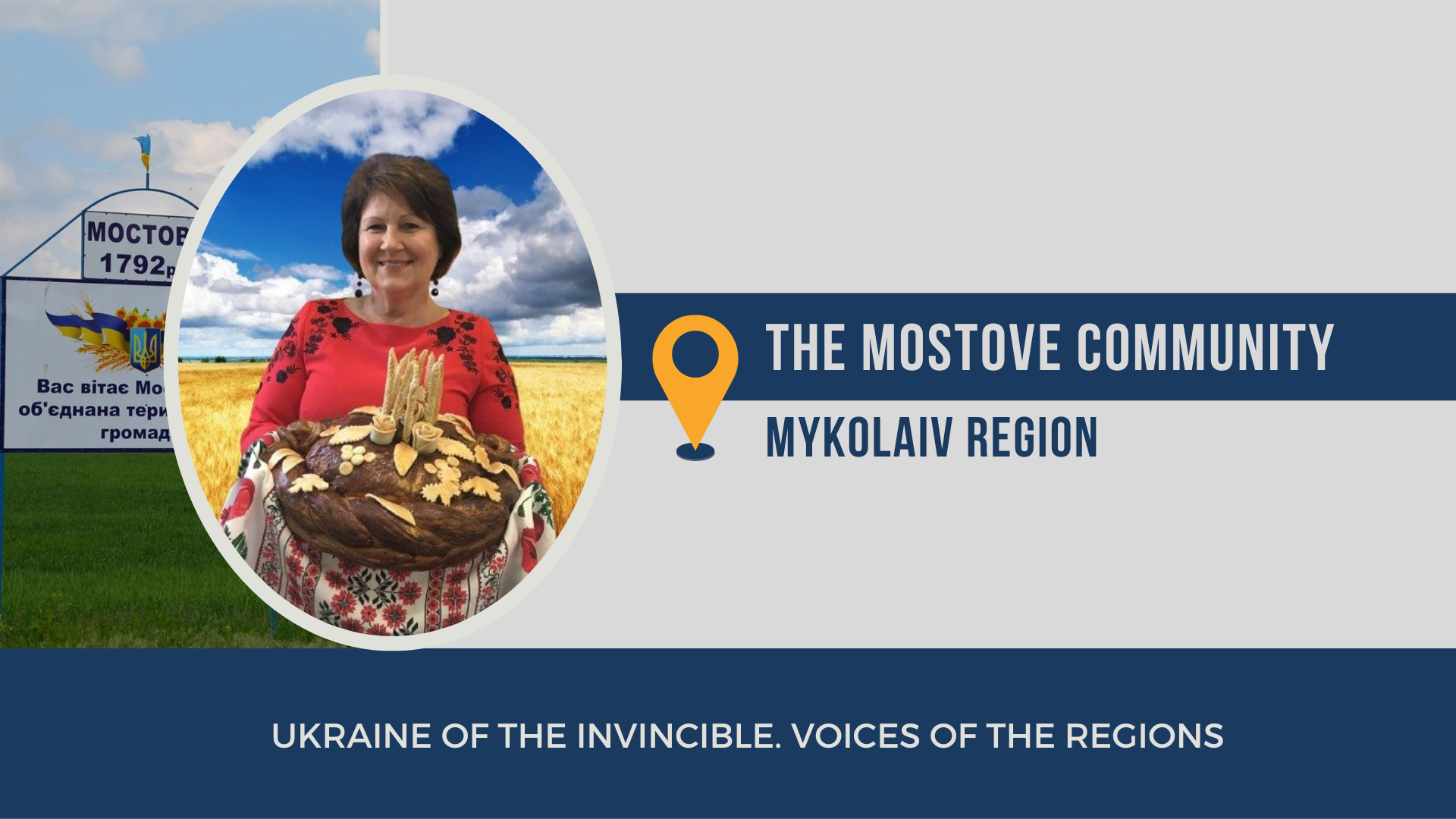 Mostove village community was among the first in the Mykolayiv region to take advantage of the local self-government reform opportunities. It happened in July 2016. Today, the community covers an area of 334 square kilometers, has a population of about 4,000 people and does not differ much from other communities in the Voznesensk district. It profits solely from agricultural production and makes its contribution to the resistance to Russian aggression.

The village of Mostove, Voznesensk district, Mykolayiv region, has a long history. It was founded by a Cossack Fedir Paskevych in 1792, and 20 years later, the owner changed – a nobleman of Hungarian origin, Lieutenant Yakiv Erdely, came to the village on the Chychykliya River. After that, life in Mostove started burgeoning: they opened a hospital, a school and a church, designed a park.

An amazing structure reminds of those times – a sort of miniature palace, which turned from the Erdely estate into a modern school. And these are not all the transformations that became possible after the amalgamated territorial community was formed.

“When the law on decentralization was passed, our villages were among the first in the district to want to create their own capable community. We were single-minded: we wanted to change something, not to depend on the district, to make our own decisions,” recalls Nadiya Babanska, head of the community.

She says that before uniting according to a prospective plan, representatives of village councils made a professional assessment to determine whether the community could become capable. In the end, three village councils (that’s 14 villages) decided to go to the elections, and in 2017, the community received powers and switched to direct inter-budgetary relations with the state.

On being explained how the new entity would earn and what it would spend money on, all 14 villages agreed to unite.

Today, the community consists of 18 villages. There are 5 schools, 5 kindergartens, paramedic centers, and an outpatient clinic. In just two years, the total budget of the Mostove self-government increased by more than 10 times – from 3 to 33 million hryvnias.

After two difficult Covid years, there were development plans for 2022, but February 24 came and a terrible phrase “war has begun in Ukraine” brought all other plans to a stop. The first thing to cope with was natural human fear.

Nadiya Volodymyrivna admits: “Shock, fear – those were the first emotions of the war. We are thirty kilometers away from Voznesensk, and Russian tanks were near it. Cancer patients did not know where to buy medicine. Our soldiers arrived, they had to be fed. It was cold, there was no food, no gasoline, only gas in cylinders.”

People had to know what was going on. Like a telegraph, the keyboard tapped out messages: “During an air-raid alert, church bells will give alert signals in the villages of Mostove, Sukha Balka, Lidiivka, and Kozubivka, and loudspeakers – in other villages!”, “We are practicing local evacuation plans for emergency situations”, “We are creating a public formation (patrolling) in the community settlements.”

And then there appeared what the head would later call a commune.

There was another post on Facebook: “Who has ovens for baking bread? Please inform the village council.”

“People brought whatever they could – eggs, meat, vegetables. We were ready to make bread, when we realized there was no yeast. We called the manufacturer in the Lviv region, placed an order, and they sent us 100 kg of yeast.”

Every day, people came to the village council and offered something, asked how to help. The women undertook to fry cutlets. We found everything we needed in the villages.

Later, the commune expanded. IDPs arrived from the Odesa and Kherson regions, as well as from other districts of the Mykolayiv region. Today there are 520 of them in the community villages; among them – a lot of children. They live with locals. They planted potatoes, carrots, and onions in the spring. That was a significant help for the lonely elderly villagers. The need to buy vegetables at the market has decreased, and it is noticeable.

It’s a little calmer now. People concentrated and united. Criticism, which sometimes naturally sounded immediately after the community was formed, is no longer heard. The head did not hear from any person: “I will not do it. I don’t want to do it”. They respond to any call: they set up checkpoints, cooked food.

“There’s a road of state importance running through our community. I can’t even say how many people we helped get to the Kolosivka station during the evacuation. We did a lot of work, met at night. We stood in the cold for 6 hours at checkpoints in the winter. We withstood. Probably because we felt a great responsibility for everything that is happening,” Nadiya Volodymyrivna says and adds: “No matter what were our political views before, no matter who we voted for in the elections, when ruscists came to the Ukrainian land, people’s attitudes changed. There is a feeling that we are doing good things together.”

The Mostove community, like its neighbors, is a land of farmers. Everything here depends on the harvest – who and how will offer treatment, teach children, repair old roads and build new ones, organize holidays. No wonder, there were the following words in one of the recent greetings addressed to agricultural producers: “I wish you abundant harvests, fresh, fragrant bread on the table in every home, and may all your plans come true! May the Ukrainian land never be left without peasantry and the work of its tireless toilers be duly rewarded!”

I wonder what is so special about Ukrainians that they cannot be conquered. “Their humanity, persistency, love of freedom,” Nadiya Babanska answers.

Another question awakens some personal feelings in her, and a woman cannot cope with emotions. I want to know how the head of the Mostove community sees the first day after the war.

“I see the sun,” she says in a tremulous voice. “A lot of sun, people, flowers. I see joy on their faces.”

The war scattered her family. Her son is defending Ukraine, his wife is in Italy. But time will pass, and they will all unite at the family table, as the villages united around Mostove.