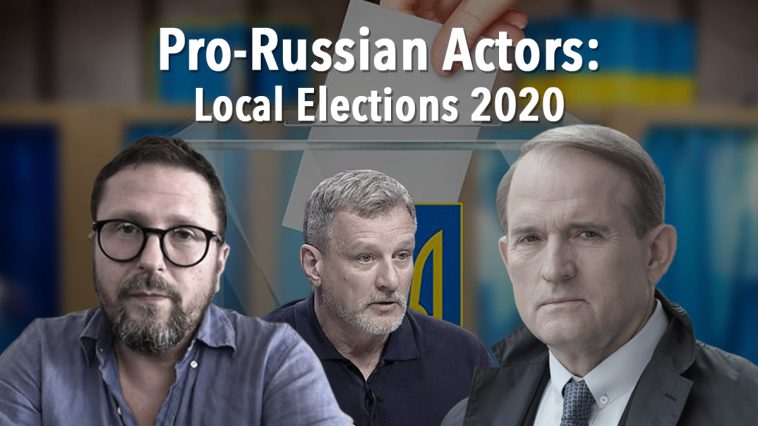 In Ukraine, dust settles after the nationwide local elections which were held under the new rules proving to be difficult for many voters – along with COVID-19 pandemic they heavily influenced the turnout. According to the Central Election Commission, it constituted close to 37%; this factor aside, the elections were generally recognized as free and fair.

Does it mean that this time Ukrainian voters escaped the looming threat of electoral meddling, which remains one of the most crucial – and widely discussed – strategies of hybrid influence? The answer is no. Along with several other trends, such as a general vote of no confidence for presidential “Servant of the People” party and an old habit of supporting familiar “experienced managers”, elections demonstrated just how big of a role local agents of Kremlin’s influence play in its strategy to politically re-conquer Ukraine. While the final results are still to be disclosed, preliminary post-electoral map allows taking another brief look at the key pro-Russian players in the state and the position they currently hold.

The political party led by Viktor Medvedchuk remains a key advancer of pro-Russian sentiment in Ukraine, dissuading its target audience from building partnership with the European Union and NATO, promoting the idea to reestablish ties with the Russian Federation and lift the sanctions, and consistently underlining that historically and culturally Ukraine and Russia belong together. To gain voter support – and to do Kremlin’s bidding – OPFL relies on the Russian rhetoric about the state it adapts for its target audience. In addition to claims about Russophobia and the rise of far-right, it constantly promotes the idea that Ukraine is under “external governance” on behalf of the Western states and international institutions, which is a reframed Kremlin’s narrative on Ukraine being “a puppet of the West”. In order to “regain sovereignty” and get rid of the so called external governance, OPFL calls for drastic measures including rejection of many anti-corruption policies portrayed as Western supervision over Ukrainian economy – and even for default.

It is worthwhile to note here that these ideas were shared by part of the presidential “Servant of the People” party, specifically by deputies linked to oligarch Ihor Kolomoisky. Another party, “For Future”, which received donations from company linked to the same oligarch, has also advocated for them – but in electoral terms failed miserably, as the rhetoric is firmly associated with OPFL. One of the crucial elements of OPFL’s success is its access to the media– in addition to 3 national channels (ZIK, 112, NEWSONE)  linked to Viktor Medvedchuk, the empire broadens with the launch of regional channels in Kyiv and Odesa (Kyiv.live and Odesa.live) with plans to reach at least Kharkiv, Dnipro and Lviv as well. The plans were clearly set in preparation for the local elections that brought OPFL substantial amount of votes in the city councils of Odesa (23,66%), Kharkiv (16,99% – preliminary results), Mykolaiv (28,57%), Mariupol (31,4% – preliminary results) as well as other cities mostly in south-eastern regions of Ukraine. In particular, it gained 38,6% in the formerly occupied city of Slovyansk, which showcases the failure of Ukraine’s government to build an effective communication strategy so as to counter Russian and pro-Russian media influence.

Anatolii Sharii, a notorious blogger currently residing outside of Ukraine, made his second attempt to enter Ukrainian politics – the first one, undertaken during the parliamentary elections, was not successful. It appears that things have somewhat changed, since his party managed to pass the barrier to at least several city councils, including major points on political landscape such as Odesa, where the party seems to have gained more than 7% of votes. Preliminary results demonstrate that cities where Sharii gained relative support are the same ones where OPFL scored, which is not surprising. Abovementioned TV-channels associated with Medvedchuk, including the regional ones, heavily promoted Sharii, giving him substantial amount of time on air, inviting him to comment on important issues regardless of his expertise and overall enhancing his visibility. Moreover, Medvedchuk personally insisted that his party considers Sharii an ally, clearly indicating the proximity of their views. When elections came closer, ZIK, 112 and NEWSONE ceased promoting other candidates, focusing mostly on OPFL and Medvedchuk personally, but the deed had already been done.

Arguably, Sharii’s support is mostly based on the failure of “Servant of the People” – as the President and his parliamentary force initially gave mixed signals and avoided clear language, often resorting to populism (not that other candidates did not), it allowed them to foment impressive numbers in 2019. With the passing of time, however, they began to drop, and part of the voters switched to Sharii, who shares ideas of OPFL but presents them in a less conservative form, which initially attracted many supporters of Zelensky and his party. Notably, party leadership(namely Antonina Beloglazova, former party leader and currently editor of its web-site and Sharii’s assistant) reportedly has ties with the Russian far-right movements and those involved in pro-Russian attempts to seize administrative buildings in eastern Ukraine in 2014-15. Taras Plaksii, party coordinator in several regions who comes from a family heavily associated with Russian Orthodox Church, in 2017 took part in an event organized by Russian Ministry of Defense. Taking this into consideration, distribution of promo materials picturing Ukraine without Crimea, rhetoric consistently aimed at polarizing Ukrainian population and support of Russian narratives by Sharii’s party and the blogger personally come as no surprise.

Ironically, the “Victory of Palchevsky” party faced a rather crushing defeat during the local elections. We have previously taken a look at Andrii Plachevsky’s links with the Russian government and how his campaign relied on manipulative sociology and support of Medvedchuk-linked channels. This support was combined with an extremely early start of the campaign and a substantial amount of funds for advertising in big cities, namely in Kyiv, where Palchevsky hoped to challenge the incumbent head of city council Vitalii Klychko. Not only did he fail in the capital, where Klychko enjoys visibly more support than his competitors and might avoid a second round altogether, but his party also did not manage to cross an electoral threshold in other city councils. It appears that one of the key tasks Palchevsky and his team faced – to disassociate from the links to Russia, which are unpopular in Kyiv – was failed.

These links are rather explicit, and the discovery that Palchevsky apparently still holds Russian citizenship (with dual citizenship being prohibited in Ukraine) is just one of their manifestations. Openly in favor of “rebooting” relations between Ukraine and Russia, where he spent much of his life (including education at the MoD-affiliated university) and even attempted to be elected to the State Duma, a promoter of “external governance” narrative, Palchevsky was quite obviously in league with OPFL. This cooperation reached an extent at which OPFL has reportedly attempted to transfer some of its votes to Palchevsky’s party so as to enhance pro-Russian presence in the city council. His attempts to be simultaneously pro-Russian and not affiliated with it, however, might have made a heavy contribution to disorienting his target audience, which mostly voted for the party they are already familiar with – OPFL.

Should Palchevsky have gained a substantial amount of votes, it would have been a rather successful pro-Russian project. Failure to do so, however, does not by any means imply that local agents of influence have to be disregarded – results shown by OPFL and Sharii’s party evidence this clearly. Moreover, they are expected to strengthen and solidify their influence (as well as expand the available network of media resources) in preparation for the next parliamentary elections. Kremlin is likely to be in favor of Medvedchuk and Sharii, who proved to be effective. While it still might invest in a new pro-Russian political force in Ukraine, Palchevsky’s failure is discouraging in that regard. So it is all the more likely it will focus on supporting its proven allies, attempting to win over some representatives of the current government – and polarizing Ukrainian population at the same time.