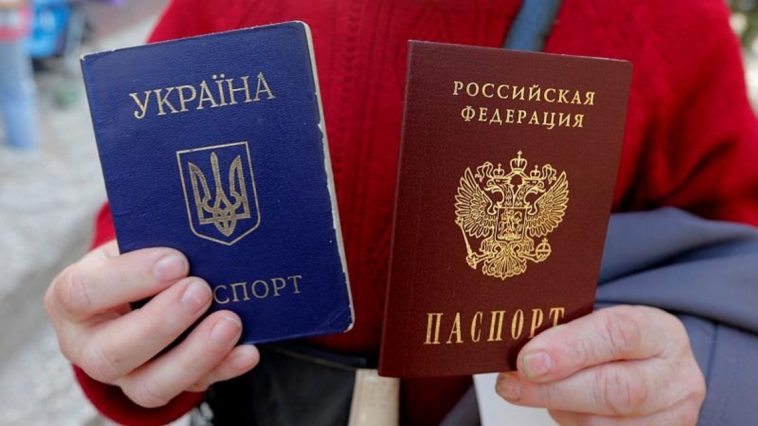 Time is against Ukraine: in the last seven years, since Russia illegally annexed Crimea and occupied part of Donbas, the demographics of those areas have changed considerably. Russia has been massively issuing passports to residents of the occupied territory in Donbas. In Crimea, Russia used forced passportization of the native residents. It has also resettled to the peninsula Russian nationals from elsewhere in Russia. Those practices further complicate Ukraine’s fight to restore the sovereignty over those territories. Here are the details.

Situation in Donbas. In the past four years, nearly one million Ukrainians got Russian citizenship, said Dmitry Kozak, deputy head of the Russian presidential administration in an interview with “Рolitique Іnternationale”.

The interview was republished by the Embassy of the Russian Federation to France.

“We have not only had residents of Donbas apply for Russian citizenship, but also people from elsewhere in Ukraine. Between 2016 and 2020, some 978,000 Ukrainians became Russian nationals,” Kozak said.

As of February 2021, nearly 470,000 residents of the so-called “DNR” and “LNR” (occupied territories – edit.) received Russian passports, he added. Issuing Russian passports to Ukrainians was a “humanitarian measure” taken to respond to the “blockade of Donbas”, Kozak said.

“As soon as the situation in Donbas is settled, we won’t need that solution, and we’ll switch back to the regular process for obtaining citizenship. Our actions are not in conflict with international law or practices,” Kozak said.

According to Ukraine’s Parliamentary Envoy for Human Rights Lyudmyla Denisova, the occupation administrations in Donbas have issued 583,000 Russian passports to residents of the occupied areas, including nearly 67,000 passports to minors.

By the end of 2021, Russia plans to issue 500,000 more passports to residents of the occupied parts of Ukraine’s Donetsk and Luhansk regions.

In summer 2019, the Russian Federation started illegally issuing passports to residents of the occupied territory in Donbas. Passports were issued in Russia’s Rostov region.

Massive Russification campaign in Crimea. In a bid to assert its power in Crimea, Russia has brought in some one million Russian nationals to the peninsula considerably changing the demographic makeup.

Ukraine’s economic losses caused by the annexation of Crimea are estimated at about USD 135 billion, the Center for Economic Strategy said. Money is not the measure of everything, and the Kremlin understands that. So Russia aims at taking over the peninsula by changing the demographics. By resettling to Crimea Russians from elsewhere in the country, particularly from the Caucasus, Russia creates a more favorable public attitude, and suppresses hotbeds of dissent. It is likely to complicate reintegration efforts after Ukraine restores its sovereignty over the peninsula.

According to the Russian data, as of early 2021, there were 2.4 million people in Crimea including 500,000 in Sevastopol. The occupation authorities lowered the numbers, Ukrainian experts say. Before the peninsula was illegally annexed, there were 2.3 million people, and the current estimate is that there are 3.1 million people in Crimea. After the occupation, 180,000 Ukrainians left the peninsula. The numbers show that the newcomers are about one million, and the majority of them are Russians.