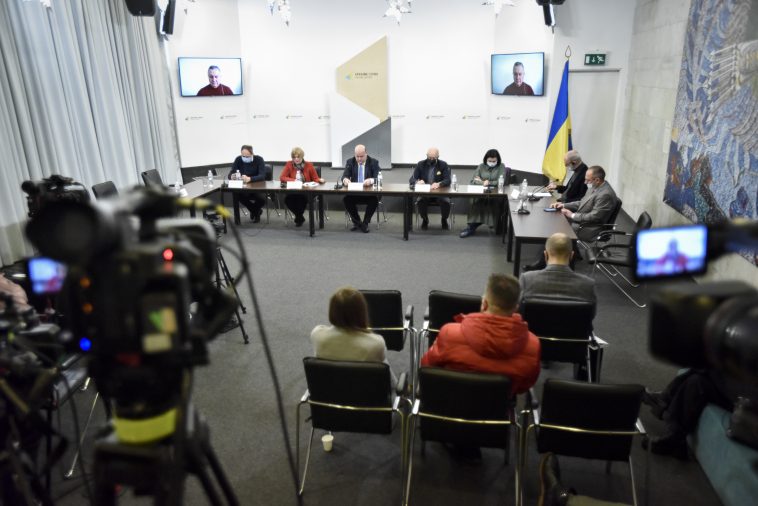 February 12, 2021 marks six years since the Minsk protocol was signed, its full name is “A set of measures to implement the Minsk agreements made in September, aimed to achieve de-escalation of the armed conflict in eastern Ukraine.” The document bears the signatures of the German Chancellor Angela Merkel, the President of France François Hollande, the President of Ukraine Petro Poroshenko, and the President of the Russian Federation Vladimir Putin. The leaders of Ukraine, France, Germany, and Russia also endorsed a declaration establishing the framework for the so-called Normandy format of the negotiations on the conflict settlement in Donbas. The Protocol signed in Minsk stopped the hot phase of Russia’s military aggression in Donbas. At the same time, true settlement of the situation in the region never happened. Today, parts of Donetsk and Luhansk regions remain occupied and beyond the government control. Russia continues to support and control the proxy administrations in the occupied territory while exercising military and political pressure on Ukraine.

Ukraine Crisis Media Center initiated and organized a public discussion inviting the participants to debate the following questions. What is the implementation progress of the Minsk agreements achieved in the past six years? Have the Minsk agreements exhausted their potential? What are the alternative mechanisms to settle the military conflict in Donbas? Do they even exist? What is the opinion of Ukraine’s allies?

Minsk agreements are a political accord and are not binding

Experts underscore that the Minsk agreements are merely a political accord and are not binding under the international law. Nevertheless, the Russian side insists that the Minsk agreements are a “law” and an international legal act that is binding, so that its paragraphs cannot be revised. The reason why the Russian delegation presses for it is the order of the paragraphs – the one on the local elections precedes the one on the restored border control. They must be implemented in that same order, the Russian side insists. Russia understands that it’s not acceptable for Ukraine and continues to block the negotiation process.

Oleksiy Reznikov, Vice Prime Minister, Minister on Reintegration of the Temporarily Occupied Territories of Ukraine, and deputy head of the Ukrainian delegation to the Trilateral Contact Group, emphasized that the Minsk agreements are a political and diplomatic gesture. Regardless of the fact that the UN Security Council welcomed the conclusion of the Minsk agreements and endorsed the implementation measures, the Council’s resolution does not say that they are binding.

“Minsk is a political process. The documents that were agreed are not binding under the international law. The Russian side says the UN Security Council confirmed that, but that’s not true. If you read the resolution attentively, you’ll find that it does not make the Minsk agreements internationally binding. However, these fakes are still being produced,” Valeriy Chaly, Chair of the Board at Ukraine Crisis Media Center, said.

Oleksandr Merezhko, MP (“Servant of the People”, Sluha Narodu faction) said that Ukraine would seek the implementation of the Minsk agreements to restore its territorial integrity and sovereignty. At the same time, he agreed with other participants that Minsk is a political agreement and is not binding under the international law.

Minsk is not implemented, Russia is to blame

Valeriy Chaly, Chair of the Board at Ukraine Crisis Media Center underscored that Russia not only sabotages the implementation of the agreements but also crafts the propaganda that blames unwillingness to implement Minsk on Ukraine. “No drastic change is happening. Meanwhile, Russia accuses Ukraine of not implementing Minsk. You’ve witnessed Russia call a UN Security Council meeting, you’ve heard the speeches exploiting the same narratives suggesting that it’s on Ukraine to make the first steps. But the situation is not changing on the Russian side in the first place,” Chaly said.

Iryna Gerashchenko, MP (“European Solidarity” faction, Yevropeiska Solidarnist) reminded that the occupation of Crimea and Donbas is the tactics that Putin uses to keep Ukraine in his sphere of interest. The situation is thus unlikely to change.

Etienne de Poncins, Ambassador of France to Ukraine said that despite some progress in the peace talks, the situation on the ground is still complex. He underscored the efforts of the President of France Emmanuel Macron in maintaining a constant dialogue with President Zelenskyi, President Putin, and Chancellor Merkel. “Since September 2019, we have seen some progress including the construction of the bridge in Stanytsia Luhanska, the release of prisoners, and the Paris summit in December 2019,” the Ambassador of France to Ukraine said.

Russia in denial on being party to conflict

“Russia continues to call itself a mediator between Kyiv, as they say, and Donbas, or between Kyiv, Donetsk, and Luhansk. We have to constantly remind them that the Trilateral Contact Group comprises Russia, Ukraine, and OSCE as a mediator. Ukraine has agreed to the OSCE mediation, but has never endorsed any kind of mediation by the Russian Federation,” Oleksiy Reznikov reminded.

If Russia considers the Minsk agreements binding under the international law and in accordance with the resolution of UN Security Council, one needs to figure out who the parties bound by the international agreement are, Oleksiy Reznikov said emphasizing inconsistency of the position. If the states parties are Russia and Ukraine, the Russian Federation needs to ratify the treaty and thus green-light it. If, based on what Boris Gryzlov said, Russia considers the defined areas of Donetsk and Luhansk regions part of Ukraine and has no intention of interfering into Ukraine’s sovereign affairs, the Minsk agreements cannot be considered as binding under the international law, the Vice Prime Minister, Minister on Reintegration of the Temporarily Occupied Territories of Ukraine.

“These negotiations are probably unique in the history of diplomacy, as we negotiate with the State that not only denies being a party to the negotiations, but also considers itself a mediator. The situation is absurd, but, unfortunately, that’s what it is,” MP Oleksandr Merezhnko said.

“Russia tries to disengage itself, to appear as a mediator, not as part of the negotiations, to force Ukraine to speak with the separatists. We fight against this dynamics and remind Russia of its commitments,” Ambassador of France to Ukraine Etienne de Poncins added.

The Ambassador of France to Ukraine reminded that the Minsk agreements are linked to the extension of the sanctions against Russia. If Minsk format is changed, it might affect the sanctions, so it needs to be carefully weighed up.

“I know that in Ukraine there is a debate about the validity of the Minsk agreements. We do believe though that it’s not by changing the format of the negotiations, that you will solve the situation in eastern Ukraine. It is the political will that is lacking, and at this point Russia bears a large part of responsibility. Since I arrived, I’ve heard about the ‘Plan B’ many times. In the meantime, you are to continue to follow the ‘Plan A’ – the Minsk agreements and the Normandy format,” the Ambassador of France to Ukraine elaborated.

“The Minsk agreements are the only basis today. There are two platforms – the Normandy format as the highest level where to seek the settlement of the international military conflict between Russia and Ukraine in Donbas, and the Trilateral Contact Group meeting virtually ‘in Minsk’ as well as related protocols and set of the measures,” Oleksiy Reznikov explained.