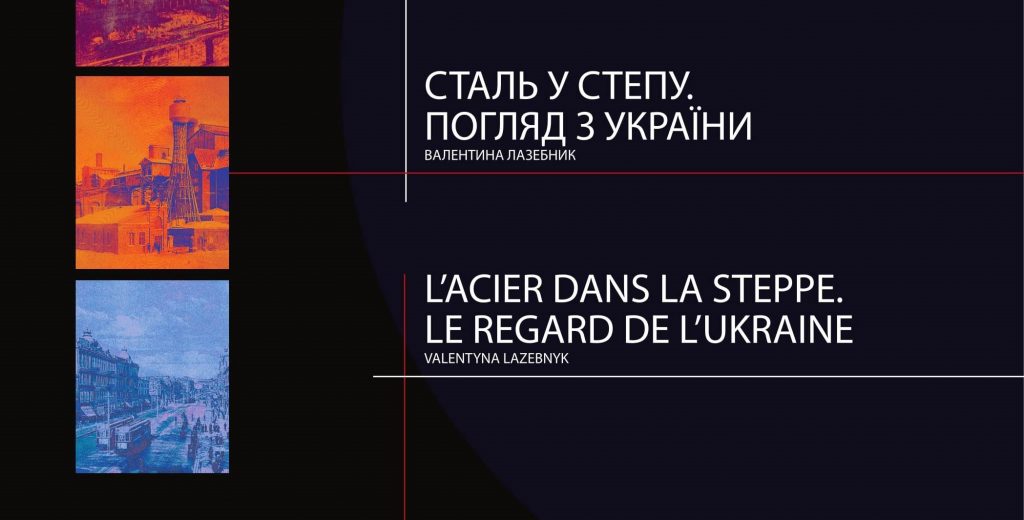 On Wednesday, November 15, at 2:30 PM, the press center of Ukraine Crisis Media Center (Ukrainian House in European Square, Khreshchatyk St., 2) will host a presentation of Valentyna Lazebnyk’s book “Steel in the Steppe. View from Ukraine”, the first special research into the topic of Belgian investment and entrepreneurship in Ukraine.

Participants of the presentation:

Luc Jacobs, Ambassador of the Kingdom of Belgium to Ukraine

Valentyna Lazebnyk, author of the book, Head of the Department of Research on the History of Ukraine at Dnipropetrovsk National Historical Museum named after D.I. Yavornytskyi

Valentyna Lazebnyk’s book “Steel in the Steppe. View from Ukraine” was prepared on the basis of museum collections of Dnipropetrovsk National Historical Museum named after D.I. Yavornytskyi and is a logical conclusion of a lively interest in the theme, aroused by the exhibition “Foreign Investments in Ukraine. Late nineteenth – early twentieth century. Part One: Belgium”, which traveled around Donetsk, Luhansk, Dnipropetrovsk and Vinnytsia regions with the participation of the Arts Department of Ukraine Crisis Media Center and with the support of the Embassy of the Kingdom of Belgium in Ukraine.

This book continues the series “Ukraine. Regaining history,” as it opens the hidden page of the Soviet era – foreign industrial investment and entrepreneurship, especially Belgian, in Ukraine in late nineteenth – early twentieth centuries. Belgium was the main investor of Ukraine, its activity was concentrated in Kryvyi Rih-Donetsk-Prydniprovya region (former Katerynoslav gubernia), so that the region was called “Ukrainian Belgium.”

Exploring the topic, the museum searched for materials. Philanthropist Dmytro Pirkl handed over to the museum valuable historic documents of those times he had been buying for a long time – shares and bonds of foreign joint stock companies operating in the region, which became the main source of the research. The work was also facilitated by the Embassy of the Kingdom of Belgium in Ukraine, which had a sincere desire to revive and preserve the common historical and cultural Ukrainian-Belgian heritage.

The mining and metallurgical industry in Donetsk- Prydniprovya area developed due to the attraction of entrepreneurial capital from England, Belgium, France, Germany, Switzerland, as well as of foreign engineers’ experience. The influence of Belgian entrepreneurial capital was especially large. It ranked first in terms of the number of companies created and the total volume of investments (until 1911).

Foreign corporatization peaked in the 1890s, when the rate of industrial development in Ukraine (then “Southern Russia”) knew no equals in the history of industry of not only pre-revolutionary Russia, but also other Western European countries. Iron, ore, and steel fever reigned in the region. Dozens of joint-stock companies were created, whose boards had distributed shares among investors long before issuing them. In some 10-12 years, the southern metallurgy flourished, and a new industrial district, well-known in Europe, was created. The book focuses on the European period in the history of the region’s development, which is currently insufficiently studied and remains little known to the general public. Donetsk-Prydniprovya region attracted significant Belgian investment capital. Belgian engineers and foremen came here along with it. In the middle of a deserted steppe, they built industrial enterprises, settlements with developed infrastructure, and eventually laid the foundation of the future industrial region. Although Belgian companies were widely distributed in the Ukrainian economy, they were mostly involved in mining, metallurgical, metalworking, machine building, chemical, and construction industries, as well as in urban transport. The companies were founded in Brussels, Seraing, Couvin, Liege, Marchienne-au-Pont).

The research dispels the myth about the Soviet industrialization of the center, east, and south of Ukraine. Thus, according to historians, on the eve of the First World War, Ukraine surpassed many Western European countries in terms of the heavy industry development. One of the main sources of Soviet industrialization was the nationalization of industry. It was in Ukraine that dozens of private industrial enterprises belonging to foreign, and in particular, Belgian capital, were nationalized.

The readers will see pages with evidence and discoveries made as a result of the study. This is a reliable, concrete historical and statistical material about the actions, results and consequences of activities of Belgian investors and entrepreneurs in the region.

The book solves the problem of popularizing a complex and little-known historical topic. It presents 270 historical documents of those times and events: securities of Belgian societies, photographs and portraits of Belgian and Ukrainian entrepreneurs, heads and founders of factories and mines. The photographs depict giant metallurgical plants with blast furnaces, which impressed the imagination of contemporaries. Colorful, artistic advertising materials in Russian and French were also used: unique photos of Orthodox and Catholic churches, theaters, and settlements built thanks to investments; photos of workers and leaders of factories and enterprises.

We hope that the book will allow us to adjust and expand existing views on the history of economic development in Ukraine and will give a certain impetus to further studies on this topic, both in Ukraine and in Belgium.

The book was published at the initiative and with the support of the Embassy of the Kingdom of Belgium in Ukraine and Dnipropetrovsk National Historical Museum named after D.I. Yavornytskyi.

Additional information about the book: