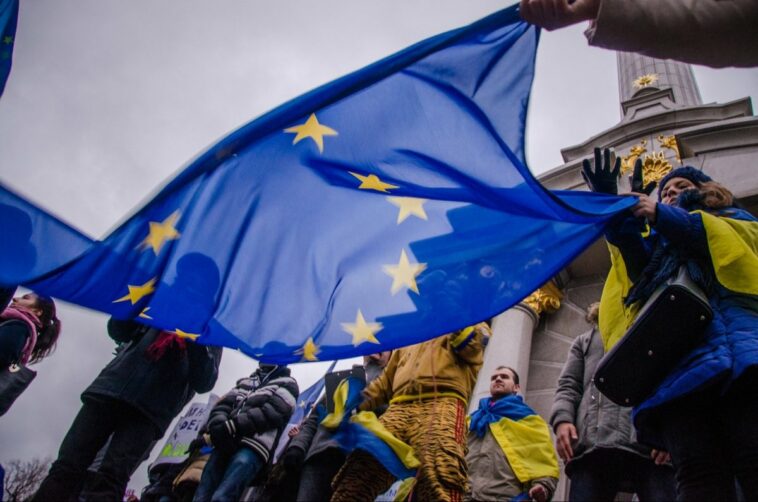 On November 21, Russia-backed militants made two attacks, of which one included the use of weapons banned under the Minsk agreements. They fired from 82-mm mortars and anti-tank grenade launchers toward Popasna, in Luhansk region.

The Ukrainian troops incurred no casualties.

On November 21, Ukraine marks the Day of Dignity and Freedom. Eight years ago on this day, protests erupted as Ukraine’s then political leadership rejected the Association Agreement with the European Union. The protests were dubbed Euromaidan or Revolution of Dignity.

Remembering Euromaidan, a few thousand people gathered in Maidan square in Kyiv on the evening of November 21. A large banner was unrolled in Maidan with portraits of President Zelenskyi and the chief of his Office Yermak. The banner read: “Their mockery humiliates us. Let’s protect our dignity.” Later, the wind tore the banner in half, Ukrainska Pravda said.

Ukrainian Soviet film director Leonid Bykov, Ukrainian dissident poet Vasyl Stus, and Greek Catholic Priest Omelyan Kovch were some of the protagonists of the address. The President also mentioned the Revolution on Granite, the Orange Revolution, and the Revolution of Dignity.

The head of state, the Speaker of the Parliament Ruslan Stefanchuk, and the Prime Minister Denys Shmyhal paid tribute to the fallen Euromaidan activists by laying flowers and lighting up candles on the memorial site on the Heaven’s Hundred alley near the square.

Putin has not made his decision on this point, the new Ukrainian Defense Minister Oleksiy Reznikov said Friday. Russia sent more troops and materiel to occupied Crimea, and deployed Iskander short-range ballistic missiles and other weapons within striking distance of Ukraine’s border, Budanov said.

Russia masses troops near the Ukrainian border in a move to raise the stakes in the future talks, said Secretary of the National Security and Defense Council of Ukraine Oleksiy Danilov.

Commentary from Russia. One should not rule out possible provocations, a pretext to blame Russia for an attack against Ukraine, said spokesman for the Russian President Dmitry Peskov. He did not provide further details on the nature of those provocations.

Setback in certification. The Swiss-based Nord Stream 2 AG created a German subsidiary to own and operate the German section of the pipeline. Certification would be suspended until all relevant assets and employees were transferred to the subsidiary, the regulator said.

“The subsidiary must then fulfil the requirements of an independent transmission operator,” the regulator proceeds.

“The certification procedure will remain suspended until the main assets and human resources have been transferred to the subsidiary and the Bundesnetzagentur is able to check whether the documentation resubmitted by the subsidiary, as the new applicant, is complete. When these requirements have been fulfilled, the Bundesnetzagentur will be able to resume its examination in the remainder of the four-month period set out in law, produce a draft decision and deliver it to the European Commission for an opinion, as provided for in the EU legislation on the internal market,” the regulator said.

Ukraine’s position on certification of Nord Stream 2. If Russia wants to put Nord Stream 2 into operation, there can be no exception, and the pipeline must conform to the Third Energy Package, said Olha Bielkova, director of public and international affairs at Ukraine’s gas transmission operator, in a column for “Novoe Vremya” (New Times).

Germany and Europe have every right to demand that unbundling, third party access and transparent tariff requirements apply to the entire length of Nord Stream 2, from Ust-Luga in Russia to Greifswald in Germany.

Ukraine will continue to insist that neither Nord Stream 2 AG, nor a German subsidiary can or should be certified as an independent gas transmission operator.

Differentiation between sections of the pipeline is meritless, Bielkova said. Nord Stream 2 is one continuous pipeline that Gazprom has championed and funded. A Gazprom subsidiary would not change the situation – regulations, such as unbundling requirements, third party access and transparent tariffs, must apply to the entire length of the pipeline.

Attempts to approach differently sections of the pipeline inside and outside of German territorial waters do not follow the letter and spirit of the EU law.

The jury was headed by Sahraa Karimi, film director and head of the Afghan film organization, evacuated from Afghanistan by Ukraine’s efforts earlier this year.

“Rhino” is a criminal drama set in Ukraine in the 1990s. Sentsov started working on the film in 2011. His work was halted, as the film director was illegally imprisoned by Russia. “Rhino” was co-produced by Ukraine, Poland, and Germany, and supported by Eurimages program.

Coronavirus cases across Ukraine are heading down. On November 21, Ukraine recorded 7,464 cases, 326 deaths, and 10,540 recoveries. Hospitalized were 2,501 people with suspected or confirmed Covid-19.

That is the smallest daily increase since October 4 (on October 3, Ukraine recorded 4,821 cases).