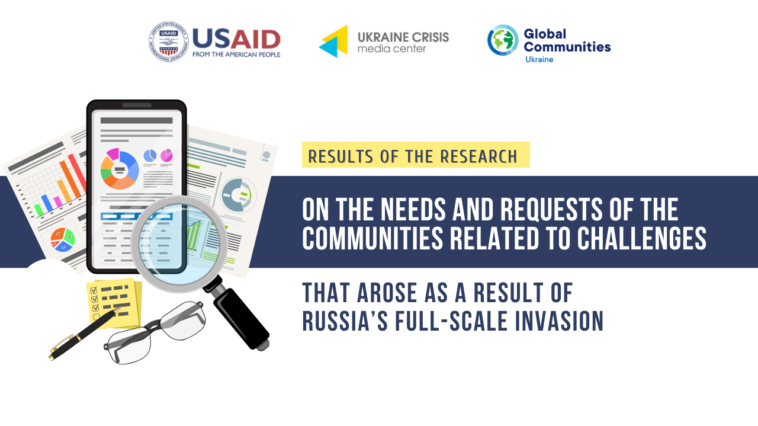 The research of the needs and requests of communities related to the challenges that arose as a result of the full-scale invasion of the Russian Federation was conducted by the Ukraine Crisis Media Center with the support of the USAID DOBRE Program.

The purpose of the research is to identify the needs and requests of the communities, which could aggravate the challenges already existing in the communities, in particular with the appearance of a large number of internally displaced persons.

The study was developed and implemented during April – May 2022. The data collection included regions that did not undergo occupation or de-occupation and on whose territory no hostilities were conducted.

For the study, 45 communities from four pilot regions were selected from among the partners of the USAID DOBRE Program, where a large number of IDPs are registered. According to the report of the International Organization for Migration, for the period from June 13 to June 26, 2022, the largest number of IDPs were registered: in Ivano-Frankivsk Oblast – 94,053 people, Kirovohrad Oblast- 80,097 people, Ternopil Oblast – 88,975 people, and Chernivtsi Oblast – 79,581 people.

“The research itself was conducted through interviews and questionnaires, with a comparison of open and closed questions. In addition, group meetings were held with the leadership and with the active members of the communities. And the results of the interviews were significantly supplemented with information from these meetings. Starting in April, we interviewed city and village heads, people who coordinate assistance to IDPs, and people who receive these services, and we realized that the communities have more or less coped with the first big crisis wave. And now you need to think about what to do in the conditions of changing demographics. We are talking mainly about small towns and settlements, for which 1,000-2,000 people constitute 15-20% of the population,” noted Maksym Yeligulashvili, researcher, dialogue facilitator.

During the research, resources and capacity of communities to overcome challenges, their risks and problems, key requests, solutions and practices were analyzed.

Based on the results of the research, recommendations were developed for international organizations, local governments and civil society organizations.