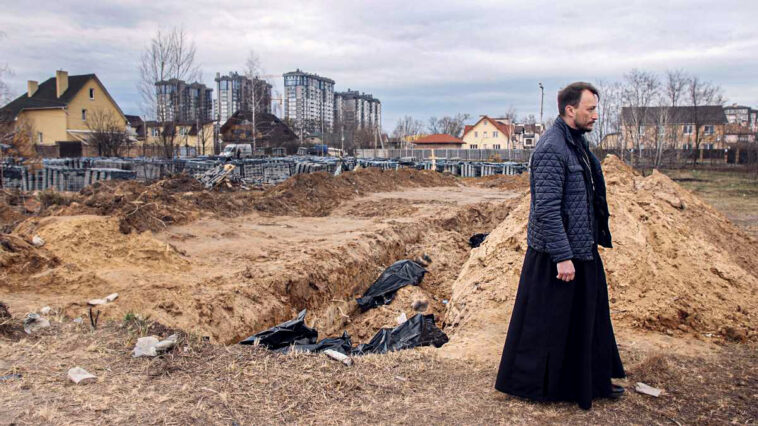 There is a scary picture in the liberated cities of the Kyiv region. With the background of terribly destroyed facades and burnt equipment, law enforcement officers continue to record Russian war crimes and take away people’s bodies from the streets.

Ukrainian Security and Cooperation Center made a coverage of the situation in the liberated Bucha, Hostomel, and Irpin.

Photos below show destroyed houses. Some of them have only broken windows, but some – destroyed facades and apartments after the Russian shelling.

A fire broke out in many buildings after the shelling. This is what the “demilitarization of military facilities” allegedly carried out by the Russian army looks like.

The Russians fired on civilian cars

Many military vehicles remained on the streets. For example, the authors of the coverage showed a burned armored personnel carrier standing near a residential building. “Allahu Akbar” is written on the wall next to it.

In all corners of cities, it is possible to see shot civilian cars. There are always a lot of shell casings on the side as if the Russians wanted to completely destroy the vehicles with automatic weapons.

Someone was stuffed into bags, and someone was burned

The liberation of the cities of the Kyiv region has exposed the truth to the whole world – the Russian army сommits terror. Russian monsters have come not only to destroy peaceful cities but also to kill thousands of Ukrainians. Throughout the occupation, they tortured, raped, and shot civilians. Their victims were men and women, children, and the elderly.

When the occupiers were in the cities, they sometimes tried to hide the genocide they committed. The occupiers stuffed some of the bodies into bags and buried them. Police found many corpses doused with flammable substances – the Russians tried to burn them. During the retreat, occupiers simply shot all civilians.

🔞WARNING! The photos below show all the meanness of the Russian army and can cause shock. We do not recommend viewing for vulnerable or minors.

We will not forgive – the consequences of atrocities of Russians in Bucha: watch the video below.