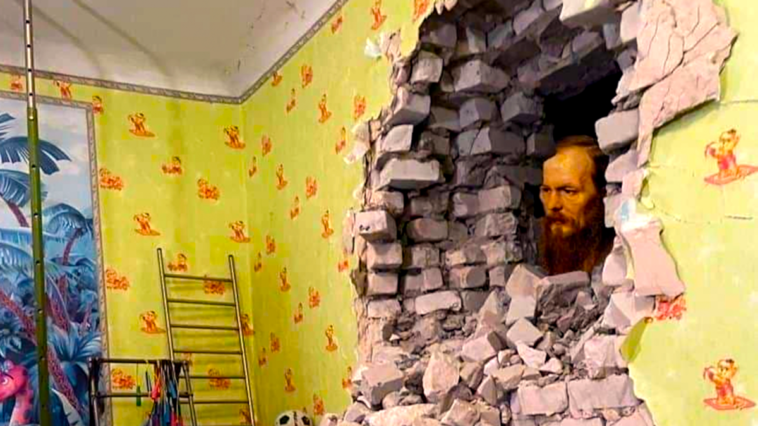 Fyodor Dostoevsky and the consequences of the shelling of a kindergarten in Stanytsia Luhanska, Ukraine by the Russian army. Collage by the unknown author.

Why Russian authors always create excuses for intervention, glorified the Russian elite and spoke out against basic freedoms.

There are three pillars in being a Russian author: become a sell out to the ruling elite, emigrate or die. Sometimes, Russian authors combine a few of these options. We won’t include those who are dead and won’t mention the details of their deaths: about Zamyatin, Yesyenin, Mayakovsky, Mandelstam, Babel, Ilfa and Petrov, Tsvetaev, Kharms, Yerofeev and others. The majority, which tried to create real literature, were forced to leave. Not to mention emigrants, some of them like Brodsky or Solzhenitsyn, experiencing life in the free world and even obtaining Nobel Prizes did not stop them from spread chauvinist hysteria. Looking at other authors, who used their ink and paper to glorify Russian brutality, brainwashed their “comrades” in aim to convince them of their own superiority and blind them for the truth. Russian literature either voice their pride of Russian greatness, or in a more desperate tone – voicing concerns for the lack of freedom and slavery of the Russian people.

What gave birth to the era of new Ukrainian literature of the late XVIII century? That’s right, from the freedom-loving and brilliant “Eneida”, which was an instant hit at the time, as well as nowadays. What gave birth to the new era of Russian literature at this exact time? (Earlier literature was literally non-existent: they have instead decided to appropriate literature from the X century). Appropriating foreign literature – is a natural reflex common to Russian “giants” of literature, always used to fill the void in their literary history. The truly first Russian authors – Lomonosov, Sumarokov, Trediakovsky, Kheraskov, all started with the same ode – in praise of their rulers. Sumarokov even had the audacity to write a series of “loyalty” pieces in honour of four monarchs, which preceded one another: Anna Ioannovna, Elizaveta Petrovna, Ekaterina II and her son Pavel. Later, came a piece on Potyomkin. If one would read the piece “Ode in honour of her majesty, empress Ekaterina II on the occasion of the capture of Khotyn and Moldavia” , every line would be staggering, as Sumarokov openly expresses the wish for:

“A great, vast land, Which carries pride of the entire East, Alongside the shores of Egypts, a hot South And the Jets of the streams of Euphrates Will all fall under the Russian sword, And villages shall be plundered”

I cite this in particular because I will not cite the proceeding text: you can rest assured – Russian literature still abides to this rhetoric. In their minds and wishes, this nonsense is still relevant. Of course, not all authors, and hence common people, think along these lines, however the abundance of those who do, is staggering. Sure, go ahead and ‘take’ Egypt and Euphrates.

Read more: Justification of genocide: Russia has openly declared its desire to exterminate Ukrainians as a nation

“The beacon of Russian Poetry” Alexander Pushkin struggled his entire youth, ‘dispatching’ most of his friends to prison, who tried to fight for liberty from Tsar Nicholas I in the Decemberist revolt of 1825. Perhaps, maybe this wayed heavy on his conscience, motivating him to his countless ‘duels’ with other men, ultimately leading to his demise. However, he had the time to right a few pieces to reiterate his loyalty to Nicholas I (who proceeded to send his friends to Siberian camps nonetheless). No, Pushkin was not a cynic, he really believed in the good will of the Tsar, and a good prospect in an authoritarian government. Eventually, he even became a high-ranking statesman and was very well-off. One can see more of this in his analogous obsession with Peter I in his “Poltava” piece, where Ivan Mazepa (Ukrainian Hetman’) was portrayed as a traitor, while Peter I was almost pictured as a saint’. Pushkin in time, abandoned his previously liberal ‘sins’.

When mentioning Mykola Khohol’ (Nikolai Gogol), little is required to be said to prove our point. He had an insufferable life in the north – he tried to make it to Kyiv, he travelled all across Europe and lingered in Rome, just not to return too early. As if he had a hunch – Russia could kill him. One way or another, it did. As long as he devoted his life to Ukrainian literature, his texts were optimistic and brilliant. When working on his Russian pieces, the results were depressing and eventually led him into a psychologically unstable state. Clearly, such examples of bipolarity can be insufferable and sometimes even fatal. This is a collision of unprecedented proportions: imperialism encourages great talents at first and then annihilates them: Pushkin, Gogol, Lermontov, Chekhov… The circumstances of their deaths are different but the cause is identical – intellectual and creative repression.

Lermontov and Tolstoi were soldiers amongst occupational forces in the Caucasus and Crimea (as per our knowledge, the amount of authors with this kind of ‘experience’ is quite high). Without a doubt, after a more detailed analysis of their works, one can read what stand between the lines – chauvinist and expansionist rhetoric masked under patriotism. Of course, they add a few words to commemorate the destruction of natives in the Caucasus (rather cynically and melodramatically). Nevertheless their work is overshadowed by a sense of doom and irreversibility of their actions. The fight is ‘doomed’ with only one possible outcome they often say. Dostoyevsky can be said is the leader in this sentiment. He, above all, has the ‘freedom’ to choose in which theme and direction his work goes to. This in turn, means that he actually does not mean any freedom at all.

The White Imperial Army ideologue Bugalkov put a lot of effort in the discreditation of the Soviet government, nevertheless, maintained a Russian imperialist and expansionist rhetoric. His piece “The White Guard” is filled with a sense of greater Russian superiority of culture and despair of the death of the Russian Empire. In his play “Flight” this is reiterated yet again. However, the most ‘sinful’ notion can be seen in the glorification of Tsar Ivan Grozny. An absolute maniac who ruled Russia for almost 40 years in the XVI century, organised a repressive state apparatus, massacred his own citizens, is portrayed in a sympathetic and even comedic manner by Bugalkov. In other words, Bugalkov completely reverses the reality of this figure to a more attractive one. One would ask: why would he do that? The answer is quite simple: Bugalkov was trying to appease Stalin, who himself was a great admirer of Ivan Grozny. Nevertheless, Bugalkov’s attempts were all in vain, as the play was banned anyway. However, this play was found a new beginning in the 1970’s and found its popularity on screenplay. Incense under the watch of an “iron fist” of the regime and the pursue of liberty-promoting literature not only influenced “serious” literature but even fantasy genres. Numerous fantasy writers such as the Strugatsky brothers, painted a more liberal, democracy-leaning depiction of the world, however, their works continued into a different direction, where the paternalistic immunity of the state was glorified. Russian expansionist was metaphorically spreading to other planets (creating a new multiplanetary order). The piece “The Final Circle of Paradise”, echoes Putin’s propaganda of today.

All in all, the literature mentioned, which was brought to the ‘shores’ of publicity, supported the propaganda spread by state-led media. For a while, Boris Strugatsky managed a literary studio/school which laid the paths for many fantasy writers for years to come. It is from this school that even more aggressive and expansionist ideas dwelled – something along the lines of works such as “London must be destroyed” or “War of 2010. The Ukrainian front”. These are the names of modern novels with millions of copies sold across Russia. In time, this will be forgotten. However, the long legacy of the Strugatsky brothers unravel the seriousness and depth of a century-long problem found in Russian literature.

No matter what, Russian literature, from its early beginnings and to this day, serves an ideological purpose, one chartered by the many Russian ruling elites. Not even the most prominent and ‘free’ novelists have managed to escape this trap. Upon our analysis, using methods of detective Hercule Poirot, we have clearly established that the general line of thought in Russian literature is consistently based upon the glorification of the ruling elite. More often than not, literature always excuses military aggression and Russian expansion. “Freedom is Slavery” is another way to describe the spirit here. This is their worldview, a clearly outdated one. For further notice, upon picking up a Russian book – he/she picks up a suspicious item, perhaps a bomb that failed to detonate. Pass it over to professionals who can defuse it, or just throw it away.