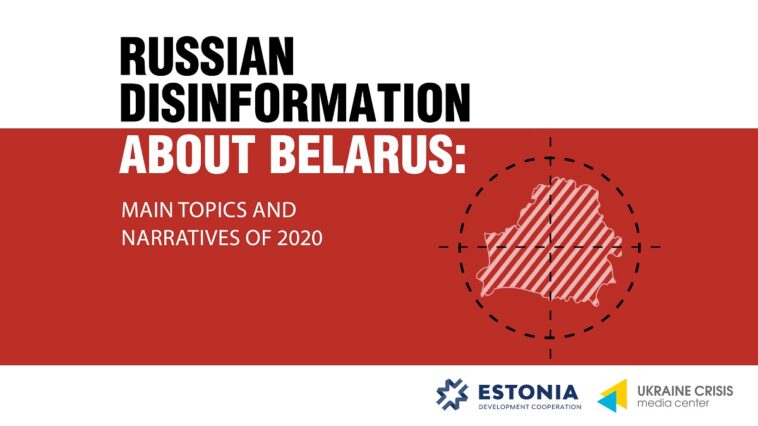 The study by the Hybrid Warfare Analytical Group at Ukraine Crisis Media Center scrutinizes the key topics and narratives about Belarus covered on Russian television in 2020 with a focus on rigged elections and pro-democracy protests in the country.

You can read the research in Belarusian down below.

The Kremlin has provided active assistance to Belarusian dictator Lukashenko throughout his struggle to retain the presidency after the rigged elections, which led to mass protests followed by increased repression of pro-democratic forces and large-scale police brutality. One of the key elements of Russian support for the authoritarian regime was spreading disinformation on pro-democratic protests.

In such circumstances, it is particularly important to determine what narratives about the Republic of Belarus were promoted by the key Russian media and what their dynamics was, as the political goals of both regimes regarding pro-democratic protests were at least partly the same and consisted in the need to suppress them in order to preserve Lukashenko’s power and Russian influence in Belarus, which became a single option for the authoritarian Minsk.

In this report, UCMC examines in detail the Kremlin’s information policy towards Belarus and media support for Alexander Lukashenko’s authoritarian regime, as well as the dynamics and peculiar characteristics of Russian disinformation about Belarus.

The results of the content analysis made it possible to identify 6 main topics about Belarus covered by the selected Russian media in 2020:

The report thoroughly analyzes each of these topics, along with their evolution over time and their correlation with the socio-political context of the Republic of Belarus and the Russian Federation.

The study is based on quantitative content analysis, which included more than 2,000 news stories of the three most popular Russian TV channels – Channel 1, Rossiya 1, and NTV. The primary data were converted to text format and made into a common database with the technical support of the Kwendi Group.

The study was conducted within a joint project with the Estonian Centre for International Development.