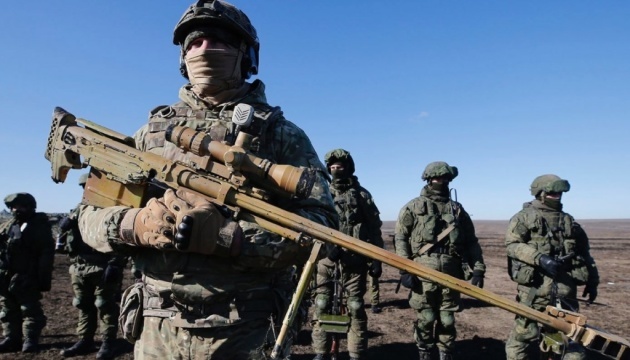 On December 21, Sergey Shoigu, Russia’s Minister of Defense, announced the increase in funding for Russia’s armed forces in 2022. As he mentioned during the enlarged meeting of the Ministry of Defense of the Russian Federation, it is planned to increase Russia’s armed forces’ strength by almost 15.000 troops “to enhance the attractiveness of military service and bring highly qualified specialists to the armed forces”.

Along with the development of the state standard on “Urgent burial of dead bodies in wartime and peacetime” coming into force in February 2022, this is one of many recent measures indicating a high probability of Russia’s military escalation in early 2022, predicted by Ukraine’s intelligence and our Western partners. Since November, the Kremlin’s rhetoric has changed from complete denial of Russia’s military presence on the Ukrainian border (including troops and military hardware remaining there since the April escalation) with further blaming both Ukraine and the US for preparing military aggression and “aggravating the tension” to direct threats down to deployment of Russian missiles targeting Europe. Whether it is Russia playing with fire or taking calculated risks, tension between Moscow and the West has reached an unprecedented level since 2014.

Amassing 122.000 Russian troops near Ukraine’s border and 143.500 troops 400 kilometers away, Russia exceeded the level of escalation in April with 113.000 troops involved and started recruiting mercenaries with military experience for a “special mission” in the occupied Donbas. Moreover, the border with Belarus is now an additional risk, considering A. Lukashenko’s recent statements about Belarus-Russia joint military exercise on the Belarus-Ukraine border in early 2022 and potential deployment of Russia’s nuclear weapon in Belarus. Being now completely isolated from the West, the authoritarian regime in Minsk is more dependent on the Kremlin than ever. Therefore, the risk of using Belarus as another military springboard has always been high, but now it has increased.

Russia’s consistent pressure on both Ukraine and its Western partners has now reached a new level due to the Kremlin’s requirements of “long-term security guarantees” from the US and NATO laid out on December 17 by the Russian Foreign Ministry, such as denying Ukraine’s NATO membership and urgent limitations on the alliance’s military cooperation with Eastern Europe, including Ukraine and Georgia since the situation is “critical and needs immediate attention” These demands, both hypocritical and absurd not only demonstrate that Russia still seeks to control all former Soviet republics but also are strengthened by pressure as energy market, including the skyrocketing natural gas prices for the EU which exceeded the all-time record of $2000 for 1000 cubic meters, and pushing the Nord Stream 2, the certification of which is now being delayed by Germany.

Like any hybrid influence, these steps of Moscow are accompanied by a massive disinformation campaign with the following key narratives:

1) “Ukraine is an aggressor state preparing for military escalation in Donbas which therefore needs to be “protected”;

2) “NATO and the US push Kyiv towards the escalation” since Ukraine is “nothing more than an anti-Russian political project”;

3) “Western partners will abandon Ukraine and it will not be able to stand up to Russia” while dealing with possible protests against utility tariffs escalation, which are supposedly encouraged by pro-Russian actors.

All in all, this is not the first escalation that Ukraine has been going through since the beginning of the Russo-Ukrainian war in 2014. Both muscle play and panic incitement have always been traditional elements of the Kremlin blackmail policy aiming for both political and psychological exhaustion. However, this goal can’t be reached if Ukraine and its partners remain calm and increase their defense capacity.

After all, Ukraine has been coping well with defensive war for almost 8 years, although the economic and political pressure on Russia from the global community is an integral part of the de-escalation process, together with constant consultation, maintaining openness and trust, and willingness to cooperate. However, the latter is not the Kremlin’s top priority since Moscow is still undermining Ukraine as a sovereign party through the rhetoric of devaluation and the classic “external governance” meta-narrative.

Therefore, it is of great importance for Western partners to emphasize the subjectivity of Ukraine in their information policy since any careless or ambiguous statement may be used and will be used by the aggressor state in its disinformation campaigns. “Nothing about Ukraine without Ukraine” is a safeguarding principle for both sides. The clear threat of sanctions and increased political and military support for Ukraine may be enough to deter the Kremlin from large-scale intervention in Ukraine.

The Kremlin’s arguments that such aid will “provoke” Moscow for “counter-measures” are not convincing, since Ukraine did not provoke Russia to occupy Crimea and Donbas. So “security guarantees” rhetoric for a state that constantly undermines this very security on a global level is a refined continuation of the Kremlin’s disinformation about the “aggressive” West that is “forcing” Moscow to defend itself from some invisible foe.