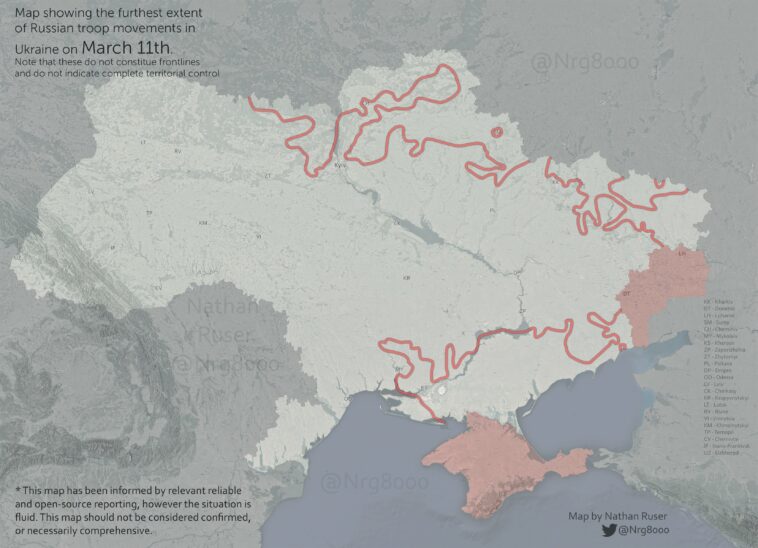 Russia plans a terrorist act on Chornobyl power plant. Vladimir Putin ordered a terrorist act on the Chornobyl nuclear power plant. The Russian troops that control the plant plan to fault Ukraine for the industrial disaster, reported the Main Intelligence Department of the Defense Ministry of Ukraine. They fabricate fake evidence. Putin’s nuclear blackmail aims to break the international support for Ukraine as the ground offensive and pressure through direct talks yielded no result.

The International Atomic Energy Agency has lost contact with safeguards monitoring systems installed at the Chornobyl power plant. The site lost all external power supplies. Emergency diesel generators could support the plant’s safety system for 48 more hours. The Russian troops blocked access to the plant for the Ukrainian technical service team. Alyaksandr Lukashenka ordered Belarusian technical service team on the site. Russia’s subversive groups reportedly entered the plant to prepare a terrorist act. In the past days, the Russian troops conducted air strikes on the Zaporizhzhia nuclear power plant and the Kharkiv Institute of Physics and Technology that has an experimental nuclear reactor.

Provocation: Russia bombs Belarus to drag it into war. Russia staged a provocation to drag Belarus into the war with Ukraine. At 2:30p.m. on March 11, Russian aircraft flew into Ukraine, made a U-turn and conducted an air strike on the town of Kopani in Belarus, the Air Force Command of the Ukrainian Armed Forces said. Belarus readied to invade Ukraine at 9:00p.m. on March 11, Ukraine’s military said.

Ukraine on Fire: daily video dispatch in English by UCMC and partners

Oleksandr Senkevych, Mayor of the city of Mykolaiv

Ivanna Klympush-Tsintsadze, MP and Head of the committee for integration of Ukraine to European Union

If you want to support Ukraine against Russian aggression, check the link with our recommendations – https://uacrisis.org/en/help-ukraine