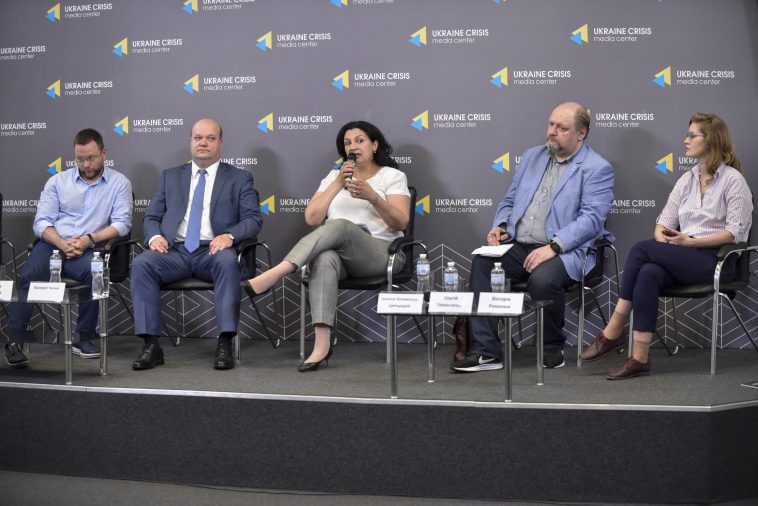 Russia’s commitment to the “Russian World” (Russkiy Mir) concept gains momentum, experts say. There were the times the Russian Federation tried to apply soft power through a variety of actors ranging from the Russian Orthodox Church to civil society organizations, said Valeriy Chaly, Chair of the Board at Ukraine Crisis Media Center. When the developments in Ukraine in 2014 made it clear that those efforts failed, Russia turned to hard power and weapons as a tool of last resort.

“Today, in Russia, media spread false information, while Russians believe those news pieces are true. False narratives are voiced by the government, they are part of the state policy. That means that we need to approach the efforts to counter disinformation as a state policy,” Valeriy Chaly said.

Beyond disinformation. The “Russian World” is not only about disinformation, said Mykyta Poturayev, MP of the “Servant of the People” (Sluha Narodu) faction. It comes as a classic cultural construct, ideas that can fit into it are endless. If one buys into those ideas, the mastermind behind them wins. Cutting access to propaganda news pieces on television, radio, and streaming platforms, and systematically countering the dissemination of Russian disinformation and propaganda are the steps to be taken, the MP said.

“We are facing a smart enemy that has analyzed all of their mistakes. We see Russia’s cultural expansion embracing the countries within its sphere of influence. The world does not clearly understand that the ‘Russian World’ is not just a threat to those countries, it also targets all liberal democracies and undermines their principles. (…) In the past two years, the Russian government turned into a fascist regime. In the world, attitude and relations with a regime like that need to change,” Mykyta Poturayev said.

Imperial sentiment. Ivanna Klympush-Tsintsadze, MP of the “European Solidarity” (Yevropeiska Solidarnist) faction underscored that Russia did not give up on the imperial idea that cannot be complete without Ukraine.

“Primarily, inside the country, we would need to design a system of national resilience that would provide multi-layered responses to the threats posed by the ‘Russian World’. Today, the civil society is more prepared to respond to those threats than the government. It’s unfortunate that the free world realizes information threats late. The ‘Russian World’ takes different forms in different parts of the world, the concept is not static. The forms it takes in Ukraine and the U.S. can be different,” Ivanna Klympush-Tsintsadze said.

“Today, Ukraine is a training ground in Russia’s hybrid war. Performance of law enforcement agencies, and the intelligence service is questionable, and, in my opinion, improper. Our embassies abroad are underfunded. They need to be funded properly to hold information campaigns and promote Ukraine,” Solomiya Bobrovska said.

“In the world, new generations actively search for new models of development. We don’t like the ‘Russian World’, is there anything we can offer instead? What is our ‘Kyiv world’? After Zelenskyi won the election, the Ukrainian community abroad watched his first steps with enthusiasm. Addressing the post-Soviet countries, he said that if Ukraine had succeeded to become a democracy, they would succeed too. Two years later, is the intellectual idea of freedom shaped yet? It seems that the space is still empty,” Violeta Moskalu said.

“Traditional values” and Soviet past. Dissemination of the “Russian World” fits well into the concepts voiced by the Russian academia and political establishment a few decades ago, said Serhiy Herasymchuk, deputy executive director, director of the Regional Initiatives and Neighborhood Program with the think tank Foreign Policy Council Ukrainian Prism. Knowing the Russian political thought and history, one can make projections of the several next steps by the Russian government.

No global achievements without Russia. If there were no Russia, humanity would not have achieved anything – that’s the key message in the “Russian World” promotion at home and abroad, said Viktoria Romanyuk, deputy chief editor at StopFake. Recently, those messages were spotted in the context of the coronavirus pandemic and vaccinations.

“The ‘Russian World’ concept suggests that Russia is behind all global achievements. Throughout the past year, we saw how Russia uses critical situations to push its propaganda. That includes Russia’s humanitarian aid to Italy, statements that Europe cannot make it on its own, presenting the Russian vaccine as a scientific breakthrough while disseminating disinformation about other vaccines in the world,” Viktoria Romanyuk said.

Wrapping up the discussion, Valeriy Chaly said Ukraine Crisis Media Center acknowledges the priority given to Ukraine’s information security on the agenda of the Parliament, government, and civil society.

“That is important for Ukraine Crisis Media Center as we started our work against a backdrop of the occupation of Ukraine’s eastern parts, illegal annexation of Crimea, and dissemination of fake news about those acts. The need to debunk those fakes was one of the reasons why UCMC was created. It will stay one of the primary fields of our work,” Valeriy Chaly said.

Ukraine is far more experienced in countering Russia’s disinformation than the EU member states. Ukraine has to unite the European partners, and join forces with them to counter Russia’s hybrid aggression, Valeriy Chaly concluded.