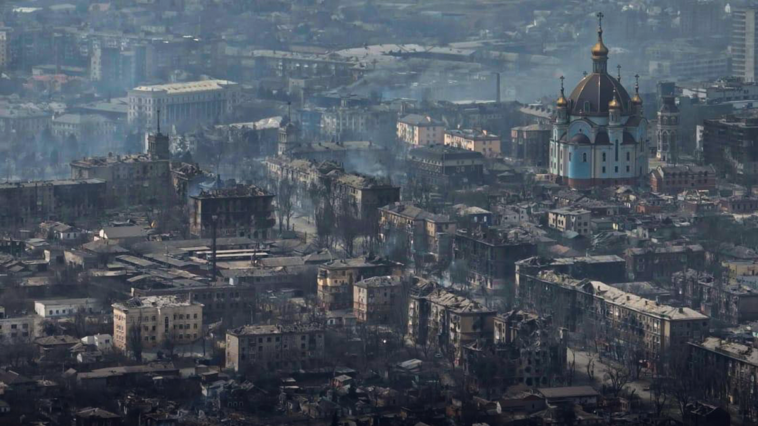 After keeping the world on edge by months of saber-rattling, Vladimir Putin invaded Ukraine on 24 February, belying the litany of assurances from Russia’s spokesmen and diplomats that Russia had no plans for war against Ukraine. They even resorted to the blatant lie that Russia had never attacked anyone first.

Already in 2014 the camouflaged invasion of Ukraine alerted the world to Russia’s covert political and military operations. With his bag of tricks now bared before the world, Putin opened fire. In a sense, Russia’s war demonstrates that its campaign of camouflage has finally failed, forcing Putin to exercise brute force to implement his plans of aggression and occupation. Challenging the predictions of the world, Ukraine has withstood forty days of Russia’s military onslaught and even pushed the Russian forces back out of the Kyiv region. From the start Putin’s invasion united the world against Russia; the courageous and heroic resistance of Ukrainians has impressed the world to an extent rarely seen in recent memory. Clearly, from the beginning Russia was no match in spirit and morale for a country fighting for its very existence. Russia has already lost in the court of world opinion and will certainly lose in the court of world history.

With the goal of overthrowing the government of Volodymyr Zelenskyi stalled, Moscow now seems to be concentrating its war efforts on the east and south, apparently seeking to resurrect its dream of recovering “New Russia.” This move will directly affect the Donbas and Crimea. What will happen next?

In his infamous essay, “Об историческом единстве русских и украинцев,” (“On the historical unity of Russians and Ukrainians”) published in July 2021, Putin insisted that “Киеву Донбасс просто не нужен.” According to Putin, Russia needs the Donbas and will do what is necessary to get it, whereas Ukraine does not need it. According to Putin, the people in the Donbas do not and will not acknowledge the authority of Kyiv. Moreover, Kyiv’s alleged failure to implement the Minsk agreements means that Kyiv does not want the Donbas. It is easy enough to rebut Putin.

Read more: “This War was Unavoidable”: Russian Colonialism and the Self-Deception of the West

It is true that historically speaking, the Donbas has not readily accepted outside authority. That is why almost every political force, from the liberals to the Bolsheviks to the Ukrainian nationalists found the Donbas politically inhospitable. While the Donbas as a whole may not be particularly welcoming to Kyiv, there is no sign that it is more accepting of Moscow. Poll after poll suggests that the Donbas population are uncommitted. A survey conduced just before Russia’s invasion of Ukraine by a joint team of Ukrainian, British, and Russian researchers, shows that more than half of the respondents were not interested in which government, Kyiv or Moscow, controlled the Donbas. There was little difference between those living under the Kyiv-controlled areas and the Russian occupied ones in the Donbas. (The survey results are discussed in “Will Russia recognize the independence of two eastern Ukraine republics? Here’s what people there think,” The Washington Post, 17 February 2022.) This survey is not encouraging to Kyiv, but neither is it to Moscow. Moreover, given the war conditions that obtained in the the Donbas since 2014, one has to question how accurately this survey reflects the minds of the Donbas population.

More likely, it reflects a survival strategy, that is a political fence-sitting, typical of people living in the borderlands in general, to protect themselves in the event of political change. In addition, the survey results reflect the despair of people in the Donbas for their economic daily survival. Their lives have been shattered by war, and they, especially the elderly, see little possibility of escaping from their economic misery and re-starting their lives elsewhere. There is no way to gauge how the current war has affected the minds of the Donbas people. There is no sign at all that they favor Russia, which has brought yet more death, ruin, and misery to the Donbas and Ukraine. One should remember that under the peaceful conditions of 1991, when the people in the Donbas were able to express themselves freely, they overwhelmingly supported the independence of Ukraine. Until Russia’s invasion in 2014, however unhappy with Kyiv the people in the Donbas may have been, their sense of belonging to Ukraine never withered.

Read more: Our mission is to destroy Russian imperial ideology as a political discourse, and Russia as a neo-imperial expansionist state

As for Kyiv’s alleged failure to implement the Minsk accords, Putin has reinterpreted the accords in a self-serving way and accuses Kyiv of not agreeing with his interpretation. Moreover, if it is agreements in general that are so important to him, why does Putin not honor the Budapest Memorandum on Security Assurances of 1994 in which Russia pledged to respect Ukraine’s territorial integrity? Had Russia not violated the terms of the memorandum, no need for the Minsk agreements would have arisen in the first place.

Putin now presents the war as a special military operation to de-militarize and “de-nazify” Ukraine. Ukraine, according to Putin’s tortured logic, is anti-Russian and is becoming a bridgehead for the West’s march on Russia. The world powers have rightly dismissed his rationale. Instead of strengthening Russia’s security, Putin has immeasurably weakened it by unleashing war against Ukraine. It has united both the European Union and NATO, which were shaken by Putin through a myriad of political maneuvers. The West has reacted to the war with unprecedented economic sanctions and condemnation. Russia’s economy is already suffering greatly, which, in turn, will negatively affect Russia’s defense capacity. Moreover, the world will not trust Russia with its legacy of lies and disinformation for a very long time. What else could be more detrimental to Russian security? By contrast, Ukraine now commands the respect of the world. After the war ends, and it will, the world will extend much help to Ukraine to recover from the war damages. Some nations speak of a new Marshall Plan for Ukraine. Russia now represents the dark past filled with hubris and baseness, whereas Ukraine, in spite of the enormous sacrifice of lives, represents a brighter future full of hope and determination. Under these new circumstances, will the people in the Donbas as a whole prefer Moscow to Kyiv? It is doubtful.

The most important factor in determining the future of Ukraine (including the Donbas) is the West’s unity. If the West maintains its unity, Ukraine will likely survive. If the West’s united front fails, there is real danger of Russia overriding Ukraine. It is imperative for the West to be united against Russia’s aggression.

Putin’s claims about ensuring Russian security by “de-nazifying” Ukraine are a smokescreen. Even Russian military specialists have openly questioned his claims. It is important to understand, however, that behind them lies Russia’s imperialist ambition, a desire to resurrect its imperial glory and its sphere of influence. In this, Russia’s claims resemble the historical course of the Muscovite tsars who justified the “gathering of Rus’.” This is a backward looking, reactionary aspiration of the kind almost all imperialist nations except for China have abandoned after two devastating World Wars. There is no future for such aspiration. In any case, Russia’s relatively modest economic might does not match its huge imperialist ambition.

Read more: In the hands of criminals, history is a deadly weapon

All the same, Putin has been unable to resist the temptation of “gathering Rus’.” Kyiv, the center of Rus’, was to be his prize trophy. Denied the prize by the Ukrainians, Putin now seems to be trying to grab as much Ukrainian land as possible. Even if Moscow succeeds in occupying more of the Donbas (including Mariupol) and parts of southern Ukraine, it would prove extremely costly to maintain them militarily. One can be certain that Moscow has no interest in reviving these areas economically (after so much destruction as seen in Mariupol’). An impoverished Russia will be unwilling and unable to divert its limited resources to the welfare of the occupied lands. In other words, Moscow will leave the Donbas to its own fate. Even in 2014, Moscow initially showed far less interest in the Donbas, historically known as an unmanageable area, than it did in Kharkiv, Odesa, or Crimea. This circumstance affords Kyiv a golden opportunity to win the hearts and minds of the people in the Donbas. Kyiv simply cannot miss this opportunity.

History repeats itself. Putin’s war in 2014 gave rise to a vain euphoria in Russia, but it was sheer tragedy for Ukraine. His war in 2022 is an even greater tragedy for Ukraine, but it will turn out to be a rotten farce for Russia. Putin should have heeded his own people’s favorite saying (taken from the Bible): “Кто с мечом к нам придет, от меча и погибнет!” (“Whoever comes to us with a sword will die by the sword!”) Instead the Ukrainians have spoken loudly, “Хто проти нас з мечем – той від меча й загине”.

Hiroaki Kuromiya is Emeritus Professor of History, Indiana University. He has written on the Donbas, historical and contemporary, the Holodomor, the Great Terror, and other subjects mainly during the Stalin era. His publications include books “Freedom and Terror in the Donbas: A Ukrainian-Russian Borderland, 1870s–1990s”, “The Voices of the Dead: Stalin’s Great Terror in the 1930s”, and “The Eurasian Triangle: Russia, the Caucasus, and Japan, 1904-1945” (with Georges Mamoulia).