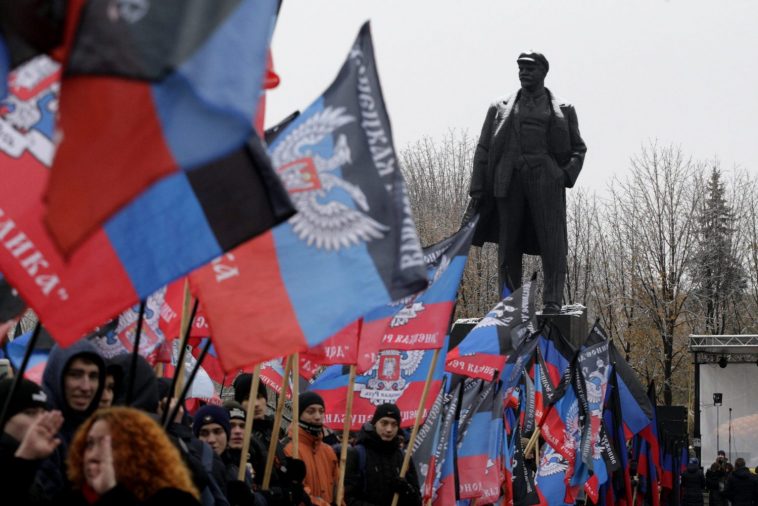 Flags of the so-called Donetsk People's Republic on display at a rally in Donetsk, Ukraine. REUTERS/Alexander Ermochenko

What is “Russkiy Mir”?

“Russkiy Mir” is a Russian quasi-ideology aimed at the expansion of influence abroad and uniting the states considered by the Kremlin as its backyard on the basis of Russian language common history in the Moscow’s perception and Russian Orthodox Church (ROC). As a political concept it gained some importance in 2000s, particularly after Vladimir Putin started using it in his public speeches, making an appeal to the “compatriots” abroad. At the initial stages ROC played a significant role in the development and promotion of the concept, which supported the Kremlin-designed confrontation between the “Russkiy Mir” and Western democracies that are consistently portrayed as hostile on civilizational level and as attempting to enforce their “destructive values” on the other states.  With “Russkiy Mir” Putin’s Russia attempts to establish itself as a civilization-forming state and as a leading geopolitical actor.

As the Russian political elite started to increasingly rely on the concept, it became more linguocentric. Russian language is established as a key unifying factor, and it correlates with the foreign policy of the Russian Federation, the government of which has repeatedly used manipulations around language issues as a pretext for aggressive actions, including military conflict. The Kremlin defines anyone who, according to Vladimir Putin, “speaks and thinks in Russian”, as a part of “Russkiy Mir”. On such grounds Dmitriy Peskov, the spokesperson of the Russian President, has named Ukraine as a part of “Russkiy Mir” in February 2021. It yet again underlines the expansionist nature of the concept and refusal to agree with the national self-determination of other states.

Russian language and its promotion is among the key focus points in a series of the Kremlin’s strategic documents, including the National Security Strategy and the Foreign Policy Concept of Russian Federation. National Security Strategy defines the diminishing role of Russian language in the world as one of the crucial threats along with “the erosion of traditional Russian spiritual and moral values and the weakening of the unity of the Russian Federation’s multinational people by means of external cultural and information expansion (including the spread of poor-quality mass cultural products), propaganda of permissiveness and violence”. Such a definition of threats correlates with the basin principles of “Russkiy Mir”, which, therefore, is enshrined in the main strategic documents that establish the governmental policy at the highest level. It also indicates the second vector of the concept’s exploitation, aimed not only at the expansion of influence abroad, but also at solidifying the multinational country from top downward.

“Russkiy Mir” gained even more importance in 2014, when it became one of the ideological components of the Russian aggression in Crimea and Donbas and was widely exploited by the Kremlin-controlled media as an explanation of the illegal “referendum” and as basis of the “Novorossiya” project in the eastern Ukraine to justify both.

How the Kremlin promotes “Russkiy Mir” in Ukraine

Promotion of “russkiy Mir” is a component of Russian foreign policy and is implemented by a number of actors. They include the networks of the local agents of influence, which may promote specific elements of the concept, thus raising the level of its acceptance by a target society as a whole. Crucial role is played by the institutions that promote Russian “soft power” abroad, in particular “Rossotrudnichestvo” (Federal Agency for the Commonwealth of Independent States Affairs, Compatriots Living Abroad, and International Humanitarian Cooperation) and “Russkiy Mir” foundation, established by Vladimir Putin’s decree in 2007. The foundation has opened approximately 20 centers in Ukraine with the focus on south-eastern regions. Geographically their location coincided with the “Novorossiya” project the Kremlin tried to implement in 2014-15. After the start of Russian aggression the centers were closed, however, both the foundation and Rossotrudnichestvo keep functioning in Ukraine, relying on a network of proxy organizations. These organizations are involved in promotion of historical and territorial revisionism, Russian disinformation narratives and hatred towards Ukrainian state, polarizing society and, according to the Security Service of Ukraine, often serving as a façade for the activities of the intelligence services.

An important role in the promotion of “Russkiy Mir” was played by the Ukrainian Orthodox Church (Moscow Patriarchate) as a subsidiary of ROC. Leader of ROC, Patriarch Kirill, has claimed:

“How can the Russian church not be worried, today and in the future, about the Russkiy Mir that grows from the roots of Rus and the nations of which have been entrusted by God to its pastoral care? Not to do this would be to disobey God himself”.

ROC remains inextricably connected to the expansion and strengthening of this quasi-ideology, ensuring its moral and ethical, in the Kremlin’s perception, basis and granting access to a large conservative audience susceptible to such ideas. Leader of ROC insists that

“Russkiy Mir” is that very special civilization, to which people who call themselves by different names belong – Russians, Ukrainians, Belarusians. People, who have no relation to the Slavic world but who have accepted the cultural component and values of this world as their own, may belong to it”.

Promotion of “Russkiy Mir” by the religious institutions is particularly convenient for the Kremlin, as it allows discrediting any attempts to limit it as interference into religious issues.

It is also worth mentioning that as the concept, first of all, serves political interests of the Russian authorities, it is populist and adaptive. In such a way under the umbrella of “Russkiy Mir” a number of cultural and historical narratives are united, even though they initially may seem to have no relation to it. Still, in the end, rewriting history with the focus on whitewashing the image of USSR, appropriating the victory over Nazism, labeling every attempt to critically evaluate history as “fascist” also work in favor of “Russkiy Mir”. Putin’s Russia grants itself with the messianic title of the vanquisher of absolute evil – and with the opportunity to fight against what it considers fascism again. Systemic cultural appropriation also adds to the picture. It enables the portrayal of formerly colonized states as having a poor culture, with is partially appropriated and partially discredited, while “Russkiy Mir” is pictured as a culturally rich opposite.

The Kremlin consistently discredits pro-democratic policies in target societies, employing disinformation and promotion of destructive narratives, then attempting to offer “Russkiy Mir” as an appealing alternative to such policies. Taking this into account, effective response to the threat should include not only the limitation of activities perpetrated by the Kremlin’s agents of influence, which directly and indirectly promote the concept. It should also include strategic, fact-based positive narrativization that will serve as the best immunity for the target societies – and Ukraine in particular.

¹ National Security Strategy of Russia before 2020.

² “Russian world is a special civilization, which must be saved”, Synodal information department of the Russian Orthodox Church.