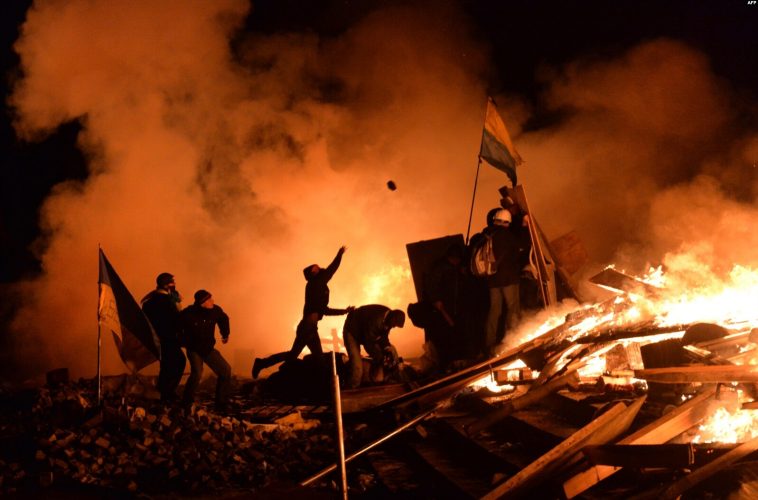 On February 18-20, 2014, continuous protests in Maidan culminated and made history. Heroes of the Heaven’s Hundred lost their lives, and then president Yanukovych fled the country. The present Prosecutor General of Ukraine insists that in 2020, the investigation into the Maidan case advanced, while the Parliament cemented the nation-building role of those events. Meanwhile, the awareness of the events demonstrated by the Ukrainian youth, school children in particular, appears to be in decline. Read on.

Parliament cements the Revolution of Dignity as a historic event

The Revolution of Dignity is a key element of nation-building in Ukraine, reads the declaration made by the Verkhovna Rada (Parliament) of Ukraine ahead of the anniversary of the mass killing of Euromaidan protesters.

The resolution that approves the declaration, passed by the vote of 295 MPs from all factions but the pro-Russian “Opposition Platform – For Life” (Opozytsiyna Platforma – Za Zhyttia).

“The resolution is an act of justice in the first place,” Oleksandra Ustinova, MP of “Golos” (Voice) faction said when presenting the draft at the session hall.

“While the European Court (of Human Rights) recognized Maidan and the Revolution of Dignity a historic event, and gave a legal definition of those events, the Ukrainian Parliament was not able to do that for seven years,” Ustinova said as the resolution was discussed. “We can make a historic step today. As parliamentarians, we can declare that we condemn the actions of some representatives of the Berkut (riot police) unit and the policemen who were killing the people. (We can declare) that we demand that the case is taken to its logical conclusion, and actions of those persons and then state leaders are deemed illegal by court,” the MP proceeded.

Protraction of the investigation unacceptable. Alongside recognizing the Revolution of Dignity a historic event and a key element of nation-building, the resolution of the Parliament underscores that protraction of the investigation into the “Maidan case” is unacceptable, and preserving the memory of the Heaven’s Hundred is important. It also condemns unlawful actions of the officials during the Revolution of Dignity.

Reaction of families of Heaven’s Hundred heroes. Families of the Heaven’s Hundred heroes welcomed the resolution. Yet, it is too early to celebrate the victory, Volodymyr Holodniuk, the father of a Heaven’s Hundred hero said. In the past, the right steps that the authorities were taking, were sometimes annulled through the courts, he added. He is doubtful of the government’s intent to hold liable those responsible for the deadly shooting of the protesters in Euromaidan, after the President swapped the Berkut policemen, as their guilt had been proved and sentences were to be made last summer. Among those let free, were the murderers of his 19-year-old son Ustym Holodniuk.

At the same time, the head of the NGO “Families of the Heaven’s Hundred Heroes” Yuriy Aksenin calls the resolution passed by the Parliament a definite win.

“It will cut, or at least minimize the speculation over the Revolution of Dignity by the hostile pro-Russian forces in Ukraine shouting loud that it was a coup. We’ll be pointing to the Parliament’s decision, and will not let them lie any longer,” Aksenin said.

What is the progress of the Maidan case investigation?

Ahead of the 7th anniversary of the mass killing of the protesters in Instytutska street in Kyiv, investigation authorities and law enforcement intensified their efforts. The State Bureau of Investigation presented to the court the first indictment based on the results of the investigation in absentia. The Office of the Prosecutor General reported that in 2020, they were three times more efficient than in the previous year contributing to the filing of charges within the Maidan case. Meanwhile, the survivors and lawyers say the investigation and court trials continue advancing at a slow pace.

To remind, the Office of the Prosecutor General was stripped of investigative powers as the law was amended. In 2020, the authority to investigate into the Maidan case was transferred to the State Bureau of Investigation.

Results reported by the investigation and prosecution authority. A few days before the 7th anniversary of the deadly shooting of the protesters in Instytutska street, investigators of the State Bureau of Investigation under procedural guidance of the Office of the Prosecutor General sent the first indictment to the court in one of the Maidan cases that came as a result of the investigation in absentia.

Two persons already on the international wanted list were charged with complicity in a criminal organization, abduction of the participants of the Revolution of Dignity Ihor Lutsenko and Yuriy Verbytskyi on January 21, 2014, their torture and premeditated murder of the latter, as well as illegal obstruction of a rally. Two more suspects in the case were earlier arrested, they remain in custody.

Besides, the investigators of the State Investigation Bureau claim they have identified a number of persons who are complicit in the murder of the participants of the Revolution of Dignity Serhiy Nigoyan, Mykhailo Zhyznevskyi, and Roman Senyk in January 2014.

According to the Prosecutor General of Ukraine Iryna Venediktova, in 2020, under the procedural guidance of the prosecutors, the charges in the Maidan case were brought to 42 persons, a threefold increase from 2019. Those charged include 24 employees of the Ministry of Interior, three prosecutors, five judges, and 10 civilians.

Throughout the investigation into the Maidan case, the prosecutors presented to court 110 indictments of 206 persons, Venediktova added. Guilty verdicts that regard 21 persons have come into force.

Commentary of a lawyer. One of the lawyers of the families of the killed protesters of the Revolution of Dignity Vitaliy Tytych said he is convinced that investigation into the majority of the Maidan cases is completed, and protraction occurs in court. Even though the criminal proceedings that regard the key episodes were presented to the court in 2015-2016, those proceedings have not advanced much since, emphasized Tytych. By not exercising justice, investigation results are being destroyed, the lawyer said.

“The progress of the Maidan case is closely linked to the social and political environment in Ukraine. I don’t like the word, but that’s what it is – retaliation. The previous administration committed to conducting the investigation, they put their hands over their hearts and said it was a matter of honor, and they owed politically. The present group acceded to power directly saying that they owe nothing to anyone. It marked the trials and investigation respectively.”

“After the Department of Special Investigations was destroyed, (the unit within the Office of the Prosecutor General) that was investigating into the cases on the protests of 2013-2014 and the crimes committed during the protests, and after the cases were passed to the state Investigation Bureau, investigation was actually not conducted. Some accomplishments are being finalized and presented to court. That’s hardly an investigation procedure. Investigation is actually halted and completely destroyed. What’s key, its concept is destroyed. It was destroyed by the previous Prosecutor General already. That’s the general concept that links together all the crimes that share the same strategy, intent, and goal pursued by the organizers of those crimes. They were committed by the criminal organization created by Yanukovych. The entire concept was refused, and so afterwards, the prospects of the investigation progress are faint,” Vitaliy Tytych said.

What do young people think?

Time is the enemy of both the investigation progress and the awareness of Ukrainians about those events. Seven years after, there is a new generation that has no memories of the events, and studies them as history at school.

“Socioinform” research center conducted a survey to measure the awareness of Ukrainian school-age children of the events of 2013-2014. The poll was commissioned by the National Museum of the Revolution of Dignity, and supported by the National Memorial of Heaven’s Hundred Heroes.

The survey was conducted on December 6-22, 2020 in focus groups and through questionnaires, interviewing a total of 1,200 school children in classes six through 11 across Ukraine.

According to Anton Drobovych, head of the Ukrainian Institute of National Memory, the government, museums, and the school children themselves need to put more effort to change the situation.

Heroes of the Heaven’s HundredMaidanthe Revolution of Dignity