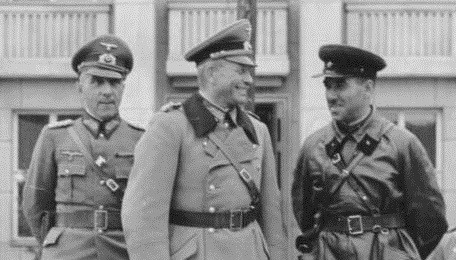 September 17, 2019 marks 80 years since the Soviet Union invaded Poland, joining the WWII on the side of Nazi Germany. This uncanny affiliation is a substantial challenge for the Kremlin, who has all but privatized defeat of Nazism in Europe and incorporates the whitewashed, reinvented version of the Soviet history into its modern political mythology.

When the accusations are impossible to dismiss, Russian government turns to distorting historical facts leading up to them — blaming the others for “rewriting history” at the same time. In this regard, Russian state-controlled media has turned Poland from victim of the Nazi-Soviet aggression into an imperialist state responsible for the start of hostilities.

This narrative is largely built on the following intertwined messages that have been disseminated by the Russian media for several years at the very least:

The latter message is not unique, since “restoration of historical justness” was broadly used as an argument to support annexation of Crimea in 2014. It is also far from being the only similarity in how Russian media describes Poland and Ukraine. Recurring portrayal of both states as merely American marionettes, deprived of sovereignty and having all the important decisions made by Washington, is another common narrative. It contributes to the image of the USA as a global adversary to the Kremlin that interferes with internal affairs of other states all over the world, thus giving Russian Federation the excuse to do just that but under the false pretense of playing defense. Polish status as a member of NATO (equaled, again, solely to the USA) is key factor consistently underlined as a threat by top TV channels in Russia.

Accusations of “Russophobia” are also the approach adopted by Moscow regarding both states. This label, artificial nature of which is emphasized by the fact that it became widely used after attacking Ukraine in 2014 as a retort to international condemnation, is a universal instrument in Kremlin’s disinformation tool-kit. Almost all Western governments have been accused of Russophobia on one occasion or another, but usually as a response to the steps that directly involved Russia. For example, the United Kingdom was blamed for “anti-Russian hysteria” due to pursuing the Skripal poisoning case, Denmark — for stalling the Nord Stream 2 project, Georgia — when anti-Russian protests in Tbilisi resulted in a hasty departure of the Moscow’s delegation.

In case of Poland and Ukraine, the ground for such accusations is broader and often deals with political decisions internal to the respective governments. They typically involve critical approach to the Soviet history, much treasured by the Kremlin, and attempts to diminish Russian grasp on the local socio-cultural life, a notion of special importance to Ukraine. In this regard, special attention is paid by the Kremlin media to the Soviet monuments, any attempt to remove or relocate which is met with vehement criticism — and those very accusations of Russophobia.

All of the abovementioned narratives constitute a part of the broader disinformation system, targeting the West with the goal to undermine its unity and weaken its ability to stand up to the Kremlin. In this particular case, however, Poland and Ukraine being attacked in the same manner by the same roughly adjusted instrument might just become a consolidation point for both states — something that is much needed at the background of Russia’s creeping return to the hearts of some Western European leaders.