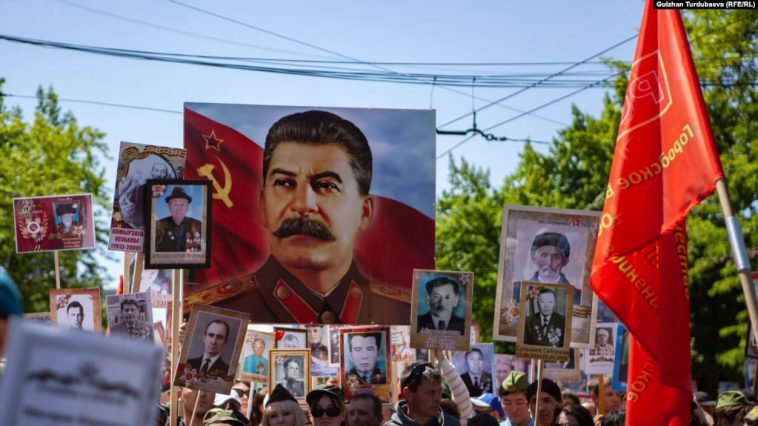 Portrait of Stalin at the IR march in Kyrgyzstan, 2019 RFE/RL

The Immortal Regiment is an annual event at which Russians — and not only them — commemorate the relatives who fought in the Great Patriotic War, 1941–1945. The tradition that includes marching with the portraits of the fallen and those who survived the hostilities started in 2011 in the Russian city of Tomsk with “The Immortal Regiment” civic initiative, non-profitable and non-governmental. Considering that the countries of the former Soviet Union suffered the heaviest losses in WWII — the death toll reached 27 million — the initial desire to preserve the memory of these events is understandable. However, what started as a civic action transformed into a tool of influence and a part of “defeating fascism” political franchise, heavily employed by the Russian government in its internal and external policies, after authorities took control over the initiative.

In 2015 a parallel structure with a similar name was formed — “The Immortal Regiment of Russia”. Its founder is N. Zemtsov, a former member of the initial Immortal Regiment, who was excluded from organization for violating its statute. Setting up the doppelganger organization was, for him, a favorable turn of events: authorities gladly took it under their wing from the very beginning. Given the authoritarian nature of Russian government, it comes as no surprise that as soon as the IR started gaining popularity, it presented the Kremlin with two choices: to capture it or to ruin it.

As a powerful large-scale movement, centered on the politicized topic of war, it could not be left unattended. Undermining such initiative would be very expensive for Kremlin in terms of the stability and loyalty of population. Moreover, IR could be easily fit in the framework of “defeating fascism” paradigm, convenient for Moscow that frequently slaps a label of “fascist” on the foreign policies it does not like — and often claims that as it had defeated it once, it can be done again. So from 2015 “The Immortal Regiment of Russia” has been enjoying heavy support on behalf of the Kremlin; in 2016 Mr Zemtsov was elected as an MP to State Duma, which illustrates the formalized ties between the new, substitute organization and federal government.

Having established control over the movement and securing its convenience, Russian government started widely using it for political purposes. At home they mostly relate to image: highest ranking officials, including V.Putin himself, take part in the annual march, gaining approval points for commemorating the tragedy. The IR, however, is not limited to Russia. It has been exported to other countries in almost the same manner: on certain occasions, people would have local commemorative traditions, similar to IR, but they would get drawn into the influence field of IR, which was centralized, well organized and financially supported. Russian officials in other countries typically take part in the march; for example, on May 9, 2019, Russia’s Permanent Representative to the United Nations, V. Nebenzya, joined the IR in the USA. The US, however, are far from being the only state where IR takes place — as for today, there are close to 80 countries where initiative is held. Considering that the majority of them joined the list in 2015–2016, soon after the movement was captured by Russian authorities, governmental involvement in promoting the IR abroad becomes obvious.

The reason for such efforts is rather simple. IR abroad is often, on the grassroot level, genuinely supported by those who want to preserve the memory of their relatives who fought in the war and who refer to the titular goals declared by the movement — to protect the personal history of WWII in every family. Behind these rather appealing declarations, however, there is a bigger plan. By centralizing the commemorative practices and keeping them in check, the Kremlin also centralizes and seizes control over historical narrative in respect to WWII. It has created a safe informational environment, where this narrative can be easily promoted, and by tapping into it those who join the IR, orchestrated by Moscow, become vulnerable themselves and spread the narrative further. This way, Russian take of events is popularized, and, first and foremost, this take includes the abovementioned title of vanquisher of fascism — which entails certain responsibility to defeat it once more, should it be necessary.

The IR in Ukraine

…And in the eyes of those who consume Russian media-production, such necessity, without a doubt, exists. Ukraine has been repeatedly portrayed by Russian officials and media alike as a fascist state. Its attempts to adopt a European practice to commemorate the tragedy of WWII at May 8, as opposed to the Soviet-style May 9, which has been heavily used as a militarization tool in Russia with ceremonial military parade being just one example, were met with vehement criticism and more accusations of “fascism”. This year M. Zakharova, a Russian MFA spokesperson, claimed that Ukraine was so busy rewriting history that it forgot when the war ended. Considering that out of 27 million victims on the Soviet side 8–10 million were Ukrainians, Ukraine is far from the desire to forget; it is also moving further away from the desire to celebrate these losses in a manner of public holiday towards honoring and mourning them via Remembrance and Reconciliation Day.

WWII-centered narratives are of highest importance to the Kremlin in building its political legendarium, and it certainly dislikes when states it considers to be in its influence zone, try to deviate from the monopoly.

Supporting the IR in Ukraine is a way to secure such monopoly. Local branch is led by Y.Derkach, who is vocally against current Ukrainian authorities and voices the recurrent Russian narrative about the “coup-de-tat” in Kyiv. Taking into consideration his political background, however, this revelation comes as no surprise: Mr Derkach is a local leader of “Ukrainian choice” in Kharkiv — a platform set by V.Medvedchuk, one of the strongest advocates of Russian influence in Ukraine and a close personal friend to V.Putin. Other Ukrainian politicians associated with the pro-Russian course and former “Party of Regions”, party of the ex-President V.Yanukovych, also support the IR initiative: Y.Boiko, O.Vilkul and V.Novinsky are among them.

Political figures with ties to Moscow are not the only problem IR presents in Ukraine. Perhaps even more important is its ideological influence, its promotion of the symbols associated with Russian aggression (such as St George Ribbon; also, in occupied territories portraits of Russian terrorists who participated in occupation are taken to the march) and absence of rethinking. The initiative does not offer critical perception of the Soviet Union, its role in beginning of WWII and Stalinist repressions against those who fought at the frontline and whose portraits might even be carried at the march. Such rethinking is of utmost importance — especially to countries like Ukraine that desire to leave influence zone of the state which tries its best not to learn from the historical misdoings of the USSR, but to recreate them.