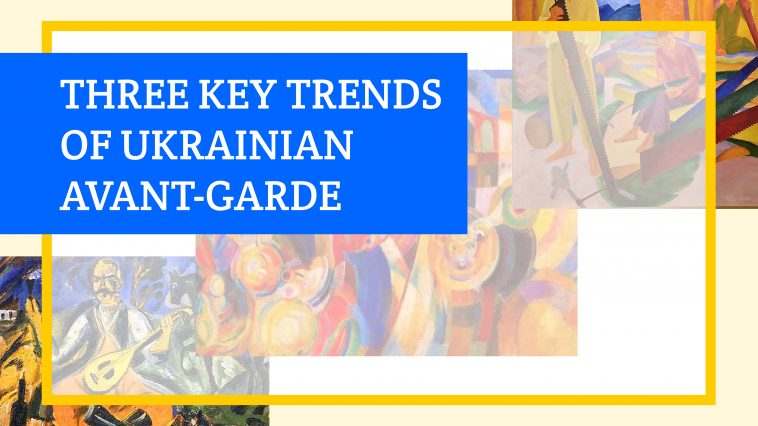 Ukrainian avant-garde didn’t have a lot of time to blossom – the art movement lasted for approximately 20 years, in 1910-1930s. Within this short period it managed to shock, amaze and make a powerful impact that attracted international attention. Even the term itself was coined by a French art historian Andréi Nakov – which happened later, in 1973. This timing makes sense in a way, as Ukrainian avant-garde had profound influence on the nonconformist art of the 1960ies, which led to renewed interest in the sources of its inspiration. And avant-garde born in art schools, artists’ associations, bold exhibitions in Kyiv, Odesa, Kharkiv – as well as in European capitals – keeps inspiring still: it was one of the pillars of modernist revival in 1990ies with its rumbling echoes well heard today.

Scale of the phenomenon is mesmerizing: it included movements such as cubofuturism, spectralism, constructivism and panfuturism. At least 8 associations united artists of all kinds, who created not just paintings, but also poetry, sculptures, innovative scenography, cinema and music, often blurring the lines between different forms of art. To all this variety, however, there were several distinct trends – a guideline of sorts for those who would like to explore the world of Ukrainian avant-garde in more detail.

At the beginning of the XX century, this art movement widely relied on women who made some of the greatest contributions to its development and whose efforts were recognized on par with men. Oleksandra Ekster was a founder of one of the most prominent art schools in Kyiv, which played a role in establishing a whole plethora of new avant-garde artists. She is considered an “amazon of avant-garde” and a co-founder of Cubofuturism. However, her revolutionary spirit fully demonstrated itself in reimagining traditional scenography. She introduced a new approach to decorations, brought the costume creation to a level of dizzying new heights and had influenced the development of Art Deco style. Ekster experimented with textures and spatial structures, paid a lot of attention to contrast, dynamism and rhythm. By the way, Ekster studied under Mykola Pymonenko at the Kyiv School of art, just as Kazymyr Malevych did. Personally acquainted with Picasso, she was a star of European – most of all, French, as the family was forced to emigrate in 1924 – salons and exhibitions.

Sonia Delaunay, known as a French artist, was of Ukrainian and Jewish origin and was another prominent figure to influence Ukrainian avant-garde. Born in a small town in the Poltava region of Ukraine, she grew to become one of the most celebrated – and most versatile – artists of her time. Having moved to Saint Petersburg, then to Germany at the age of 18, she then emigrated to Paris. Together with her husband, Robert Delaunay, she founded a movement known as orphism. The first woman to be honored with an opportunity for exhibition in Louvre in 1964, she brought new concepts and revolutionary ideas to all the forms of art, often mixing them. Delaunay decorated her famous dresses with poems, including Dadaistic ones; just as Oleksandra Ekster, she experimented with theater decorations and fabrics. A fan of bright colors and geometric shapes, Sonia Delaunay developed an amazing legacy, some of which yet stands – for example, the salon she established, REALITES NOUVELLES, is still functional.

2. Unique feature of Ukrainian avant-garde was a combination of folk and high art

Folk motives played an essential role in the creation of avant-garde legacy. They served as a source of inspiration for many artists, including Kazymyr Malevych, who referred to traditional pysanka motifs in his paintings. He was not alone – the above mentioned Oleksandra Ekster was also frequently inspired by folk art and the works of Ukrainian craftsmen, just as Davyd Burliuk. Burliuk, a futurist poet, art theorist and a teacher to Vladimir Mayakovskiy according to Mayakovskiy himself, created approximately 15,000 paintings by his own account!

Avant-garde poetry and scenography borrowed a lot from the language of peasants and craftsmen, making artistic linguistics more fluent and rhythmical. Folk culture led to the development of naïve art, and its archetypes were often used by Oleksandr Bohomazov (who managed to reach the level of the best European avant-garde artists despite having very little formal education – he was sometimes referred to as “Ukrainian Picasso”) and Oleksandr Arkhypenko. Arkhypenko’s cubistic sculptures introduced new elements such as sculptural voids; he relied on negative space and often blurred lines between sculpture and painting. He incorporated national motifs in sculptured clothing to reach a more dynamic, vibrant rhythm.

3. Many avant-garde artists had to flee from Soviet repressions

Stalinist repressions that intensified in 1930ies targeted many groups, and intellectual elites including artists were one of those groups. Totalitarian regime persecuted independent thinkers for many reasons, at the same time trying to impose the new “social realist” art that left no place for “bourgeois” avant-garde. It was one of the reasons for Kazymyr Malevych to emigrate from Ukraine. Mykhail Semenko, a futurist poet, was under increasing pressure from authorities that forced him to reject avant-garde – however, this rejection did not save him from arrest and subsequent death sentence in 1937. Les Kurbas, founder of the innovative “Berezil” theater, has also been arrested and first sent to the labor camp – where he also managed to found a local theater. Kurbas was executed in 1937, yet another representative of “Executed Renaissance”, a large group of Ukrainian artists from 1920-1930ies that fell victims to the repressions.

Despite this tragic aspect of history, Ukrainian avant-garde managed to survive in hearts, minds and the influence it had on the further development of art. Perhaps it might witness a revival through the increasing interest towards the artistic experiments of the early XX century – which might yet inspire new vision today.