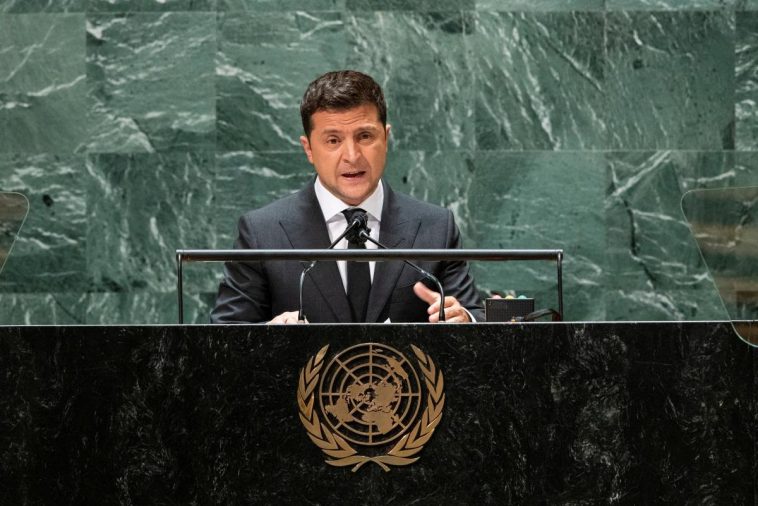 Zelenskyi referred to his strongly worded address as “untypical”. The Ukrainian President called on the member nations to revitalize the UN and criticized the organization’s approach to handling global crises. He also underscored the price that Ukraine is paying for Russia’s aggression. “Time to wake up,” Zelenskyi reiterated the words of the UN Secretary-General.

Here are some highlights from his speech.

Nearly 15 thousand lives claimed in war in Donbas, price of freedom and independence of Ukraine. “In 2019, at this rostrum, I said the war in Ukraine had claimed more than 13 thousand lives, with 30 thousand wounded. Imagine one and a half million people driven from their homes. Each year, I mention the toll at the U.N. (General Assembly), and unfortunately, each year, the toll grows. I spoke about it in 2020. As I speak about it now, in 2021, nearly 15 thousand people have been killed. That’s the price of freedom and independence. Maybe in Central Park or Madison Square, the shots are not as loud as on the industrial outskirts of Avdiivka (‘Promka’) or outside Svitlodarsk.”

Ukraine keen to revive UN, pledges commitment to core principles. “Maybe the UN should move, and be mobile and agile. Maybe we should meet in places where we can hear and see global problems. There are thousands of hot spots in the world. Ukraine will eagerly participate in UN meetings held near them.”

“Ukraine completed the rescue operation in one day to get civilians out of Kabul. Our military evacuated nearly 700 people. (…) Forty-six nations and international organizations took part in the first summit of the Crimea Platform for de-occupation of Crimea, that’s what commitment to core principles of the UN is. (…) We sent to Italy our medics and supplies. Ukraine helped everyone in need, in times when everyone forgot that the pandemic will not last forever, and all nations will gather here again.”

“Every time we seem to choose a ‘global disaster of the year’. In a year, very few people will remember it, as there will be a new one. Every year, at the Assembly session, the world stuffs threats into a backpack, and carries it for years, while it is already full. If we look inside, there is famine, poverty, illiteracy, lack of potable water and fresh air, and military occupation. We lack time to solve that. But what we really lack is courage. We don’t act as leaders, but as politicians. We are afraid of people’s questions and our accountability. And we leave the door open to step back – we promised you nothing.”

UN as retired superhero: coward in action, lacks faith in itself. The UN is a retired superhero who has forgotten of its power, Zelenskyi said. “He considers himself a burden, a weak, frail, useless old man, whose life was in vain. Or maybe the UN will remember something? More than one billion people have got access to potable water for the first time since 1981. Who explained to the wild world that every person has rights and they need to be protected? Who issued the first document that details them? Who provides 90 million people in 83 countries with food? Who eliminated racial segregation from the planet? Who owns the ‘blue helmets’ that have maintained peace in dozens of countries? Who founded UNESCO that protects the Vatican City, the Versailles, the Acropolis, and some 1,154 unique cultural heritage sites? Who founded UNICEF that protects children in more than 190 countries? A call to unite for children cannot be banal or outdated.”

UN must act on evidence of Russia’s aggression against Ukraine. “Hundreds of thousands of Ukrainians in the occupied territory were issued passports of a foreign state. Is that not an evidence of an international crime, impunity, and disrespect of international law? The Russian Federation officially admits that. It forces Ukrainians to participate in the elections to the Russian parliament. If the UN does not produce a strong response… Would that not prove that it’s too late to revive the UN?”

UN must support the Crimea Platform. “If every nation is given such an effective platform supported by the UN thatsolves problems and operates 24/7, the UN will revive. That’s how ordinary people will rekindle their faith in the UN. (…) The fact that the UN has ignored a platform set to address the violations of international law and oppose occupation sets a precedent of new principles. (…) I invite all the nations to join the common declaration of the Crimea Platform, condemn the occupation and take a stand against forcible redrawing of borders in the world. I am not being ironic when I say that it will always be open to Russia.”

UN Charter and veto power outdated. “To begin with, the UN Charter must be revived. These are not optional recommendations. You will not find the phrase ‘Everyone for themselves’ in it. (…) ‘We are determined’, ‘we confirm our interest to overcome’, ‘we agreed to intensify cooperation’ – how much time, paper and energy have we wasted on that? (…) The UN is not a building, the UN is leaders. They founded the UN 76 years ago. Could they imagine that the veto power will turn into a tool used by a member to blackmail everyone else?”