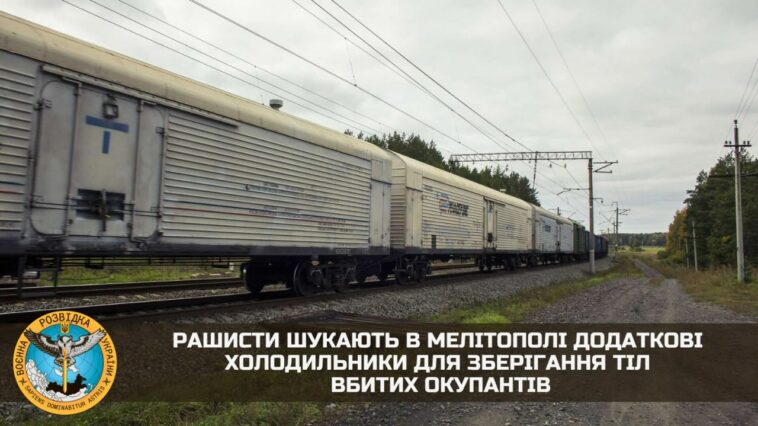 Russians are looking for additional refrigerators in Melitopol to store the bodies of the killed occupiers. This was reported by the Chief Directorate of Intelligence of the Ministry of Defense of Ukraine in the official Telegram channel.

The occupation administration of Melitopol is urgently looking for additional freezers and industrial refrigerators.

According to the intelligence, the city’s meat processing plant, which has been converted into a morgue, is already completely filled with the bodies of the killed occupiers and can no longer accept “cargo 200”.

The agency said that on June 6, the Russian military arrived at Aron-M LLC (Melitopol, 370 Lomonosova Street) and examined its refrigeration chambers. The equipment was found suitable for conversion into a morgue. The company’s management was informed about “the decision to temporarily use them free of charge for the preservation of the bodies of fallen servicemen.” It is noted that the corpses of racists who died during the fighting in the direction of Polohy – Huliaipole are currently being actively delivered to Melitopol.

“These events are connected with the great losses of the occupiers in manpower. In addition, the long-term storage of the bodies of those killed is connected with the intentions of the Russian leadership to hide the real scale of losses from the Russian electorate. Therefore, the so-called “dosed” sending of bodies to the Russian Federation and the maximum stretching of this process in time is practiced,” the intelligence report reads.