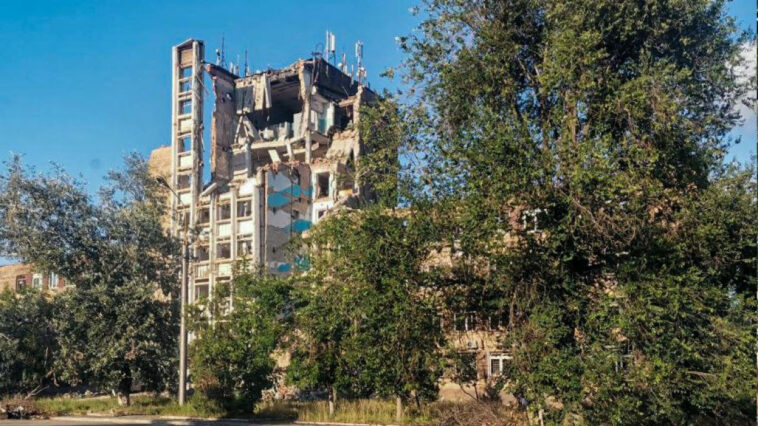 Russians wash the roads while people are dehydrated

Starting from June 30, Russians are washing the streets in the temporarily occupied Mariupol, at a time when the city’s residents themselves are drawing water from puddles after the rain, told Petro Andryushchenko, an adviser to the mayor of Mariupol, on his Telegram channel.

Myr Avenue from Svoboda Square to the Drama Theater is watered daily. At the same time, public showers have been created for people, where they can wash for 10 minutes per person per day.

“Every day, several hundred cubic meters of water are spilled to create a picture of a good life. In a city where the majority of Mariupol residents do not have access to drinking or technical water. In a city where even a public shower is abuse which lasts for 10 minutes per person. Tons of water will be poured exactly where there is almost no life,” the mayor’s advisor is indignant.

In Mariupol, heating will not be restored

Andryushchenko clarified that centralized heating in Mariupol will not be restored due to the impossibility of reconstruction of boiler rooms or gas connections. He also emphasizes that there will be no connection of gas supply to private houses. As for the centralized supply of firewood or coal, it will not exist either.

An exception will be made for the part of the Left Bank district close to the village of Vynohradny and part of the Prymorsky district of the city. But they will do it only if they manage to connect to the gas transportation systems of the Mariupol district.

Instead, the Russians are preparing schools and kindergartens (assembly halls and sports halls) for the residents of Mariupol. Two-story beds and heat guns will be installed. Hot meals, field kitchens, or places for preparing food outside the street are not planned.

“The worst winter in the entire history of the city awaits the people of Mariupol. The occupiers do not need people, they treat Ukrainians like cattle”, concludes Andryushchenko.

In Mariupol, which was destroyed and occupied by the Russian invaders, a new mass grave was found, in which more than 100 victims were buried, told Petro Andryushchenko, an adviser to the mayor of Mariupol, on his Telegram channel. A new mass grave was found on the Left Bank of Kyivska St. 53. There are more than 100 bodies under the rubble. It is obvious that people have been there since the end of February. According to the mayor’s adviser, the occupiers have actually stopped the exhumation of bodies and are engaged in creating a propaganda picture about the supposed restoration of the city.

In addition, the Russians are clearing the rubble nearby, and there is no question of reburial. People actually continue to live in crypts.

“Temporary street graves are gradually turning into permanent graves. Central district, Kotlyarevsky St. 8A, a stone’s throw from the “humanitarian headquarters” of the grave since April,” Andryushchenko adds.

In the Mariupol port, dockside cranes are being launched. According to forecasts, already in the first decade of July, the port will be able to accept cargoes and send shipments of plunder through the main deep-water channel.

Electricity has been separately supplied from the Mariupol district, and port cranes are being started. In fact, the Russians will be able to send looted grain and rolled metal through Syria to Russia.

Andryushchenko added that such a scheme was agreed upon last week by the curator from the State Duma of Russia, Sablin, and representatives of the so-called Donetsk People’s Republic.