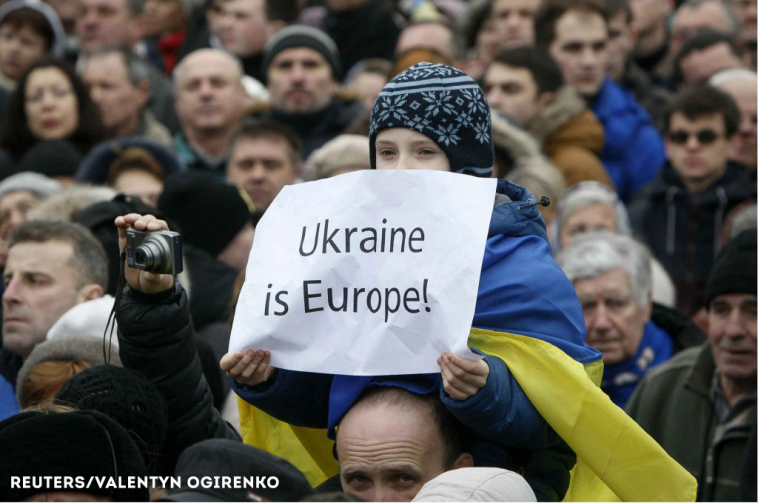 with the support of Diplomatie magazine

7 years have passed since the Euromaidan revolution shook Kyiv, Russia annexed Crimea and the east of Ukraine fell from under the government control.  Ukraine’s relations with Europe and Russia have been transformed by these developments, and Ukraine’s domestic politics shaken by reforms and the unsolvable dilemmas of the Minsk Accords.

With 4 distinguished speakers, we discussed the current situation in Ukraine, its trade relations with the EU, the development of domestic reforms and the situation on the ground in the occupied territories of LNR-DNR.

The dramatic events of Euromaidan were set in motion in the fall of 2013, after then president of Ukraine Victor Yanukovich refused to sign the Association Agreement, meant to facilitate trade relations with the EU. 6.5 years after the Association Agreement was signed in 2014, following a military conflict and a diplomatic fall-out with Russia, Ukraine’s economy has been increasing trade volumes with Europe. Among the EU member-states, Ukraine has strong economic ties with Germany, Poland and Romania. Trade volumes with France remain relatively low, under 2 billion euros a year, but expanding economic partnership with Paris is on top of Kyiv’s agenda. Thus, several trade agreements with large French companies, such as Alstom, are expected to be signed during a planned future visit of President Macron to Ukraine.

Albeit the trade balance is tilted in favor of Europe, Ukraine hopes to grow its exports toward the EU. 14 000 Ukrainian companies are currently trading with Europe in areas ranging from steel, railway equipment and transport. Years of regulatory work to align Ukraine’s standards with those of the EU yield hopes for greater cooperation in industrial sectors and in agriculture, growing wheat and corn exports to Europe, despite a perception by European farmers of Ukraine as a competitor.

To understand Ukraine’s political reform, it is not enough to analyze Ukraine as a pawn in the great power struggle forced to execute the reform demands of the West. The civil society and a vibrant ecosystem of local democracy watchdogs are the main drivers of reform. Considering the lives lost since Euromaidan, Ukraine is at the point of no-return to the previous Russia-inspired governance model.

Situation in the East of Ukraine at DNR-LNR

During years of daily monitoring of the situation at the separatist territories of DNR-LNR, the OSCE has witnessed a marked evolution of the situation on the ground. Immediately after the start of military conflict in the spring of 2014 large parts of the population deserted the occupied parts of the Donetsk and Luhansk regions. In 2019, a relative sense of normalcy has been returning there, with the situation notably improving since the cease-fire of 27 July 2020. At the onset of the military hostilities, only the elderly remained grounded, having no desire to leave and nowhere else to go.  In the last couple of years working age population has been slowly coming back.

Despite these changes, life in LNR-DNR is ridden with hardship. Reliant on Ukrainian government for pensions and social payments, the inhabitants of LNR-DNR have to cross the demarcation line at one of the 5 crossing points, where humiliating administrative procedures make them wait for hours in winter cold or scorching summer heat, sometimes leading to health emergencies and deaths among the elderly. Although physical upkeep of the crossing points has improved under Volodymyr Zelensky, they remain a thorny item of negotiations between the two sides. These conditions have only worsened with COVID, when most of the points remained closed or partly closed through much of 2020.

The Minsk Accords on conflict resolution are at a standstill, as the political clauses remain inacceptable to Ukraine, and the security clauses to Russia. In the meanwhile, Russia has been giving away its passports to the local residents of LNR-DNR as part of its hybrid war strategy. At first, the recipients of Russian passport where individuals who were part of the insurrection structure, as it gave them a guarantee to flee to Russia to avoid persecution in case Kyiv would retake military control of the region. Soon the numbers of willing passport holders expanded to include Ukrainians who had been already working in Russia even before the conflict under the 3-month visa scheme. This “passportisation” strategy now applied in Ukraine has already proven to be efficient for Moscow and destructive for the national governments of Georgia and Moldova, in making the prospects of peaceful resolution of these conflicts unforeseeable in the near future.