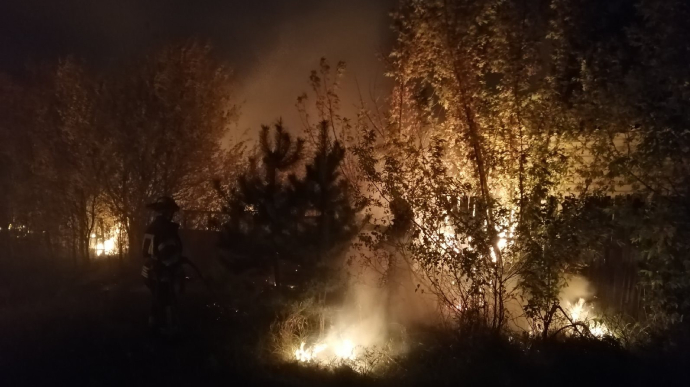 Since October 1, Ukraine’s firefighters have been struggling to contain massive forest fires in Luhansk region. As of this writing, nine to 11 civilians (data varies by source) have been killed in the blaze, over 13 thousand hectares of land are burning in Luhansk region, adjacent to the areas that the government does not control. In this week’s pick, we cover how the fires started, whether they are deliberate, and how the situation unfolds.

As of the morning of October 2, the most dangerous situation is observed between Stanytsia Luhanska and Severodonetsk, where over 30 towns and villages are threatened by fire, the State Emergency Service reported. Over 250 houses have been damaged by fire. Strong winds worsen the situation.

A day earlier, massive fires covered the wooden area in Novoaidarskyi, Starobilskyi, Popasnianskyi, and Stanychno-Luhanskyi districts in the near-front area. Hundreds of civilians were evacuated from the epicenter of the fire, 17 people were hospitalized. On the evening of October 1, the Office of the Prosecutor General said 11 persons were killed by the fires. While on the morning of October 2, the State Emergency Service reported that the victims were nine.

The fire came close to a plant manufacturing disinfectants storing 30 tons of alcohol. It also neared a chlorine injection station (280kg of chlorine), the fire was put out near both sites.

Whose fault is that? In a statement released on October 1, the Joint Forces Operation command said the fires resulted from “deliberate provocations with weapons staged by Russia’s occupation troops.” Interior Minister Arsen Avakov said he does not rule out the version of arsons, police have started a series of criminal proceedings. Investigation is considering four versions of what might have caused the blaze, they range from spontaneous combustion in the grass or woods caused by weather conditions, to the spread of fire after a combat attack by Russia’s proxies.

“Some think that our life here is quiet and peaceful, and there is no war. They even think it’s safe to hold the elections. However, six years in a row, whenever there is a strong wind outburst, fires start within our district,” a statement by the Stanychno-Luhanska state administration posted on Facebook reads.

“They usually start on the bank of the Siverskyi Donets, or further, ignited by a mortar round, tracer ammunition, or antitank grenade launchers,” the statement proceeds.

In the area, the frontline coincides with the Siverskyi Donets river. Stanychno-Luhanska state administration also underscores that “unexplainably”, the fires simultaneously started in several places, on the outskirts of the villages.

Luhansk regional civil-military administration agreed a local ceasefire with the “LPR” militants to be able to recur to the services of firefighting aircraft. Two aircraft and a helicopter are now at work.

At the same time, smoke hampers the use of unmanned aerial vehicles that can spot areas of ignition. Also, border guards said the blaze is accompanied by explosions thought to be caused by detonating ammunition on the front line.

Fires as a systematic problem in Ukraine

Aside from ignition risks on the frontline, this year, Ukraine has recorded a record number of wildfires that mostly start in the east and south.

In the view of the devastating consequences that wildfires have for ecosystems, as well as a sharp increase in the number of wildfires in the past year, Ukraine Crisis Media Center organized an expert discussion to debate the problem.

2020: figures on the rise. According to Serhiy Zibtsev, head of the Regional Eastern European Fire Monitoring Center at the National University of Environmental and Bio-Resource Management, five to seven thousand hectares of land were burnt by wildfires in Ukraine annually. This year, the number has increased to 120 thousand hectares. The scale of fires on agricultural land is almost unchanged year-over-year. In Ukraine, from 500,000 to one million hectares of agricultural land burn annually. Rural population fell the primary victim to the wildfires and fires on farms: in 2020 seven persons were killed and 27 injured (excluding the current fires in Luhansk region).

Why wildfires in Ukraine consistently grow in number. During the discussion at Ukraine Crisis Media Center, MP Oleksandr Marikovskyi (“Servant of the People”, Sluha Narodu faction) said that in the end violations that result in massive fires are man-made. Other reasons he listed include global warming, scarce precipitation, and no fire prevention measures in place.

Yevhenia Zasiadko, head of the climate and transportation department at NGO “Ecodiya”, said: “In the past 30 years, average temperature in Ukraine increased by 1.2 degrees. It raises the risks of wildfires, droughts, and desertification.”

Civil society is also actively proposing ideas. Yevhenia Zasiadko, head of the climate and transportation department at “Ecodiya” NGO elaborated: “Civil society has prepared a road map of action for climate. We’ve developed climatic goals for five sectors that include the targets that will cut the greenhouse gas emissions in Ukraine. More than 30 NGOs have vowed their support for the goals, and more than 30 experts contributed to the draft.”