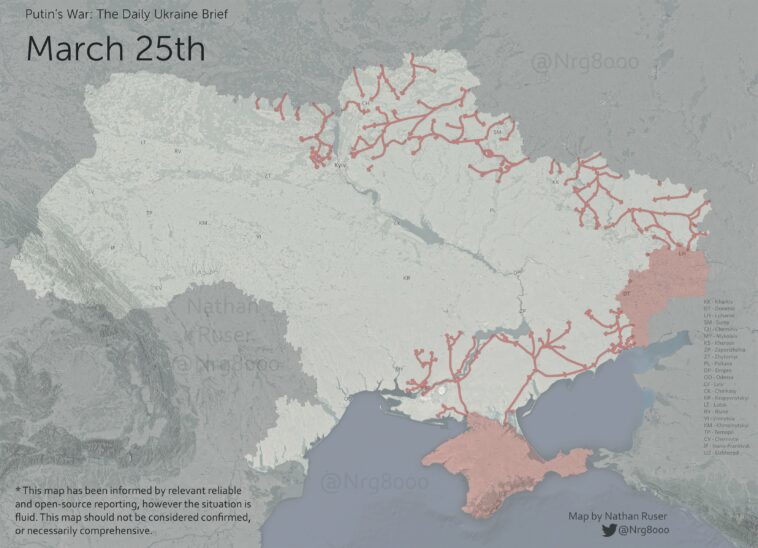 Risk of Russia using chemical weapons against Ukraine grows. Russia’s invasion of Ukraine did not go as planned as the offensive on major Ukrainian cities got stuck and met Ukraine’s fierce resistance. Demoralized troops and exhausted supplies may push Russia to seek other paths. Russia may use chemical weapons in Ukraine, the Center for Countering Disinformation, a National Security and Defense Council’s branch said in a Facebook post. Russia may use sarin, a chemical warfare agent classified as a nerve agent, Ukrainian OSINT group InformNapalm said. Russia could use it in cities if unable to break through the defense.

On March 17, Russian officers in Ukraine were provided with Pralidoxime injections, an antidote for organophosphate poisoning, Ukraine’s intelligence said. On March 20, the Russian command was supplied with atropine, antidote for treatment of exposures to chemical warfare nerve agents.

New missile strikes on Vinnytsia. At around 16:30, the Russian troops conducted a missile strike on the Air Force command in Vinnytsia. Russia launched six cruise missiles, some of which the Ukrainian air defense downed. There were no casualties in the attack, Vinnytsia mayor Serhiy Morhunov said.

Ukrainian forces are fighting to take back control of the city. However, that U.S. assessment has been challenged by Russian officials. Col. Gen. Sergei Rudskoy, the Russian defense ministry’s deputy head of the general staff, on Friday said Kherson region was “under full control”.

Losing Kherson would also put at risk Russian troops fighting in nearby Mykolayiv, the official added. No confirmation came from the Ukrainian command.

Red Cross plans an office in Rostov-on-Don, Ukraine objects. Russia wants to use it to take Ukrainians from the occupied cities to its territory.

Ukraine objects to plans of the International Committee of the Red Cross to open an office in Rostov-on-Don “to operate more effectively” in eastern Ukraine, Minister for Reintegration of the Temporarily Occupied Territories Iryna Vereshchuk told RBC Ukraine.

Russia wants to use it to take Ukrainians from the occupied cities to its territory, the Minister said. “Ukraine objects to ICRC’s plan to open an office in Rostov-on-Don. Russia seeks to ‘consecrate’ the so-called ‘evacuation corridors’ toward its territory, to legitimize abduction and forcible movement of Ukrainians happening now,” Vereshchuk said.

Ukraine presented evidence to humanitarian organizations showing that Russia created filtration camps to abduct the citizens of Mariupol and other cities.

Russia masqueraded its demand of the Red Cross to open an office in Rostov-on-Don for an alleged request by ICRC. Under the Russian aggression, the Red Cross cannot fully exercise its mandate – organize actual humanitarian corridors and access prisoners of war.

Ukraine in Flames #15. Reconstruction plan for Ukraine: proposals and priorities

UKRAINE IN FLAMES project is created by Ukraine Crisis Media Center, Ukrainian Catholic University’s analytical center and NGO “Euroatlantic Course”. We are aiming at searching a loud support for Ukraine in the war started by Russia on the 24th of February 2022.

Ukrainian PM Denys Shmyhal has stated that Ukraine will need at least $565 billion for the initial post-war restoration. The government of Ukraine has already established four special restoration funds. They prioritise infrastructure, economic transformation, small and medium business and Ukraine’s international financial obligations. The EU leaders have discussed possibilities to establish a special fund for the reconstruction of Ukraine, and different schemes are discussed. It is clear that Ukraine can expect a long-term support program as a EU membership candidate. Finally, possible sources of reparation funds in consideration are the arrested Russian and Belarussian assets.

National public opinion on Ukraine’s recovery potential is highly optimistic. 64% of Ukrainians believe that Ukraine will need less than 5 years to restore the damage caused by war, Western Ukraine and young people being the most confident. 61% of Ukrainians are prepared to contribute financially or manually, while only 5% believe that restoration is an exclusive responsibility of the Government. Predictably, 90% of Ukrainians want Russia to pay for damage, but there are also expectations for contributions from the EU (21%), international organisations (17%) and the US (12%).

If you want to support Ukraine against Russian aggression, check the link with recommendations by Ukraine Crisis Media Center – https://uacrisis.org/en/help-ukraine