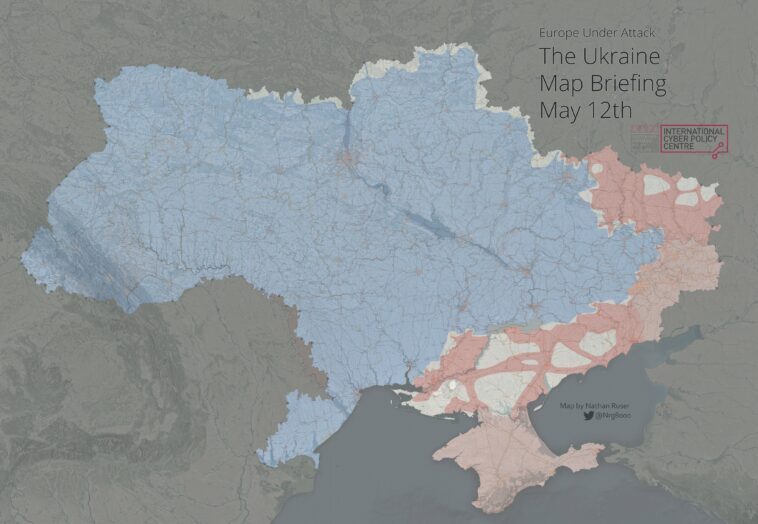 Three people were killed and 12 others were injured as Russia conducted an air strike on Novhorod-Siverskyi in Chernihiv region. On the morning of May 12, Russia conducted a missile strike on Zaporizhzhia. In the evening, it struck the Kremenchuk oil refinery with missiles.

Five hundred people from Azovstal. Ukraine negotiates to evacuate medical workers, wounded military personnel. Ukraine is negotiating to evacuate medical workers and all wounded military personnel, about 500 people in total, said coordinator at the Office of the President of Ukraine in charge of humanitarian corridors Tetyana Lomakina.

“In the past days, we managed to get about 300 people out of Azovstal with the support of the UN and Red Cross. These are women and children. We are negotiating a second round of the humanitarian operation to save the wounded military and medical personnel, about 500 people in total,” Lomakina said in a news conference.

Fire breaks out as Russia strikes at national reserve on Khortytsia Island in Zaporizhzhia, the regional military administration reported. “At 10 a.m. on May 12, Russian forces launched a cruise missile strike on Zaporizhzhia,” spokesperson for the Zaporizhzhia regional military administration Ivan Arefyev said. “The missile hit the national reserve on the Khortytsia Island, causing fire. There are no casualties,” he added. Russia struck Khortytsia, the heartland of the Cossack land and a cradle of Ukraine’s statehood, for the second time. It launched two cruise missiles on Khortytsia on April 21.

Ukrainians honored with Distinguished Leadership Award by Atlantic Council. The Ukrainian people were collectively awarded the Distinguished Leadership Award as the Atlantic Council honored Ukrainians for asserting their freedom in a fight against Russia. Two days earlier, the Pulitzer Prize Board honored Ukrainian journalists with a special citation hailing them for the “courage, endurance and commitment to truthful reporting”.

Ukraine in Flames #63: Сolonialism behind the facade of the “great Russian culture”

The idea of “great Russian culture”, firmly set in many minds, often lacks critical approach and understanding of how this culture was formed, what key values it embodies and how it is connected to Russian imperialism. Throughout the centuries, this imperialism was formed and celebrated by this very culture, which has surprisingly close links to the modern ideas of “Russkiy mir”. Watch Ukraine in Flames #63 to learn more about the “mysterious Russian soul”, cultural frontlines, cultural appropriation and much more.