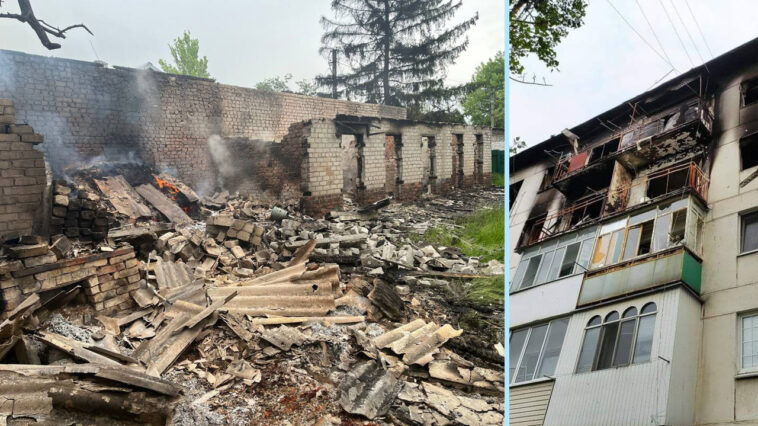 On May 19, 56 Ukrainians sought psychological support after sexual violence by Russian soldiers, Ukraine’s Parliamentary Commissioner for Human Rights Lyudmyla Denisova said. In the past week, most calls to the hotlines came from liberated villages in Kharkiv region, Denisov added. “Nine-year-old triplets, girls were raped by Russians. They have severe genital traumas. [They were raped] in front of their mother. She is in a state of shock. A mother called in. Her nine-month-old daughter was raped by a candle in front of her. A one-year-old boy died after he was raped by two. Two [Russian soldiers] raped a two-year-old girl. She survived,” Denisova said.

Among the rape victims there were older men ages 67 and 78, Denisova added. “That’s an act of genocide committed against the Ukrainian people with particular cruelty. That’s not just violation of international humanitarian law, but is also a denial of its essence and civilized morals,” the human rights commissioner said.

Luhansk region is hottest spot. Twelve civilians were killed and more than 40 wounded as Russia hit Severodonetsk, in Luhansk region on Thursday. The Head of the Luhansk regional military administration Serhiy Hayday said on Telegram: “Since morning, Russians have been shelling Severodonetsk with heavy weapons. Most attacks deliberately target residential houses.”

“Twelve citizens of Severodonetsk were killed, and 40 were injured. [The injured] get medical treatment,” Hayday said.

First Russian soldier goes on trial in Ukraine for murdering civilian. The Office of the Prosecutor General asked the judge for a lifetime in prison for Russian soldier Vadim Shishimarin charged with murdering a civilian in Sumy region. On February 24, Shishimarin’s unit broke through the Ukrainian border from Russia’s Belgorod oblast. He said he did not know he was sent to war, and had a three-day ration pack.

On the morning of February 28, a convoy Shishimarin was in drove through Sumy region toward Russia carrying the wounded. The Ukrainian troops struck the convoy near the village of Hrinchenkove. The vehicles were destroyed, and the Russians split into groups. Shishimarin stayed with four other soldiers.

Between the villages of Chupakhivka and Hrinchenkove they saw a man driving a Volkswagen, and decided to steal the vehicle. They fired at the car. Its owner was lucky to run away and hide.

They turned the car and drove toward Chupakhivka aiming to reach their unit. In the village, they saw a civilian, 62-year-old Oleksandr Shelipov as he was talking on the phone. The Russians thought that he wanted to report them to the Ukrainian troops. Shishimarin shot him dead.

The Russian soldier pleaded guilty. The sentence will be announced Friday.

Explaining Ukraine podcast. Why helping Putin save the face is wrong

We are hearing calls from some political leaders from across the globe calling “not to humiliate” Russia and help Putin save the face. In this episode of the “Explaining Ukraine” podcast we argue why it is wrong. Hosts: Volodymyr Yermolenko, Ukrainian philosopher and journalist, chief editor at UkraineWorld.org, and Tetyana Ogarkova, Ukrainian scholar and journalist who is in charge of international outreach at the Ukraine Crisis Media Centre.

The Russian army has failed to achieve any significant progress in the Donbas during the second phase of the war which lasted since early April 2022. The only gain is Popasna in Lugansk region, but the Russians managed to completely obliterate the town. The special operation is clearly heading towards defeat. Ukraine in Flames #70 describes several scenarios of the Russian army’s grim future in the third phase of the war.

Ihor Semyvolos, head of the Center for Middle East Studies

Mykhailo Samus, Deputy Director for International Affairs of the Center for Army Conversion and Disarmament Studies