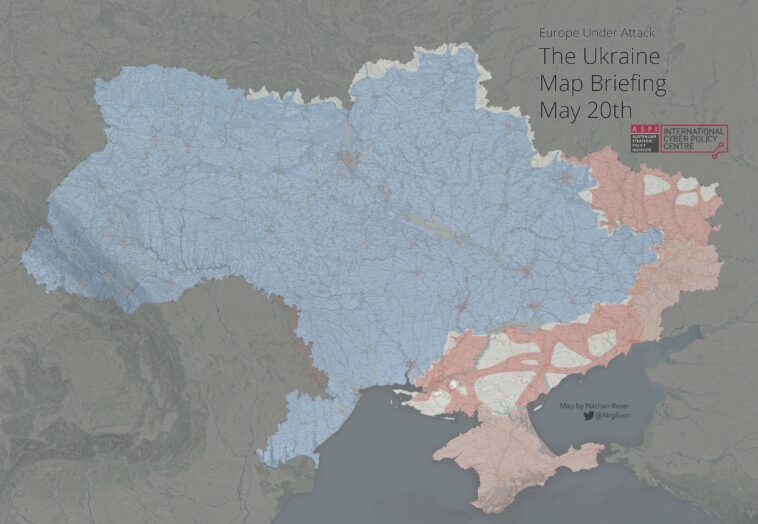 Evacuation of bodies of Ukrainian troops underway at Azovstal. Bodies of Ukrainian service members are being evacuated from the Azovstal steelworks, commander of the Azov regiment Denys Prokopenko said in a video address.

“The Supreme Military Command ordered to save the lives and health of the garrison’s defenders, and to cease defending the city. Despite heavy fighting, [a need to hold] all round defense, and no resupplies, we underscored three important conditions: [evacuation of] civilians, wounded, and dead,” Prokopenko said. Civilians were evacuated. Heavily wounded received the treatment they needed, and were evacuated. They are to be later exchanged and brought to Ukraine-controlled territory, he added.

“Removal of dead heroes [from Azovstal] is underway. I hope that in the near future their families and entire Ukraine will be able to bury their soldiers with honor,” Prokopenko said.

Russia launches more missile strikes. On May 20, a Russian missile strike on the Malynska hromada in Zhytomyr region damaged an infrastructure site and nearly 100 residential houses. Three people were wounded, mayor of Malyn Oleksandr Sytailo reported at 12:40p.m. Friday. On the evening of May 20, Russia conducted a missile strike on Kharkiv. Russian forces struck the Kyiv district of Kharkiv, preliminary reports say. As a result of the attack, fire broke out, State Emergency Service said.

Weapons Ukraine needs for counteroffensive, Ukraine’s military intelligence chief. Ukraine urgently needs medium- and long-range missile systems, large-caliber artillery and strike aircraft, head of the Main Intelligence Department of the Defense Ministry of Ukraine Kyrylo Budanov said in an interview with The Wall Street Journal. Ukrainian troops already begun an offensive in certain points, but a large-scale offensive without these weapons will be very difficult, he explained.

Putin is in an absolute dead end. He cannot stop the war and he cannot win it, Budanov said.

Ukraine would keep fighting until it evicts Russian forces from all of its territory, the military intelligence chief said.

“I don’t know any borders except the borders of 1991,” Budanov said, referring to the year of Ukraine’s restored independence and internationally recognized borders including Crimea and Donbas.

“Who can force Ukraine to freeze the conflict? This is a war of all Ukrainians, and if someone in the world thinks that they can dictate to Ukraine the conditions under which it can or cannot defend itself, then they are seriously mistaken,” he said.

Ukraine in Flames #71: Why the EU membership is vital for Ukraine and beneficial for Europe

The current economic leaders of the EU – France and Germany – should recognise that Ukraine’s membership in the EU will be mutually beneficial. Ukraine is emerging as an important actor in the European security architecture as a result of efficient defense against Russian aggression. After the active phase of the war is over, Ukraine’s resourceful economy and cooperative society can be of significant interest to the EU in the long run. Most importantly, Ukraine is living by European humanistic and democratic values today, even though the price of European choice has been extremely high for Ukrainian society. Ukraine in Flames #71 gives more reasons why Ukraine belongs in the EU.