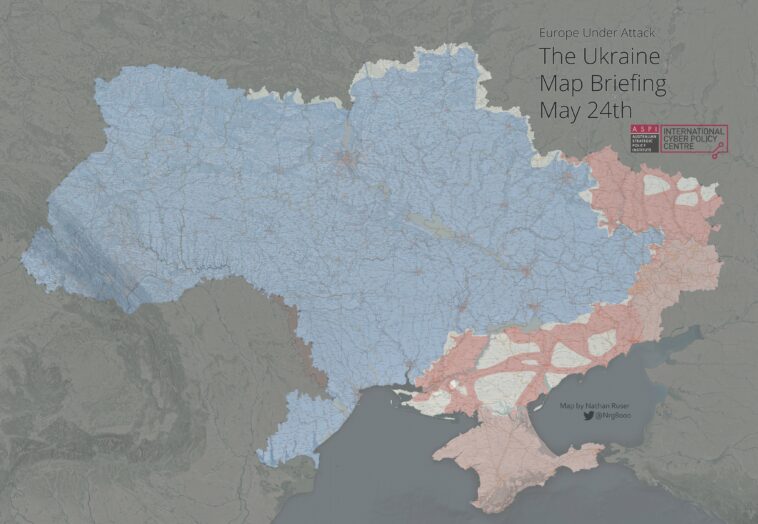 Pro-Kremlin and military groups on social media confirmed reports of Botashev’s death. A Su-25 fighter jet that the 63-year-old major general was flying, was downed near Popasna on May 22. On May 23, Ukraine’s National Guard downed a Russian Su-25 fighter jet over Zaporizhzhia region.

By end of year, Ukraine to enter Crimea, military intelligence chief. Ukrainian Armed Forces may cross the administrative border with temporarily occupied Crimea by the end of the year, the head of the Main Intelligence Department of the Defense Ministry of Ukraine Kyrylo Budanov said in an interview with Ukrainska Pravda.

Russia has 12 months of resources to wage a normal war. Fighting will decrease by the end of the year. Budanov is an intelligence operative who publicly warned of Russia’s full-scale war against Ukraine.

Two girls ages 12 and 15 were raped by Russians. A six-month-old girl was raped with a teaspoon by Russians.

Two twin boys and their mother were at home when five Russian soldiers broke into the house. One was holding the mother, four others raped the boys in pairs. The children died. Three-year-old boy was raped by two in front of his mother. The child died.

Article 27 of the Geneva Convention of 1949 prohibits sexual violence in war.

Three months have passed since Russia started its invasion of Ukraine. In this episode, we draw some key conclusions. Hosts: Volodymyr Yermolenko, Ukrainian philosopher and journalist, chief editor at UkraineWorld.org, and Tetyana Ogarkova, Ukrainian scholar and journalist who is in charge of international outreach at the Ukraine Crisis Media Centre.

Ukraine in Flames #75: How Russia will be held responsible for the war crimes in Ukraine

How is the process of bringing Russia to justice for war crimes going on? Practices of international and Ukrainian courts, what punishment is possible and other issues to explain what is happening in this area. These questions will be covered by speakers in Ukraine in Flames #75.

Mykola Khavroniuk, member of the board of the Centre for policy of Legal Reforms, Professor at the National University of Kyiv-Mohyla Academy