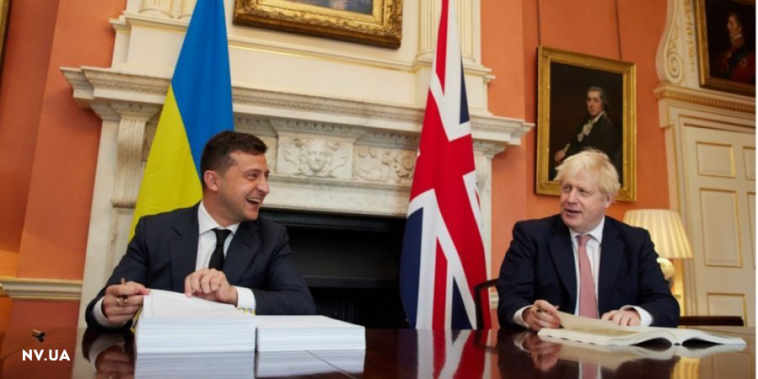 On October 7 and 8, President Volodymyr Zelenskyi of Ukraine visited London. The visit was dubbed “historic” by foreign affairs analysts, as Ukraine and the UK signed two important documents. The first one is the Political, Free Trade and Strategic Partnership Agreement that will replace the EU-Ukraine Association Agreement after Brexit. Second but of no less importance is the Memorandum of Intent that foresees development of Ukraine’s naval capabilities. Ukrainian news media, “Europeiska Pravda” in particular, analyze in detail both documents, UCMC picks the highlights.

The Political, Free Trade and Strategic Partnership Agreement was signed by President Volodymyr Zelenskyi of Ukraine and the UK Prime Minister Boris Johnson.

Ukraine thus preserves all cooperation areas with the UK envisaged by the EU-Ukraine Association Agreement. The only exception is the harmonization of laws that is unique to cooperation between Ukraine and the EU.

Trade liberalization preserved. Regardless of the UK-EU negotiation results, the Agreement guarantees Ukraine’s preferential access to the UK market.

Quotas increased. Ninety-eight per cent of Ukrainian goods will have free access to the UK market. At the same time, as it is a continuity agreement, the partial liberalization logic has been preserved on some product groups, meaning that the volume of goods under the preferential quotas will not change.

At the same time, Ukraine will actually see the increase in tariff quotas, being able to export both to the EU (unchanged quotas) and the UK.

Access conditions to be expanded. The Agreement foresees that it will be reconsidered in two years. Moreover, the declaration enclosed to the Agreement specifies that negotiations to revise the document will start in the second year after the Agreement takes effect, in 2022 respectively.

Yermak at Chatham House comments on the Agreement. Head of the Office of the President Andriy Yermak said the Political, Free Trade and Strategic Partnership Agreement signed between Ukraine and the UK is very ambitious, it embraces a significant number of areas expanding political and economic cooperation between the countries. Yermak spoke at Chatham House, the Royal Institute of International Affairs on October 8.

Chief of the Presidential Office also emphasized that the Agreement is beneficial for both Ukraine and the UK, and will help increase the volume of the bilateral trade that currently amounts to about GBP two billion.

The Agreement will also enhance investment, favor protection of intellectual property, broaden political and economic cooperation, as well as trade in services.

Memorandum of Intent to intensify cooperation in defense sector: what’s key and why it is important

Ukraine and the UK also signed a Memorandum of Intent that will lead to re-equipment of the Naval Forces of Ukraine.

The text of the Memorandum was not released to the public, some details were revealed by “Europeiska Pravda” news media. Signing of the document was communicated by the Office of the President of Ukraine. “Defense Minister of Ukraine Andriy Taran and UK Defence Secretary Ben Wallace signed a memorandum to reinforce cooperation in defense sector and on defense technology,” the statement reads.

Missile boats. According to “Europeiska Pravda”, the Memorandum foresees that the Naval Forces of Ukraine will be equipped with up-to-date missile boats compatible with NATO standards. They will also cover the need in warships of this class in the Black and Azov Sea. according to the agreement, there will be eight boats.

To remind, earlier Ukraine reached an agreement with the U.S. for supply of patrol boats. Also, the Border Guard Service of Ukraine will receive France-produced equipment.

The Embassy of the UK to Ukraine earlier confirmed that the Memorandum is intended to support Ukraine’s ship building capacities. Ukraine will be able to watch and learn as the first boats are being built in the UK, in parallel with modernizing own ship building, the Embassy said.

Where will the boats be built? According to “Europeiska Pravda”, the first two vessels will be constructed at a British shipyard with participation of professionals representing a Ukrainian manufacturer to be defined by the government. Ukraine will take over further production, from manufacturing of the hull to equipping the boats with weapons. Respective Ukrainian shipyard will be chosen by the government and agreed with the UK counterparts.

Funding the agreement. To fund the works, the UK will provide a loan worth of GBP 1.25 billion (approx. USD 1.6 billion) for 10 years. It will also fund the construction of the port infrastructure in Ochakiv that will serve as the base for the warships.

Why is it important for Ukraine? Russia’s aggression and the annexation of Crimea are the difficult challenges that Ukraine is facing. Ukraine is bordering on an aggressive state that is quickly militarizing the Crimea that it occupied. Russia was building up its fleet gradually; it is able to send warships from other regions to the Black Sea. Instead, Ukraine lost the majority of its vessels in the occupied Crimea and has neither financial resources, nor time to build its naval capacities that can compare to those of Russia.

Ukraine needs to be ready to defend itself and repulse Russia’s eventual attacks in the sea. Events of November 2018 when Russia seized three Ukrainian vessels, prove that. It also demonstrated that Ukraine cannot be relying on foreign fleet.

The Ukrainian Armed Forces together with their NATO counterparts adopted the concept of the “Mosquito Fleet”.

The idea is to restrain Russia’s fleet that outnumbers Ukraine’s fleet with “mosquitos” – small and fast vessels. The approach was incorporated into the strategy that the Ukrainian Armed Forces endorsed. The Memorandum of Intent that Ukraine signed with the UK is an important step that contributes to this strategic goal.