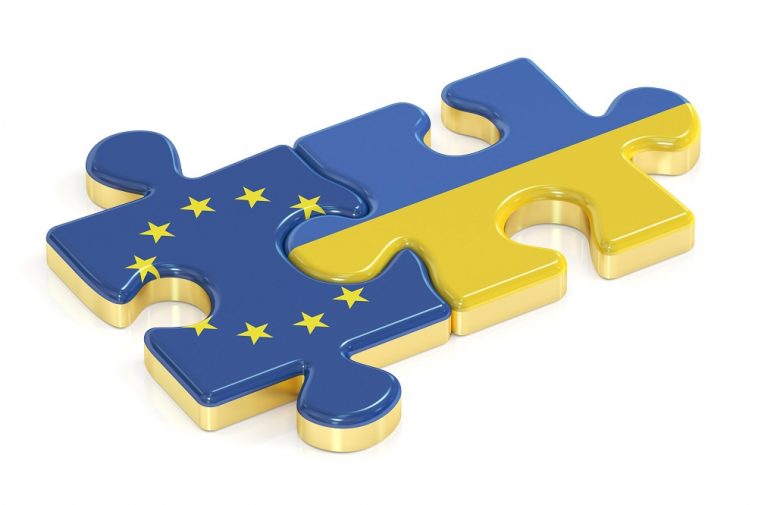 Ahead of the seventh anniversary of the Revolution of Dignity, Ukrainian think tank New Europe Center commissioned a poll to survey public opinion of Ukraine in four EU member states – France, Germany, Poland, and Italy. On November 18, the survey results were released in the presence of EU and Ukraine diplomats, including the Ambassador of France to Ukraine Etienne de Poncins, Ukraine’s Ambassador to Germany Andriy Melnyk, Ukraine’s Ambassador to Poland Andriy Deshchytsia, and minister-counselor at the Embassy of Ukraine to Italy Dmytro Volovnykiv. Full English text of the survey is available at the link. We’ve picked key data and findings of the research, read on.

The survey aimed to discover the views of Ukraine in four EU member states – Germany, France, Italy, and Poland, as well as trace most common associations that European citizens have for Ukraine. Also, the survey updates the results from a similar opinion poll from 2015, allowing to compare how public opinion of Ukraine in the EU has changed, and what they key trends of these changes are.

Methodology. The survey, commissioned by the New Europe Center was held in France, Germany, Italy, and Poland by market research company Kantar and its Profiles division. Over four thousand respondents ages 18 to 65 and older answered six questions, including an open one. In each of the countries, respondents proportionally represented various sex and age groups, and regions. Answers were collected through online polling, held between September 22 and 29, 2020.

War is a far less frequent association for Ukraine. Both in 2015 and 2020, Ukraine is majorly associated with the war. At the same time, by 2020, war- and conflict-related associations for Ukraine have dropped. In 2015, 49 per cent said they associate Ukraine with the war, while in 2020, the number declined fourfold, to 12 per cent.

“Immigrants” rises to a more frequent association. In 2015, the number of answers quoting this association was insignificant. In 2020, it is the third most common association for Ukraine (mentioned by 10.3 per cent). It illustrates the rising migration curve from Ukraine in pursuit of better work prospects in the EU.

Still, negative views of Ukraine prevail. A majority of respondents have negative associations for Ukraine. Majority of the ten most common answers are negative, citing war, poverty, or immigration; the trend extends to all the countries surveyed. Most widespread associations concerned the “war/ conflict with Russia” – 12 per cent, “poverty/ unemployment” – 10.8 per cent, and “immigration/ seasonal workers” – 10.3 per cent. There is not much change from 2015, when the top three mentions of Ukraine were “war” (49 per cent), “Russia” (18 per cent), and poverty (nine per cent).

At the same time, views differ across the countries. In Poland, views of Ukraine are mostly linked to immigrants (25.8 per cent) and poverty (25 per cent), followed by the war. In France, Ukraine is primarily associated with Russia (15.5 per cent), the war and conflicts (13.1 per cent), and Eastern Europe (10.6 per cent). In Germany, the three immediate associations are with the war, intervention to Crimea, and Russia, that was an answer by almost half of the respondents (47.5 per cent). In Germany and France, Russia’s war against Ukraine is a more frequently discussed subject due to the role of Berlin and Paris in the Normandy format.

In Italy, the Russian-Ukrainian war is almost unnoticed by the public – it was mentioned by only 0.6 per cent. Italian citizens have most positive views of Ukraine among the respondents surveyed. Top ten most common associations for the country include just one that is partially negative – “immigrants/ unemployment”, rest are either neutral – “gas/ energy resources”, “politics”, or positive – “culture/ history”, and “Ukrainian friends”.

Terra incognita. Almost one-in-four Europeans (23.6 per cent) have no associations for Ukraine. That is seen as good news, as these respondents can get information on Ukraine and create positive views of the country.

How coronavirus affects enthusiasm to cooperate with Ukraine. Opinions of how Ukraine can be best supported in times of the COVID-19 pandemic are divergent. Roughly half of the citizens see the need to maintain the present level of cooperation or intensify it, while the other half would rather limit the cooperation and have their governments focus on domestic problems.

In countries surveyed, Russian narratives on Ukraine turn inefficient. Only 0.8 per cent said Ukrainians are waging a civil war, while those seeing Ukraine as an extremist/ fascist state trail by 0.2 per cent. Unchanged from 2015, is what is seen as the biggest obstacle on the way towards Ukraine’s accession to the EU; according to the survey, that’s corruption – 43.1 per cent in 2020 (against 37.5 per cent in 2015).

A majority of European citizens (55 per cent) support Ukraine’s accession to the EU. The country’s accession to NATO also finds broad support (38 per cent), but does not get the majority.

In 2020, fewer respondents associate Ukraine with Russia – 9.1 per cent against 18 per cent in 2015. It reflects a clear perception of Ukraine as an independent state. Suggestions to support Ukraine in the face of the Russian aggression ranged from extension of the EU sanctions against Russia (the most common answer, 21.5 per cent) to arming Ukraine, as the least popular one.