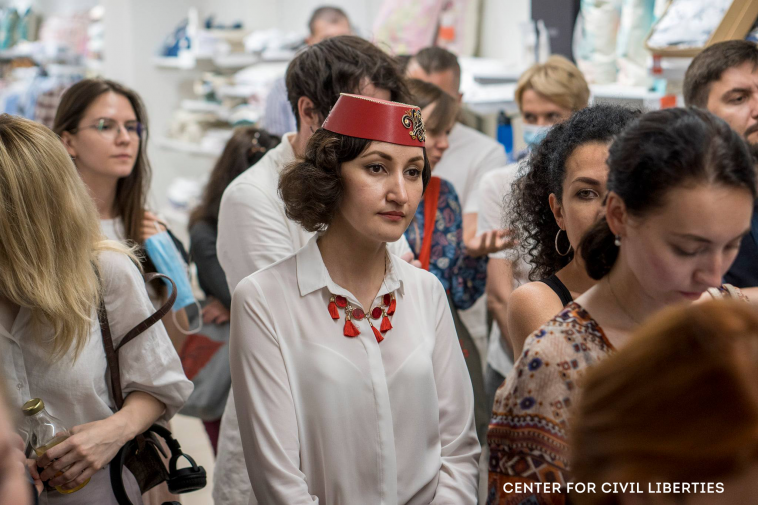 Lately, Russian President Putin has mentioned Ukraine frequently. He recently said that Ukrainians and Russians are one people, and expressed indignation over a fresh law on the indigenous peoples of Ukraine, initially introduced to the Parliament by the President. President Zelenskyi and Ukraine’s Foreign Ministry responded sharply. Here is what’s key in this exchange of words between Ukraine and Russia.

Ukraine, like Russia, is full of “narrow-minded people” that “are ruining the country” particularly by pressuring the opposition, Putin said. He brought an example of his crony Viktor Medvedchuk, a pro-Russian politician who is “unjustly persecuted”, Putin labelled him as “Ukraine nationalist”.

Zelenskyi answers Putin on Ukrainians, Russians being “one people”. Zelenskyi was quick to respond to Putin’s statement. He said that Ukrainians and Russians are not one people. Even if they were one, the flag that flies above the State Duma in Moscow would be yellow-and-blue, he added.

“Let’s finally sort thigs out. Clearly, we are not one people. We have much in common. We share part of history and memory, we are neighbors, we have mixed families, we share the victory over fascism as well as tragedies. But, I repeat, we are not one people. If we were one people, in Moscow, the currency in circulation would most likely be hryvnia, and the flag that flies above the State Duma would be yellow-and-blue. We are definitely not a single people. Each one of us has their own way forward,” Zelenskyi said.

Ukrainians and Russians need to share the goal of ending the war in Donbas and restoring Ukraine’s sovereignty over its territories, the Ukrainian President said. “Also, that’s not possible to say that we are ‘one people’ while seizing our territories and proceeding with the slaughter in Donbas at the same time. That’s obvious,” Zelenskyi said.

Putin’s statements on Ukraine’s “external governance” are a “purely propagandist mantra” crafted for domestic use in Russia, Zelenskyi noted.

“In the real world, all issues concerning Ukraine are decided upon by the Ukrainian government in Ukraine. Those decisions are definitely not made in a neighboring country, or by the ‘shadow mediators’ that are under house arrest or on the wanted list,” the President said.

The recent U.S.-Russia summit has demonstrated that “even the direct talks” between the U.S. and Russian leaders have no authority to decide upon the Ukraine questions, Zelenskyi said.

“We say: ‘nothing about Ukraine without Ukraine’. That’s how our state works. Developments on the global political arena only prove that. What’s more, on July 12, I will have an in-person meeting with the German Chancellor Angela Merkel. My direct talks with the U.S. President Joe Biden are scheduled for late July,” Zelenskyi said.

“Ukrainians and Russians are two separate nations. We could live as good neighbors had Russia not attacked Ukraine in 2014, killing thousands of people, occupying our lands. Full responsibility for the abyss between our nations lies with Putin who launched the aggression,” Dmytro Kuleba twitted.

On May 18, 2021, the Day of Remembrance of Victims of the Deportation of the Crimean Tatar People, President Zelenskyi introduced the draft law on indigenous peoples to the Parliament. The bill does not say a word about Russians. On July 1, the Parliament passed the bill. At the time of this writing, the President has not yet signed it into law.

Putin’s reaction: “a hit on the Russian people”. Putin’s reaction to the bill was unexpectedly strong. In early June, he called the draft law on Ukraine’s indigenous peoples “a strong and serious hit on the Russian people overall.” To speak of Russians as a non-indigenous people of Ukraine is “not just incorrect, but also ridiculous and stupid, it contradicts historical facts,” Putin said. “Division into indigenous, first-class, second-class categories of people and so on – this completely smacks of the theory and practice of Nazi Germany,” the Russian President proceeded.

Ukraine’s Foreign Ministry: Russians are a national minority, not an indigenous people. Commenting on Putin’s statement, the Minister of Foreign Affairs of Ukraine Dmytro Kuleba said that the bill is “fully in line with the UN Declaration on the Rights of Indigenous Peoples and the Constitution of Ukraine, and has nothing to do with the subjective interpretations of the Russian President Vladimir Putin.”

“’Indigenous peoples’ is a universally accepted definition in international law and in the law of many states. It was cemented by the UN Declaration on the Rights of Indigenous Peoples of 2007. The draft law introduced by the President actually implements those provisions of international law into the domestic law,” Kuleba told “Interfax Ukraine” agency.

The Constitution of Ukraine guarantees that all citizens of Ukraine are equal, regardless of ethnicity. It also assigns the responsibility for protection of indigenous peoples and national minorities to the state, Kuleba added.

Russians are a national minority in Ukraine. “Pressure referred to as a result of passing of the bill on indigenous peoples is not true. Rights of the Russian national minority have never been limited in Ukraine. Protection and support to the functioning of the Ukrainian language as the official language is normal. Protecting the right to speak Ukrainian in Ukraine cannot threaten the use of other languages by definition,” the Foreign Minister of Ukraine underscored.

Mejlis: bill on indigenous peoples is key to de-occupation of Crimea. Putin consciously manipulates the terminology in order to promote the notorious narrative of the Russian propaganda, dismantled many times on the alleged persecution of Russians and Russian-speakers in Ukraine, said head of the Mejlis of the Crimean Tatar people Refat Chubarov in an interview with Radio Liberty. Kremlin’s statements saying that Poles, Hungarians, Jews, and other nations were not recognized indigenous peoples of Ukraine despite “living here a long time, and having the right to be called indigenous peoples” aim to sow discord in the Ukrainian society, Chubarov said.

Russians are worried as the summit of the Crimean Platform nears, the head of the Mejlis explained. Speaking on the Day of Remembrance of Victims of the Genocide of the Crimean Tatar People, President Zelenskyi said that restoring and protecting the rights of Crimean Tatars as an indigenous people is at the heart of the strategy for de-occupation and reintegration of the temporarily occupied Crimea and Sevastopol adopted in March, Chubarov reminded.