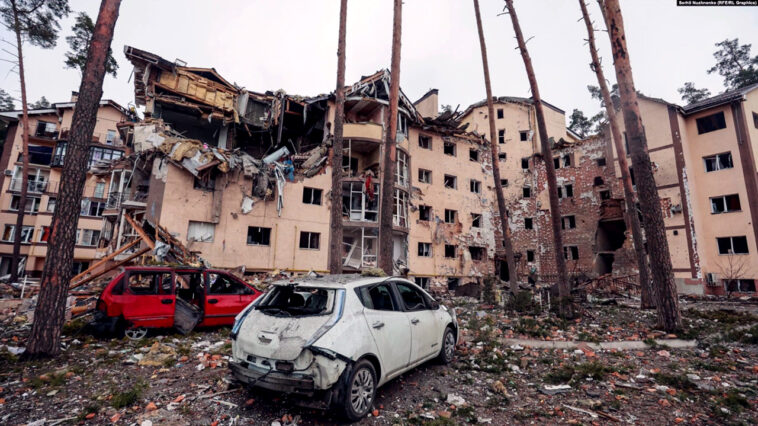 In the city of Irpin, liberated from Russian terrorists, at least 200-300 civilians were killed during the occupation, as well as about 50 servicemen of the Armed Forces of Ukraine. The final information about the victims will be reported after the debris is dismantled.

The mayor of Irpen Oleksandr Markushyn told about it during a briefing, Ukrinform reports.

“Today we don’t have (the number of dead – ed.). But at the time when there was very heavy fighting, when there was shelling for days, people were simply buried in the yards, in the parks. I think about 200-300 people, unfortunately, died”, Markushyin said when asked about civilian casualties from Russian shelling.

He added that many civilians died under the rubble of multi-storey and private buildings, so the time to dismantle it is required.

“We see that 50% of the city has been destroyed… No one has dismantled the blockages yet, and there are surely people there, many of them have evacuated, of course, but many remained”, the mayor added.

According to Markushyn, there are currently about 3,500 people in Irpin.

“Unfortunately, 16 guys from our territorial defense died, 29 are in the hospital. If you also take the Armed Forces, I think up to 50 people were killed, and another 100 were injured”, he said.

The mayor spoke about the atrocities and harassment committed by the Russian terrorists in Irpin.

“The bodies of our dead Ukrainians, civilians were crushed by the Russian occupants with tanks, simply rolled into the asphalt. We will definitely not forgive any of their servicemen. It was scary to look at, although I have already seen a lot”, said the head of Irpin.

Also, according to Markushyn, the occupants were just shooting those residents of Irpin, who did not like the Russian invaders.