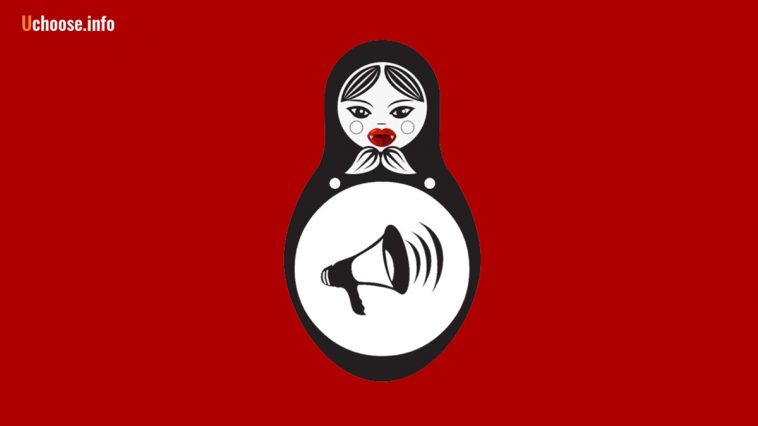 It is no news that Russian media, whether it is Russia’s national television channels or government-financed international broadcasters “Sputnik” and “RT”, are a dangerous information source. At the same time, far less obvious is the danger coming from Russian outlets that allegedly take up a stance against the Kremlin and position themselves as liberal. Olha Yurkova, StopFake co-founder, shared with UCMC’s Uchoose project her vision of why Russian news content is dangerous. Here’s the abridged translated version of the talk for our international readers.

Over the last six years Ukraine has been fighting against Russia in Donbas to protect its independence. However Russian propaganda is still present in our life and our minds.

Numerous surveys confirm that instead of informing, Russian media create and promote propagandist myths. They talk about the vicious Ukrainian army and its soldiers that crucified a child in Donbas, rob groceries and shoot dead its troops infected with COVID-19. In their free time, they say, they retreat due to poor supply – that’s how the disengagement of troops is conveyed.

They expose Ukrainian “Nazi and fascists” who, according to these outlets, not only parade with Hitler’s portraits and draw swastikas on tanks, but also make children play with the plush Hitler toy. Russian outlets are also in try to discredit the newborn Ukrainian Church by calling it non-canonical, claiming it will not get international recognition and stating that the church calls on its parishioners to give a Nazi salute to protect themselves from the coronavirus. It is called to confirm the above myth on Nazi.

They disseminate conspiracy theories about the “decaying West”. They expose insidious America that installed a network of secret laboratories globally, but especially throughout Ukraine and in some rebellious post-Soviet states. The European Union is about to collapse, there is no way it can carry on given its immorality and economic decay.

Finally, they discredit the Ukrainian government, be it former or actual, prone to “negotiate” with Russia or not. This propaganda is in the game not to achieve peace but to prove that Ukraine is a failed state and its only savior is to fall into the arms of its eastern neighbor. The decaying West is an unsuitable partner, you understand. While Russia… But wait, Russia has attacked us in Donbas, hasn’t it? No, hostilities are caused by the civil conflict that should be resolved by Ukraine internally. Russia will just help a little bit. It is another all-around statement of the propaganda.

However notorious outlets like “RIA Novosti”, “Life News”, Orthodox television channel “Tsargrad” and Defense Ministry’s television channel “Zvezda” are just the tip of the iceberg of the propaganda, targeting the undemanding part of Russian audience that watches TV and asks few questions.

Those who do question, are served a different product: expert discussions, scientific research, books, sociology and opinions of “independent bloggers”. It is exactly the audience which Russia’s liberal media, like “Ekho Moskvy” and “Dozhd”, are tailored to. You won’t find crucified children or plush Hitler toys inside. Instead, even true proven facts get easily lost among the numerous versions voiced by the guests hosted by these outlets.

They may find it acceptable to invite to guest “political expert” Sergei Markov, who in 2020 still ardently speaks about the “Kyiv junta” and hints at Belarus “joining” Russia. Not only do the hosts raise no objections, they also play into the guests’ statements, later referring to it as subtle irony. On the day when Russia seized Ukrainian warships they wrote that the Ukrainian army was shelling civilians in Donbas, quoting a news piece by notorious “RIA Novosti” that was disproved even by the so-called “DPR”. They changed the headline to a more precise one only few hours later.

Young YouTube vlogger Yuriy Dud, who, at the first glance, takes the anti-Kremlin stance, and is adored by part of Ukrainian audience, often uses the platform to promote anti-Ukraine sentiment. Thus, he called Maidan a “coup”, occupation of Crimea – “return”, Hryhoriy Skovoroda – “the first philosopher in the Russian Empire”. The space for manipulations is huge. We should remember that words frame our perception, even when they go unnoticed.

These on-target insertions gradually, not at once, shift the mindset of the audience towards the “civil conflict” perception.

How representatives of Russian media work as speakers at international conferences

I had illustrative experience last November, when I was invited to speak at the World Forum for Democracy in Strasbourg. One of the speakers in the discussion on trust to news was the deputy editor of the “Russia Today” channel, who delivered propaganda right on stage. The outlet is known to be one of the most active sources for fake news and Ukraine-related manipulations, while it presents itself as a provider of “alternative views”. The Ukrainian delegation and the Ukrainian School of Political Studies in particular protested, participants from other countries supported their protest that became nearly the event of the day at the conference.

Already before the start of the Forum, we, Ukrainian speakers, sent letters questioning how appropriate participation of toxic RT in the discussion was. In the end, the protest did happen, and propaganda did not win over. But on the same day the address of the editor-in-chief at “Ekho Moskvy” Aleksei Venediktov went almost unnoticed. Speaking in perfect French, he hinted that he cannot say clearly if Russia seized Crimea, or an honest referendum took place. As if no Russian troops had been deployed to the peninsula and international law hadn’t been violated. Tricks that work on international expert audience are the same tricks that work on any other audience. No one was in time to react.

I follow Russian media for professional reasons. I can count on the fingers of one hand the ones in which I came across no manipulations or fakes. Yes, they do exist. I will not share their names – not to feel ashamed after. We have witnessed many times when an honest media started gradually drifting towards “nothing is free from ambiguity” or changed momentarily as its owner changed. Why is it so? Under authoritarian regimes, any form of democracy is an illusion. This is exactly the case in the Russian Federation. Those who “jumped off the ship” spoke a lot about it. Once the media gets visible, it must accept compromises to avoid problems with the authorities.