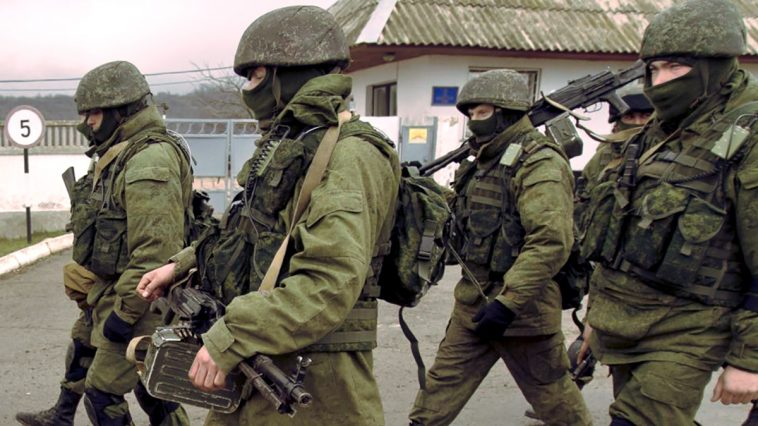 On April 18, in the combat zone in eastern Ukraine, Russia-backed militants violated the ceasefire eight times. One Ukrainian serviceman was fatally wounded. One more serviceman was wounded by shrapnel, he was taken to hospital, the Joint Forces command reported.

The number of attacks by Russia-backed militants, and Ukrainian troops’ casualties is on the rise as Russia masses its troops on Ukraine’s borders.

Russia may complete the build-up at the border with Ukraine on April 20, by that time it would place 110,000 troops, said the head of the Chief Intelligence Directorate of the Defense Ministry of Ukraine Kyrylo Budanov reporting to the parliamentary committee on national security, defense, and intelligence.

According to Col. Budanov, after Russia completes the deployment, the overall number of the troops may amount to 56 battalion tactical groups. Major areas where the troops are massed include the training grounds Opuk and Angarskyi in the temporarily occupied Crimea, and Kalinets and Pogonovo in Bryansk and Voronezh regions.

Under the guise of exercises, Russia builds up the troops and maintains their combat readiness, should the Kremlin adopt a political decision, Col. Budanov added.

Read also: “Russia one step away from starting a large-scale invasion of Ukraine: what has changed in past week”.

“The Federal Chancellor, President Macron, and President Zelenkyi discussed the security situation at the Russia-Ukraine border and in eastern Ukraine. They expressed concern over the build-up of the Russian troops on Ukraine’s border and in the illegally annexed Crimea. They called to withdraw those newly deployed units in order to de-escalate the situation,” the statement released by the German Chancellor’s office reads.

Chancellor Merkel and President Macron underscored their support for the sovereignty and territorial integrity of Ukraine.

“(The leaders) emphasized the need to have the Minsk agreements fully implemented by both parties, and reaffirmed that Germany and France will continue to participate in the Normandy format,” the statement proceeds.

Commenting on the Paris talks, President Zelenskyi said that on April 19, advisors to the Normandy Four leaders will meet to discuss the clusters that are part of the implementation plan of the Minsk agreements.

Ukraine’s European allies will not accept new military operations in the Ukrainian territory, French President Emmanuel Macron told CBS. “I think the situation is unacceptable, Russia, has to de-escalate. This is clear. The situation today and the level of tension at the border is absolutely counterproductive and unacceptable,” President Macron said.

“If we want to be efficient, we have to accelerate the diplomatic agenda and US, Europe, all of us have to be very clear vis-à-vis Russia. We will never accept a new military operations on Ukrainian soil and we have to build the way to be credible vis-à-vis that,” Macron proceeded.

International community has to draw the red lines for Russia, Macron told CBS.

He was declared persona non grata and given 72 hours to leave starting April 19.

Ukraine’s Foreign Affairs Ministry responded by expelling one of the advisors within the Russian Embassy in Kyiv named Chernikov. He was given 72 hours to leave starting April 19.

Tensions rise between Russia and the Czech Republic. On Saturday, April 17, the Czech Republic expelled 18 Russian diplomats suspecting that an ammunition depot explosion in 2014 was organized by Russian military agents.

Most likely, the explosion was set to derail planned weapon supply that had Ukraine among the recipients. Ammunition blasted in a depot in Vrbetice.

Two Russian military agents Aleksandr Mishkin and Anatoly Chepiga under the names Aleksandr Petrov and Ruslan Boshirov, were in Vrbetice on October 15, 2014, one day before the blast happened.

In retaliation for the expulsions, Russia expels 20 Czech diplomats giving them one day to leave. Russia also hinted that it may close the Czech Embassy.

“The pandemic begins to decline. We’ve confronted another uptick in COVID-19 cases, the situation gradually starts to improve,” the Minister wrote on Facebook. Case numbers have stabilized in some regions, they have been declining across Ukraine in the past 10 days, Stepanov added.

Vaccinations. The first shipment of 117,000 doses of the Pfizer-BioNTech Covid vaccine arrived in Ukraine on April 16.

Starting April 13, Ukraine began its rollout of the CoronaVac vaccine made by Sinovac Biotech. Previously, Covishield (AstraZeneca) vaccine was administered.

In the vaccination campaign, Ukraine is to use four vaccines – AstraZeneca, Pfizer-BioNTech, Sinovac, and Novavax. Starting April 17, vaccine doses are also administered to law enforcement personnel.

Since COVID-19 vaccine distribution began, 449,194 doses have been administered. Five people have been fully vaccinated, two of them received their first shot abroad.